« Get the Picture review 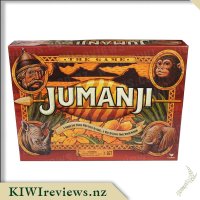 Stalking lions, charging rhinos, snapping crocodiles, and other dangerous creatures - in the wild world of Jumanji, they're only a die roll away!

Grab your pawn, roll the eight-sided number die and move through the jungle. Draw a danger card, then use your decoder to discover the secret message and see if disaster strikes. Your fellow players must race against time to rescue you. The jungle threatens and begins to fill up the Doomsday Grid. If the grid fills up, the jungle will overpower you and your fellow players - everyone loses. If you are the first to reach the centre before the Doomsday Grid fills up, yell "Jumanji!" and win!

A game for those who seek to find ... a way to leave their world behind

The Temple of Elemental Evil
Rating: 5.3

When I saw this on the shelf of my local The Warehouse, I had to point it out to my kids, we all enjoyed the first film and the sequel hadn't long been out (the confused look I got from the shopper standing near us when I asked the kids if they could hear any drumming and my daughter replied "we'd better not play it!"). This looked like it could be a fun, nostalgic nod to a film that I had loved, so even though the price tag felt a little steep, I bought a copy, and I guess that's what the manufacturers were hoping for... Opening it up, it feels cheep, looked like it should have only been a $15 dollar game, not double that, but I tried to not let that stop us from giving it a go.

This game ended up such a bust that we've only played it once and it has simply been sitting there since, whoever created it doesn't really seem to have put much effort into it at all, which is such a shame because the movie is such a classic. When you get a card, you have to decipher it in the middle, a fun little addition to it but the rhymes are nothing great at all, they could have been written so much better. There are times when you all have to roll the dice to get a certain symbol, before the time runs out but because they all have a 'wild' side, this is pathetically easy and there is zero worry about time at all. The game also forces you to roll the exact number to win, so in the end, 75% of this game was rolling the dice and it was far more irritating that fun at all.

For the Jumanji brand, this game is such a let down, it is one of the few games that I been totally bored and annoyed with, simultaneously. This game won't be keeping its place on the shelf once I get onto my spring cleaning.

The Walking Dead is a five-part game series set in the same universe as Robert Kirkman's award-winning comic book series. Play as Lee Everett, a convicted criminal, who has been given a second chance at life in a world devastated by the undead. With corpses returning to life and survivors stopping at nothing to maintain their own safety, ... more...