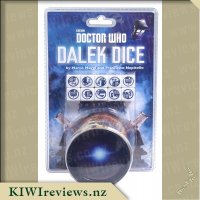 You are a Dalek invading the Earth. INVADE! INVADE! Nothing can stand in your way, not even the humans. EXTERMINATE THE HUMANS! Just make sure you exterminate more humans than your fellow Daleks do to win the game! Watch out for the Doctor as he has a way of foiling your plans.

Dalek Dice is a simple, fun and quick game for two or more players.

Three years ago, I was trawling MightyApe for Doctor Who themed goodies, when I came across this, it also worked out well because I was wanting small, easy to cart around, but fun games that I could take with when my kids had various classes and one or the other needed saving from boredom. We've had this game for about three years now and the container has held up well, though the lid can't close nice and tight, as the rest is just cardboard, so a few times we have worried about missing dice, though we have yet to loose any. The rules also fit in here nicely, which again is handy, especially if the new player wants to give them a quick read first.

My eldest is the one who has most enjoyed this game, wanting to play a few rounds of it, and it is a quick enough game that you can fit in a few games. The game is easy to pick up and whilst there is a little strategy involved, it is also mostly luck, because what you roll determines if you get stopped by the Doctor, get to double your points, or if you need to keep rolling to make sure the Daleks outnumber the humans. This is a game that has lasted us well, we like the Doctor Who theme and the game is nice and easy to learn, it isn't the most amazing game but it is fun.

Played on a round board, players roll dice and move their game pieces in two opposite directions at the same time. They advance their pieces using Roundabout's innovative offensive maneuvers and stymie their opponents with the game's defensive moves. The first player to remove all of his or her pieces from the board is the winner!