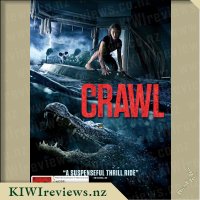 If the storm doesn't get you... they will!

As a category 5 hurricane tears through Florida, Haley (Kaya Scodelario) rushes to find her father Dave (Barry Pepper) who is injured and trapped in the crawl space of their home. With the storm intensifying and water levels rising, the pair face an even bigger threat lurking below the surface. This is an action-packed thrill ride with a nasty bite!

As a fan of every variety of horror film, I knew what I was in for before I had so much as taken the CD out of its pack. It was a further drawcard that Crawl was to be a disaster movie as well, crossing genres just to confuse the viewer. In the end this turned out to be a brilliant move because the combination of killer hurricane and gore works so well! First the gore, then the rain and wind to wash it away. Rewind, repeat! Add to the mix a cute little dog called Sugar (Cso-Cso in real life) and a father-daughter relationship which is dysfunctional, and there is plenty of fun for everyone.

Woven into the plot is the rebirth of the relationship between Haley (Kaya Scodelario) and her father Dave (Barry Pepper). There are flashbacks to Haley's youth when she was close to her father; he encouraged her to pursue her talent for swimming and to aim high. He comes across as a loving but hard taskmaster who saw her ability and was determined that she would not let him down. They also share a love for Sugar, who at times upstages both human actors.

The storyline is predictable so the viewer who is looking for a profound plot with lots of detail is going to be disappointed. The strength of the movie is in its pace which never once falters - I found myself wondering how two people with significant wounds on their legs could move so fast, but I guess I would find the energy too if I were trying to dodge a hungry alligator. As one situation resolved, another was already underway and I even found myself holding my breath in sympathy when Haley had to swim underwater while dodging assorted debris and the occasional alligator. I was also anxious to find out what happened to Sugar; horror films have a tradition of killing off the family pet, but disaster movies sometimes feature the same pet as the saviour - so the plot could go either way. In fairness to the viewer, I will not reveal Sugar's fate.

The title (Crawl) is an apt choice, referencing no less than three separate meanings of the word. First, crawl is a stroke used in swimming; the opening scene shows Haley training with other girls at the swimming pool. Crawl refers also to the somewhat laboured progress of alligators on land. In the water they move extremely fast, but their shape makes them much slower when they leave it. Dave actually mentions this to Haley when she is escaping them - she is running through shallow water in the cellar so is much quicker. And the last meaning of the word is the way you have to move in a confined space; the cellar where Dave and Haley are trapped is described at one point as a "crawl space".

I was impressed by the technologies used in the movie, from the CGI alligators which are suitably huge and scary, to the amazing lighting. Given that most of the movie takes place in a dark cellar - the power is out (luckily so, because there is at least a kilometre of electrical wiring under the water!) - the spotlighting on the actors is a work of art. Even in the darkest of scenes the key areas of each shot are highlighted so that they are easy to see. I have seen many movies where the action in night shots is all but impossible to make out, something which annoys me intensely, so I appreciated the artistry of the chief lighting technician (Pierre Michaud) and his crew.

The musical score was not what I thought would be used in a film of this nature. It was too vanilla to convey the atmosphere of a real horror movie - I had expected something like the themes from Jaws or even Psycho. Maybe it was deliberately chosen to emphasize the tongue-in-cheek approach to the horror/disaster theme. After all, a film that features Bill Haley with See You Later, Alligator over the closing credits cannot take itself too seriously.

However, I would certainly recommend seeing this film. It does what it sets out to do - to entertain - and has no pretensions of being great cinema. It is a movie to watch with a group of friends if only to spot the faux pas - and there are a few of those! Starting with the phone that is losing its battery charge and then happily rings some time later in the cellar... And again, the idea that alligators attack randomly. Even if they were starving, they would first eat their own eggs. In effect, the aggression shown by the alligators in this movie is largely gratuitous. All the same, this is an enjoyable romp. Perhaps comedy should join horror and disaster movie as a tagged genre?

When an airline strike grounds these total strangers together in Paris - and they're forced to share the last ... more...