« Harry Potter and the Goblet of Fire (Illustrated) review 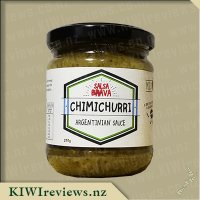 Disclosure StatementFULL DISCLOSURE: A number of units of this product have, at some time, been supplied to KIWIreviews by the company for the purposes of unbiased, independent reviews. No fee was accepted by KIWIreviews or the reviewers themselves - these are genuine, unpaid consumer reviews.
Available:
via online store and selected retail outlets
Samples for Review:

Chimichurri sauce is a classic Argentinian dressing, it will transform your everyday recipes into exotic and delicious meals.

It's as good dolloped onto roast potatoes or roast meat as it is on Argentinian choripan (grilled sausage sandwich). You can also use it to marinate veggies, tofu or to season a roast dinner. We encourage you to discover new delicious uses for your 'Salsa Brava' Chimichurri!

This Chimichurri is our original version, it is Mild - we like to say that it is 'family friendly' as lots of kids love it!

When shopping I always try to look for new interesting ideas to add depth and complexity to the meals I serve. I had not thought to get the Salsa Brava Chimichurri but what a mistake it was to pass up the opportunity to try it!

The Chimichrrui comes in a small jar and has a very nice, simple yet rustic label which I like and with that I think It stands out among the other salsas on the shelf. The label is clear and easy to read, it has all the ingredients listed and calls out the fact that there are no additives, preservatives or added sugars, this means I can use it with all my family meals knowing it is healthy for them. I have a lot of friends who have chosen to become vegan or have gluten free requirements, I would feel confident in adding the Chimichurri to platters at any dinner parties knowing that everyone would be able to take part in enjoying it.

We tried it with BBQ'd lamb and it was delicious! the flavour of herbs accompanied the meal extremely well. I feel that the Salsa Brava Chimchurri would go well with many other types of meats as well like Chicken, Fish, beef, venison even cured meats as well.

I think it is great how they have added some ideas to the label to inspire some options for consumers otherwise it may be quite hard to think of how to use it. I would definitely keep it in mind but would look to see if it came in a bigger jar. I think the size I got would not go far!

This Salsa Brava Chimichurri Sauce Original is interested and I was excited to try it as I have not heard of it before now and or tried it. The glass glass looks fabulous and the salsa looks yummy, I like how I can see it through the jar. I love how it shows/tells you on the side of the jar what the salsa goes best with as I would not have been sure other wise.

It is very universal and goes well with a wide range of foods from meat, steak and sausage, dressings for salads, marinate your fish, dips for snacks and to spice up your breakfast. I tried it with the fresh fish I had caught and it went really well with it. Was a winner from me and my partner. I also tried it at a bbq with friends putting it on the table and fiends added it to there plate. They enjoyed it with their meat and salad. It is a great healthy salsa which is great with the all natural ingredients.

The price is a little up there for the jar of salsa so I guess it comes down to personal choice on what you would spend in your food shopping if you would add it to the chart. But overall its a good salsa and yummy and goes with so many different meats and veges so you get good use from it.

It is not often that I taste something totally unique, but this product is different from any other I have tried. It has a full herbal taste with a slight zing to it, but there is something else that adds an extra dimension of flavour. It is so enticing that I had to stop myself from eating some straight from the jar! Although it is not listed as one of the ingredients, there is a hint of citrus in the background that adds depth and works effectively with the solids. Maybe the fact that the sauce is not finely blended but rather consists of tiny pieces of vegetable and herbs gives it that extra interest.

We served it with a summer salad which included nuts and chunks of feta cheese, and was accompanied by a bowl of cooked grits. Because the grits have little flavour on their own, we added a dollop of chimichurri sauce to each serving and for good measure added some to the salad as well. For a meal that was probably quite healthy, the combined flavours were most enjoyable. We will definitely have the chimichurri jar on hand next time we have grits.

Having tried it in the salad, we then decided to see how it would go with a curried egg recipe. I hard boiled the eggs, halved them, and scooped out the yolks; but instead of mixing them with my usual curry mixture, I mashed them with some chimichurri and olive oil spread. The processed yolks were then replaced in the eggs and the dish decorated with parsley for serving. I passed them round with other hors d'oeuvres but did not say anything - I wanted to see how people would react. They loved them! I told them the secret and showed them the jar only after everyone had had a chance to sample the eggs.

It was becoming clear that this was a highly versatile product which could be used in many different ways. Over the next week I tried it on new potatoes in place of butter, as a filling to add interest to a plain omelette, and on top of poached fish in place of tartare sauce. I even tried it on a cheese and onion sandwich where I would usually add a dash of sweet pickle. We added it to some rather boring takeaway beef burgers to see if we could make them more palatable (it worked!) and mixed it with sour cream to serve as a dip. I would have tried it in more ways but by then the jar was completely empty.

My one reservation is the price. The jar is quite small; although I did my best to ration it, it was obvious that it would not last very long. I would like to see another size introduced, possibly 500g which would be just over twice the current size, at a price which is competitive. There is a place for two sizes in the range; I would buy a larger version by preference as I often prepare food for several people and I can see this sauce becoming one of my go-to choices. I really like it!

Sinfully delightful white chocolate cheese, with a hint of Kahlua.