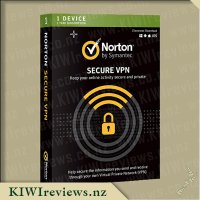 Disclosure StatementFULL DISCLOSURE: A number of units of this product have, at some time, been supplied to KIWIreviews by the company for the purposes of unbiased, independent reviews. No fee was accepted by KIWIreviews or the reviewers themselves - these are genuine, unpaid consumer reviews.
Available:
via secure online portal

Get Bank-Grade Encryption
Bank-grade Wi-Fi security encryption means you can use your Mac, PC or mobile device for secure browsing, even on public Wi-Fi hotspots and unsecured networks.

Browse Anonymously
Lets you browse the Web anonymously so your online privacy is protected from being tracked by online advertisers and other companies.

Access on the Go
With Norton Secure VPN you can even access your favorite websites, videos or apps when travelling.

Block tracking for Ads
Lets you block unwanted tracking technologies to avoid being tracked by online advertisers and other companies.

Sure Cuts a Lot

I don't use public/free wifi on my phone because I am on a plan that accumulates far more rollover data allowance than I use, so I installed it on my 'grab'n'go workstation' laptop instead, which gave me a chance to use this without having to hotspot to my phone for a change. This time around, having learned my lesson back in 2017, I followed the directions from step 1 all the way through, in order. No 'uber tech head' pride this time. This ensured that setup was quick and simple - visit the website, feed in the licence code, then download and run the installer. From start to finish it took less than 3 minutes. If I had copy'n'pasted the code in, it would have been about 2 minutes - you really need to be sure when you manually type the code in.

After it was installed and ready to go, I signed in, gave it permission to activate and I had migrated again, but this time I was apparently located in Auckland, the site of the new VPN hub for NZ - #30 in their network, it appears. The benefits of this for an overseas traveller are immediately obvious - your bank's web interface may query you but it's unlikely to lock you out because of the geographic disparity between your usual banking patterns and this login attempt. What I did notice though was a very slight slow-down in my traffic speed, but so small that you wouldn't notice it unless you were actually looking and had taken a lot of measurements. In realistic terms, for the average user, this added security is nigh-on invisible in terms of performance. In the office, which is a very strong wifi zone, the delay for me was less than 1% of the normal speeds I would expect, and when I went out to use a 'public' zone, it was a little under 4% slower than the benchmark measurements I took before installing it. This means that you shouldn't really notice much than a slightly longer buffering time when watching videos on Facebook or YouTube.

One thing that I did discover with some concern was that Netflix doesn't like it, stating that it wouldn't allow me to view anything until I either turned off the VPN or purchased a premium account. I was on the free trial, so this is clearly a way Netflix avoids 'Global Mode' usage. Another thing to note is that the VPN feature will disable itself if you try to download torrents or capture some streaming services. While this makes sense in terms of preventing illegal downloads, the torrent infrastructure can be used, and is in fact being used, for entirely legitimate purposes when it comes to mass-dissemination of authorised files by some companies and organisations. Some way to filter this function would be welcomed, but likely abused.

The app itself is very simple to use - a few options on the tabs, a few more inside the 'settings' panel (accessed by the cog icon in the top-right of the app window) and that's really it. Turn on at boot, auto-connect to the nearest server, activate/deactivate the VPN, and set your target 'location' are the main ones and are mostly pre-set at install. There's little for the user to mess around with, and thus mess up accidentally. This adds robustness and peace-of-mind in most cases since even a novice user can install it with ease and forget about it, knowing it is doing the job in the background. While it is relatively resource-conversation, it will still put added ticks on the systems clock, meaning your battery will get used up a wee bit faster, but not much. Timing how long the laptop battery stayed active with, and without this active gave results that are, statistically-speaking, no more significant than random noise. The only thing I did notice was the cooling fan ran a little longer and a smidge harder while I had this running, so heat may be the only obvious sign of the added sliver of workload.

Overall, this was even slightly more impressive, but a lot more useful, than the 2017 edition, because the next time I travel overseas I will be able to use all my usual online resources as though I was still in NZ. Every account I have is set to scream then shut down if accessed from outside of NZ, which was something I set in place when I didn't think I would have any need for overseas access. So the price for me also includes that peace-of-mind too. One other point of note, and one that is not related directly to the product, but worthy of note - the new Symantec licence management portal is so smooth and easy to use now. I recall last year, it was quite an issue to manage my software licences, and the interface was cluttered with all the old, expired licences going back almost a decade. Now, it's tidy, clean and uncluttered - a huge improvement and one that has been long overdue. Kudos for that, Symantec!

Turn your 2d building plans, blueprints, or even a simple rough paper drawing into a fully interactive virtual reality model of your construction project.

Visualise your ideas and your plans. ViewBuild Sketch is suitable for residential, commercial and industrial construction projects.

Includes sample context objects and a construction materials library that you can extend with your own digital camera.