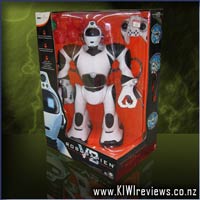 Disclosure StatementFULL DISCLOSURE: A number of units of this product have, at some time, been supplied to KIWIreviews by the company for the purposes of unbiased, independent reviews. No fee was accepted by KIWIreviews or the reviewers themselves - these are genuine, unpaid consumer reviews.
Available:
at Quality Toy and Electronic Retailers

When I first saw this in the flyer I thought it would have been about 12-14 inches tall. When I saw it in the shop, I was stunned at its impressive 56cm stature. It is quite a bit bigger, and heavier than its baby brother, the original robosapien, and also a lot more functional. The new remote design really is somewhat suspiciously familiar to any Xbox player. I had a heap of fun making the robo run around like an escapee from 'Lost in Space' on antidepressants.

My poor cat didnt know whether to attack it or hide under the table and spit. It also has guard functions which have actually saved my house from an attempted home invasion about a week ago. I was woken up by the robo going nutso, grabbed the baseball bat and shot into the lounge to see an arm reaching in thru the catflap. He wont be playing the banjo again any time soon. If nothing else, this cool 'toy' has paid itself off as far as I am concerned. Not only fun, but genuinely worth the price on a number of levels.

WHEEEEEEEE! This has GOT to be the most amazing toy I have had the chance to play with in ages. The successor to the first generation of RoboSapien, this unit has a lot of advanced features, more options, and a FAR easier to deal with remote controller... which bears an uncanny resemblance to a popular games console's handset.

Part of a 'family' of Robo's, which include the RoboPet and the RoboRaptor, this unit has some amazing interaction skills, including the ability to identify and track coloured objects, kick, throw, go bowling, and even dance to it's own music. You can programme in a sequence of movements, to choreograph your own dance routine, or just to make it perform a set task, or you can use the remote in 'puppet mode' where you literally 'drive' it around. It can even lie down, sit, and stand up under it's own power. Sure, that doesn't SOUND impressive, but once you get a chance to see it in action, you'll understand how much of a achievement it is, especially as it has no knees. YOU try to sit down without bending your knees, then you'll understand.

With a stunning array of sensors, including a colour camera, infra-red, sound and contact sensors scattered around it's frame, this little fella will obey the Third Law of Robotics, or will happily switch to 'bulldozer mode' and try and push through the obstruction if you so command it. The strange loops that protrude above it's wrists are actually contact sensors, enabling Robo to sense if he's walking into a wall... they are NOT drink-holders, as one person confidantly informed me when we were discussing it in a local retail outlet. (I had to laugh... drink holders seem to appear everywhere these days... even when they are actually CD drive platters, etc.) I was most impressed with Robo's tracking ability. Grab an object and shove it right up to the face to trigger the tracking system, and Robo will then determine the colour of the object and will turn to track it as you move it slowly around. If Robo detects it is his green bowling ball, or a red bowling pin, he will ask for it, reaching out with his hand. Hand it over, and watch him play. If you give him the ball, he will look for the pins and go bowling, if you hand him a pin, he will place it with the other pins. A clever interactive game.

Now, Robo is not the lightest of toys... so be careful of kids getting in the way, or trying to pick him up. He is packed with servo motors, sensors, and a sturdy chassis... so he's no lightweight. And, as my cat found out, he is not very small-pet friendly... if they don't trigger his sensors, he will happily barge right into them. Surprisingly enough, he didn't trip over my up-until-then sleeping cat, he actually stopped in his tracks as soon as the pressure sensor on the toes of his boots was triggered by the contact, and made some witty remark that scared the poor moggy out of her wits. However, they have since become good friends... if she hears him coming, she stands up and moves out of his way, giving him a good sniffing as he wanders past, before returning to her snooze.

Overall, this is primarily a kids-&-geeks toy, but it also holds some appeal for the Average Joe as well, being a fun way to pass a lazy afternoon. My only little niggle was this: Another recent addition to the 'electronic pets' style of toys, the i-Dog dances to whatever music it can hear or has plugged into it... why doesn't Robo do this too? He has microphones, he has a speaker, he can dance... why not wire in a headphone socket and manufacture a little backpack that will hold a music-player of some denomination, and let him dance to YOUR music instead of just his own? But, that little niggle aside... this has been voted the #1 toy for 2005 by our in-house staff. Full of unexpected humour, you will be laughing as much by what he's saying, as by what he's doing... and his 'Guard Mode' is handy at night too, for when you want that freshly baked cake to stay secure from little fingers at midnight... much to my son's annoyance.

Suitable in indoors and outdoors