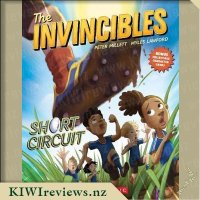 Tana, Scotty, Zinnia, Andrea and Muzza have a giant problem on their hands - their super powers have short-circuited and they've been transformed into itty-bitty-sized Invincibles! Can the fearless footy heroes survive the field of doom and outwit Tricky Ricky and his dastardly deeds before the All Greats' golden history is destroyed in front of their eyes? Or will they be trapped forever in a wild world of man-eating monsters and maniacal mischief makers on the loose?

With hilarious illustrations by Myles Lawford, including a set of bonus character collection cards, this book joins the first in the series (The Invincibles 1: Power Up!) to coincide with the 2019 Rugby World Cup in Japan (September-November 2019).

The Caves of Steel
Rating: 9.5

On reading the first book in the Invincible series with hints of a second book coming my 7 year old has eagerly been waiting to get his hands on a copy. The first book was such a great read for him so I knew he would be happy to sink his teeth into another. Reading hasn't always been something he is keen to do as he has struggled with reading in the early years at school, 2019 has been a year filled with much progress in this department and he is even becoming confident enough to venture into chapter books where before he would look at the sheer number of words on each page and declare it was too hard.

This series has definitely given him a joy for reading and venturing into more challenging titles. As a small chapter book for younger readers there aren't a lot of big or difficult words and they are printed in a larger format to make it easier to read and with added effects on certain words whether it being highlighted or bigger or in a different font it makes it interesting to read for a young reader. He is more than happy to ask for my help if he needs it and loves it when I read aloud with him so we decided to read the story together. When I didn't finish the book in one sitting I know he read ahead but was more than happy to hear the same bits again as the story is hilariously funny.

As with The Invicibles Power Up, this new addition has some great potty humour that young children get a real thrill out of. The story is packed with action on every page to keep you interested in the story and while fast paced there are so many funny adventures that take place. We found it interesting that the Invicibles using their powers for personal gain in a battle of sibling rivalry rather than for good turned out so badly for the Invicibles and probably a very good lesson in what can go wrong. Being tiny even with super powers turns out to be pretty challenging especially with the dangers of rugby players spiky boots, swooping magpies and ginormous insects.

We loved the fact that the Invicibles turned it around to still be able to save the day and the All Greats rugby team once more. They overcame the hurdles placed in their way from being so tiny and managed to out trick Tricky Ricky to save the day in what my son would describe as a really really funny but absolutely disgusting way. Reading how they managed to outsmart Tricky Ricky and save the All Greats medals had us both gasping with cries off ewww yuck.

I really do hope there may be more adventures with the Invicibles coming as the first two books have sealed our love of the series and the characters and we would love to see them once again use their powers. Having these amazing powers that help them knock out their opposition with such things as super smelly farts have been such an appealing way to get master 7 enjoy reading for extended periods of time so I am glad that we have discovered such a great series with a truly relatable storyline for the average kiwi kid. 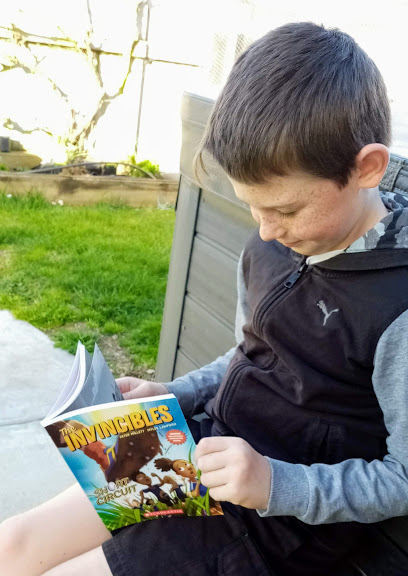 I knew that Miss Seven would enjoy this book as she had thoroughly enjoyed the first in the series, and had been eagerly awaiting the publication of the second. What I had not expected was the reaction of her older brother, who said he would like this one but was prepared to share it! I asked him why he wanted to read it as I thought it might be a bit young for him - after all, he will be ten in December! He then admitted to already "borrowing" the first book from Miss Seven because it sounded so funny when she was reading it to me that he wanted to take himself off and read it on his own.

So Miss Seven graciously agreed to share, and Mr Nine promptly went off to read it so he could give me some feedback. He was not disappointed. As a soccer player himself, he is well into ball sports, so was ready to enjoy the book. It was a quick read for him but judging by the peals of laughter from his perch in the garden he was enjoying every minute. After he had finished, he came back in and said he thought it was one of the funniest books he had ever read. He loved the toilet humour of course (!) and admired Scotty for his prestigious farts. Smells of all kinds are part of every child's world, and the source of a great deal of fun.

Miss Seven and I then read it together - she is now quite capable of reading on her own, but still likes to be read to so we took turns reading aloud. She was fascinated by the thought that being shrunk would suddenly open up a world of unanticipated threats like attacks from hungry magpies or weta, not to mention the scary boots that could squish you without warning. It was a new way of looking at the world from the point of view of a creature the size of a toothbrush; we digressed into a discussion of what a snail might feel like when a bird swooped down on it.

There was just one aspect of the book that she did not like. The first book had yielded a set of collectible character cards which have pride of place on her bedside table. She had been looking forward to adding a second set to them. However, the detachable cards at the back of this book have been printed and scored off centre so that they are different widths - a small point, and one that does not interfere with the actual story, but which did annoy her when she came to remove them.

But overall, another successful book in the series and one enjoyed by both the children. It was interesting to find that my perception of the target audience was wider than I had expected.

I, Geronimo Stilton, was astonished to find myself in the Kingdom of Fantasy for the fourth time. Sterling, the Princess of the Silver Dragons, needed my help!

The last existing dragon egg had been stolen from Sterling. If that egg was destroyed, dragons would become extinct forever! I couldn't let that happen. So my friends and I set out across enchanted lands to find the egg and restore peace to the Kingdom of Fantasy. It was a truly amazing adventure!