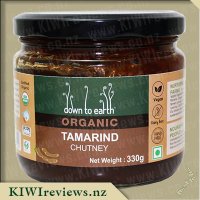 Disclosure StatementFULL DISCLOSURE: A number of units of this product have, at some time, been supplied to KIWIreviews by the company for the purposes of unbiased, independent reviews. No fee was accepted by KIWIreviews or the reviewers themselves - these are genuine, unpaid consumer reviews.
Available:
via online store and selected retail outlets
Samples for Review:

Sweet and sour chutney is a delicious condiment with spring rolls, samosas, chips, crackers, samosas, pakoras, dahi vadas, bhelpuri and any kind of chat. This is also delicious as a dipping sauce for French fries and as a spread over crackers.

Just a dash of this stunning sweet and sour chutney blend spruces up almost all chaat recipes enhances the flavour by leaps and bounds making it a key factor for complete chaat experience. This zesty sweet and tangy dip recipe calls for the use of tamarind, jaggery and roasted cumin powder. Its taste is absolutely lip-smacking.

I tried the Down to Earth Organic Tamarind chutney and fell in love! I found I could use it on almost anything. I put it with cheese and crackers, as a dip for chips, used it as a condiment in sandwiches, I put it out on a platter when we had friends over. They couldn't believe how good it was with carrot and celery sticks. My favorite idea was putting on homemade burgers. The sweet and sour flavor went so well with my Mediterranean style beef patties.

The flavors created with the tamarind and spices reminded me of dates, enough I had to double check the ingredients list. I would definitely get this in the future I think it is a very versatile addition to the fridge.
I love that it is an organic product and comes in a good size. The jar was a little hard to open but defiantly worth the effort once we got in. I feel good serving this up to my family not only is it absolutely delicious its a lot healthier than others you find in the supermarkets.

All in all I think this is a fantastic product and would recommend everyone to grab a jar when they next make a trip to do their shopping. It can be used in so many different ways.

Another great chutney to add to the collection of chutneys in the fridge, If your anything like me and love to entertain people and have platters and yummy foods then you will need to add this to your shopping list. The Down to Earth Organic Chutney Tamarind flavour goes well with hot platter goodies and great for adults and children. We had a big bbq and friends and children over for my oldest sons 11th birthday and had this out and both the adults and children loved it.

I find the flavours are great, the texture is great and overall a winner. You would be able to get a lot of uses from the jar. But in saying that because it is so good it does not last long. You want to go back for more and more. My partner has been smashing it back with nearly everything he eats so its nearly gone. He loves the flavours and loves adding it to the side of his meat at night time with dinner.

Overall a lovely chutney and no complaints on the chutney. Only bad comment I have had overall on all the chutneys was that the label could have a more detailed suggestion on what to pair it with to give people more ideas other then a basic overall suggestion that it currently has. Otherwise the label is fabulous and says all the right things. It is a great little jar of chutney and always a bonus being organic. You may need your partner to open the jar though as the lid can get super tight once the seal is popped and close it again, the grip it gets back on it is tight. Another flavour to add to the shopping list. 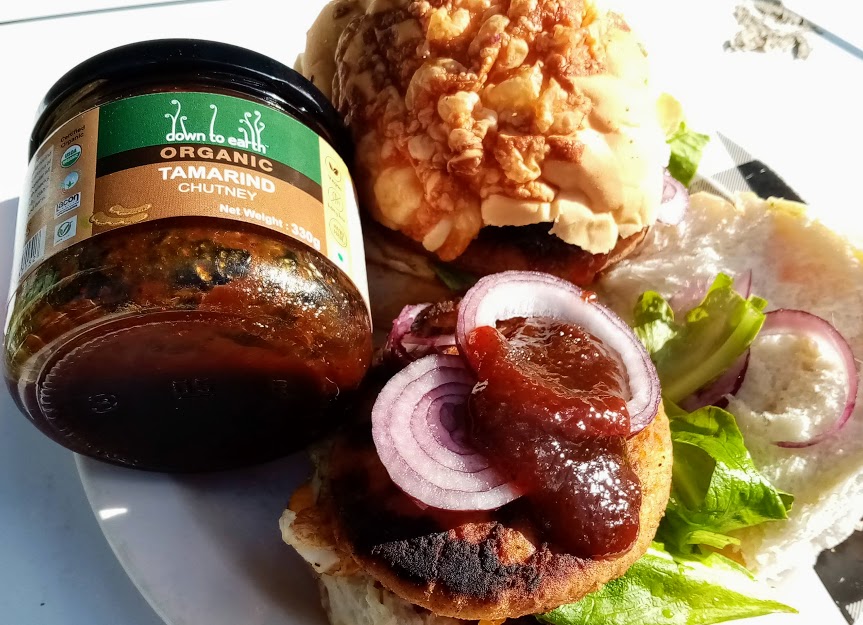 Tamarind is an interesting fruit which is wonderful in all kinds of preserves. It has a tart but sweet flavour which combines effectively with lemon or vinegar (and spices) to produce a delicious addition to many different foods. We were having burgers for lunch, so it seemed like the perfect opportunity to try out DTE's Tamarind Chutney. Because we had been doing some heavy-duty physical work in the garden, the burgers were substantial - chicken patties, onion, lettuce, egg and coleslaw in cheese buns. The chutney completed the meal perfectly, and my son asked for a third burger because he liked it so much.

Although the chutney contains red chilli, the end result is quite mild. It has an aftertaste similar to that of dates, with the addition of selected spices, so even the teenager (a friend's son) who was helping with the garden said he preferred it to his usual fix of tomato ketchup. He is known to be a burger connoisseur, so that is praise indeed.

I was making some cheese muffins later in the day, when we had all finished the digging, so decided I would try some chutney in the mix. I stirred it through the dough just before cooking, and also added a good pinch of paprika. The muffins smelled good when they came out of the oven, and even better when they were cooling on a rack. The chutney taste was pleasant although not quite as strong as I had expected; next time I will double the amount I used. (For the record, I had used a tablespoon of chutney to 350g flour.)

We took some of these muffins with us on a walk next day and found they were moister than those I usually make. The chutney had made the mixture runnier, and that in turn had resulted in a softer texture. Normally I would serve them with a scrape of butter, but these were fine without. That probably means they are a healthier option as, even with the jaggery and sugar included in the chutney, the fat content is bound to be lower.

I took the last couple on a visit to my aunt (who lives in a retirement village). She thought they were pretty good muffins, almost as good as those she used to make herself, and I noticed that she managed to eat both of them. I asked her what she thought of the flavour. She thought a bit, and then said they just tasted like muffins! She had not noticed the extra flavour. That definitely means that I need to double the chutney next time.

Even though Cumin is an Indian spice cumin Gouda is an extremely tradition Dutch cheese. Early spice traders from India set out for Europe and the spices were quickly found to be used in the Cheeses. Not only was the flavour really good but it also added a nutritional value to a travel ready product.

Cumin Gouda is one of our more popular cheeses, winning numerous Gold medals at the NZ cheese awards and topping our sales charts this ... more...