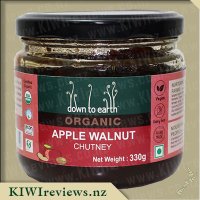 Our organic Apple Walnut Chutney is made from a blend of dry roasted spices with apple and chopped walnut. This apple chutney has a tangy, sweet flavour which is perfect with curries, meat, toast, sandwiches, crackers and bruschetta.

The flavour of vinegar is a big part of chutney's taste. Its sour sweetness is punctuated by the robust flavour of the spices. Walnut is a rich source of heart-healthy monounsaturated fatty acid and an excellent source of omega-3-fatty acid.

I am not usually a fan of chutney because I am a person that is not into strange, new textures but this Down to earth apple and walnut chutney was not too bad texture-wise. When I smelled the chutney I immediately thought of tarts or any fruit mince that is made in the festive season because of the very spicy smell of cinnamon and fruit reminding me of the insides of a Christmas tart or pie, which is great as Christmas is just around the corner. When first tasting this product I was very surprised because not only does it smell like Christmas it also tastes like Christmas. It has a very sweet taste yet not overwhelmingly sweet with hints of the spicy cinnamon singing through the tart fruitiness of the chutney mix so if you are a fan of cinnamon I would definitely recommend this for you.

Not only is made with natural ingredients that don't contain harmful chemicals it is also vegan-friendly which is great because it just so happens that my wife is vegan so that is another positive. My wife used it to top off her salad and thoroughly enjoyed it even though she isn't really into such sweet products. I opted to have it on cheese and crackers and the sweetness suited the savour flavour of the crackers very well. The packaging is nicely made with the small illustration of a walnut beside an apple, and the lid is very easy to open. Overall I can't really see any negatives apart from texture so I would definitely purchase this product in future and I do recommend it to people who are into bold flavours.

I don't really do chutneys, I haven't ever found one that I liked, but I'm always OK to try a new one, so I popped open this jar and took a whiff. My very first thought was that it smelled like the mix you get in Christmas fruit pies, tarts etc. and I don't like those at all, so I wasn't looking forward to trying this out and thought to myself "this is why I have kids, so they can try it first...". But seriously, they were happy to give it a try for me, they're used to this by now, but none of them liked it, promptly spitting it out and rinsing their mouths. My ten year old said it was worse than marmite... and she really hates marmite.

I gave this a try and found that it tasted far too similar to the Christmas fruit mince, for my liking, so tried to think of what I could use this for that wouldn't be too similar to them. My first try for this was to pair it with a couple of cheeses and whilst this helped a little bit with the flavour, I still couldn't stomach more than a couple of pieces. I knew that mixes like this work well with a roast, so I took it round to my in laws, so they could test it out with us, this worked ok with the meat but still not something I would go for, however, my I laws liked it, so I happily left it with them to finish off.

I have not really had much experience with chutneys, besides a million years ago when grandad would add his special chutney to his Roast Lamb sandwiches. I used to look forward to those lunches as I always felt so grown up and special. No one else in my family ate chutneys so it just became another memory locked away. But, since reviewing four of them this past fortnight I can not imagine life without them. Seriously, chutneys can be added to practically anything to give another level to something that could pretty much be rather bland.

My husband adores this combination where as I can really take it or leave it. Although, as the container which is an impressive 330g is basically down to the last possibly 50g I guess we will be purchasing again. The girls and husband have fallen for the sweet taste and we have found it does go along with a few items really well.

As we regularly have cheese and wackers my husband wipped this out to top his ones with it. I find it adds a kinda of cinnamon taste to the cheese and works well. For breakfast my husband cooked a fritter with some left over items in the fridge. I usually find his fritters rather bland so adding the chutney helped the doughy mess give it some taste. Putting it between two pieces of bread and buttering one side with butter and the other with the chutney worked fantastically especially as the butter started to melt and mixed with the chutney.

It was a given that it would work with pork. I haven't brought a roast in time before writing this so instead went to the deli and brought a couple of slices. As I was still rather full from the doughy mess I just rolled the chutney up with the pork and ate. Fantastic!!! Yes, highly recommend!! It works well and the combination is right on point although I knew it would be! Bring on the next Roast night!

As I have stated chutneys have definitely found a place in our hearts this past two weeks. We all have our favourites and they will now proudly find a place in our fridge. I prefer them over your basic tomato sauces and I am pretty sure they are good for you - even if they are not we will still end up buying. I am not sure on price points having never brought previously but regardless we will be sticking with this brand and our new favourite toppings. 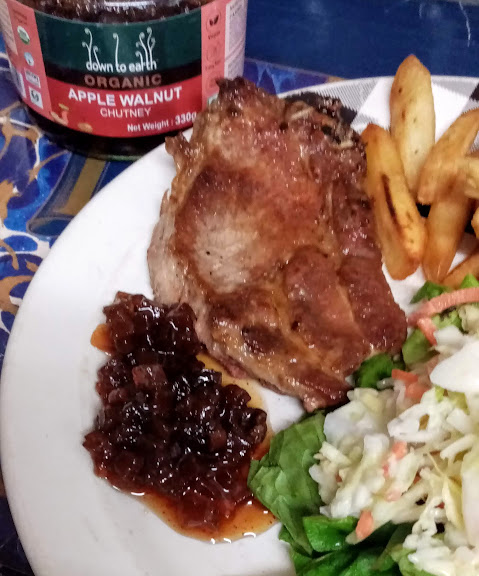 My first taste of this product took me completely by surprise. My reaction was that this was a jar of Christmas mince because that was the flavour combination it reminded me of. I double checked the label - and yes, it was certainly an apple and walnut chutney with lemon juice and selected spices. And I could see the little pieces of apple and walnut quite clearly in the mix. Clearly one of the spices - cinnamon? cumin? - had caused this impression.

So I set out to try it in a couple of meal combinations. My first was a simple meal of pork chops, chips and coleslaw with lettuce. We were both ready to see what it would taste like. My partner had not been allowed to taste the chutney on its own as I did not want any preconceptions. The result was amazing. When eaten with the pork, the taste was pure apple with a hint of spice. It was no more Christmassy than a conventional apple sauce. We tried it with the chips: this time it was more like a soft fruit chutney, sweet and full of flavour. Lastly, the coleslaw and yet another flavour emerged, one that would have more in common with a spiced vinaigrette. The conclusion? This chutney is a true chameleon, changing in flavour with each new food!

To prove my point, I tried some next day with a different meal. This time I was eating alone so decided to use up some frozen leftover slices of corned beef which had originally been cooked with carrots and onions. I defrosted the meat and reheated it, added some mashed potato and fresh spinach from my garden, and then spooned on some chutney. Once again, I tasted a little straight from the jar before adding it to my plate, and my reaction from the day before was still the same. Christmas mince! But as soon as it was combined with the food, the taste changed. The sweet apple flavour came out when I ate it with the corned beef. With the potato, it was more like a sweet sauce. And with the spinach, it was slightly more acid - something I had not really noticed before.

I can see this being a very useful item to keep on hand because it adapts so well to different foods. Being so versatile, it can be offered to visitors - and I will be interested to see what comments other people will have. I did one last experiment while I was actually writing this review - as a "fruit pate" on top of a couple of crackers and cheese - and at last I got to taste a hint of walnut!