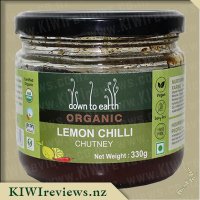 Sweet and spicy lemon chutney preserves the bright flavour of winter lemons for use all year long. Spoon it on roasted meats (it is especially tasty with leftover cold chicken) or serve with a mild cheese on crisp toast or crackers for an easy appetizer.

We are strong supporters of New Zealand made products and produce, but if you put in the title "Down to Earth" and "Organic" then we will look further into trying and supporting those products. The Down to Earth Organic Lemon Chilli Chutney is made in India and brought into New Zealand where it is packed for resale. New Zealand has high standards on food quality and will ensure products are living up to their claims so we were happy to see such a great product being brought in.

We are happy to add some spice to our meals, platters and sandwiches/wraps so this was going to be an exciting product to try as the blend of flavours with lemon and chilli almost seems counterproductive. The jar is a perfect little size and the price (at approx. $8.00 for 330g) reflects the quality of the product. This jar fits nicely in the pantry/fridge with others that are similar, easy to stack and see how much is left in them. So the initial scent of the chutney was more lemon than chili - which was refreshing. The texture is one that is easy to spread on bread, crackers or to be served with cheese or fruit - nice and it holds together well. The taste is a mix of wow that's a hit of spice, with a wow that's a bit sour with the lemon, so it may not suit those that like a straight hot or sour flavour. I liked the combination and found it was versatile.

I will use this on platters and add it to rice cakes for my work lunches as it kicks a little punch and is easy to transport. Served alongside a vegetable dish (salad or cooked vegetables), with rice, with bread, naan or roti, it is an easy accompaniment and will be enjoyed by ourselves and guests.

Thank you for the opportunity to try this, as it may be missed on the shelf, but once known will be sought after.

When I saw the Down to earth lemon and chilli chutney I really wanted to try it because it looked very different and exciting, I personally love fish and chicken which lemon and chilli goes great with those so I was really excited to try, stating it goes well with chicken was convenient because we eat chicken dishes a lot in our household, yet another great aspect of this product is its vegan which is great because my partner is vegan so this was perfect as she could also enjoy this lemon chilli chutney as well as everyone else.

The design of the jar itself is very well thought out and pleasing to look at with the green contrasts with the ivy green and other saturated colours. I personally enjoy art so the little images of the lemon and chillies were quite a nice little touch to add. The smell was a very sweet citrusy scent as well as a spicy tang that was a little less dominant in the mix of smells. The taste was a little disappointing as it is very sweet and I am not a fan of sweet things as I tend to go for savoury or sour sauces and it had a very strange flavour. It is very much lemon and chilli so it suits title well but it is lacking any real other flavours. I am afraid this is just not my kind of taste and I wouldn't purchase in the future as it was just too sweet and it wasn't appealing to me but I would still recommend it to people who like that kind of thing.

WE love lemon and chilli flavours in our house and love spicy food so this was great to try. I love the hit of lemon and the chilli hit and was excited to try it with different foods. We eat a lot of fish in the house as my partner loves to fish and go diving so I was looking forward to trying this chutney with some fresh crumbed fish and a side salad. It went so well with it and was so good. Everyone was happy with it. I love also having wraps for tea a quick and easy dinner. This flavour goes well in wraps with chicken.

My older 11 year old son really enjoyed the flavour and did not think it was to hot for him. He loves having sauce like all kids do so I had to tell him to not go crazy with it . As there is always more sauce then food. So this teaches him to have more food then sauce. My partner loved this flavour and has had most of the jar. He describes it as being really mean. He really enjoyed it. He had it in a home made burger and said it was so good. He enjoyed it with the fish more though.

I will be buying more of this and its great to have it in the fridge. A great chutney and love the texture. I noticed it greats how all the different chutneys have there own texture and by not having the same texture means to me they are individually mixed these chutneys up. Great product, but again wish for more details on the label on what to pair it with but apart from that nothing bad to say about the chutney. 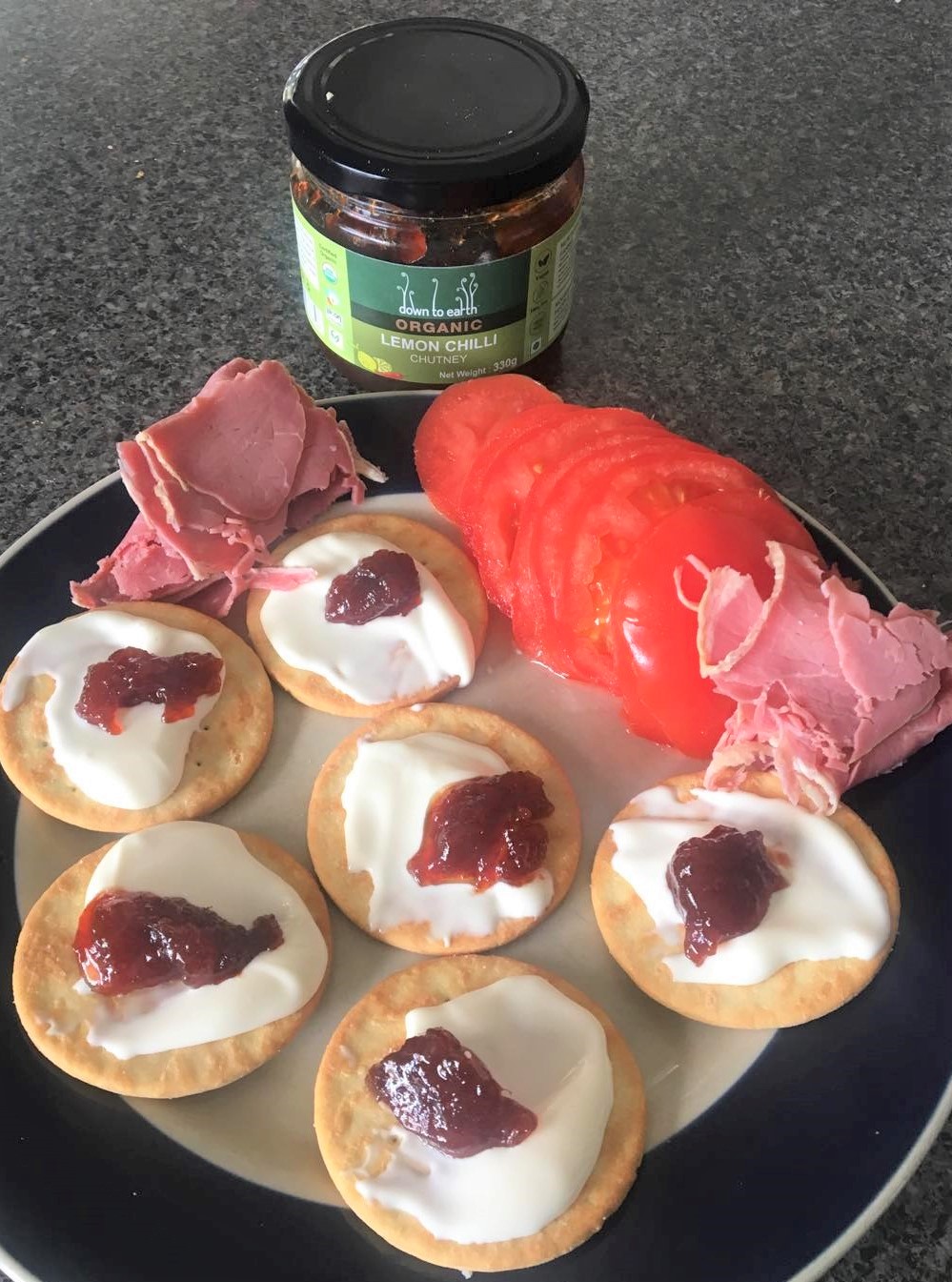 When we saw that this chutney was described as fiery, we were reluctant to let the children taste it until we had first tried it ourselves. The contents list included red chilli powder as 3% of the contents, and that was enough to generate an alert! The first impression, when we removed the lid and sniffed the chutney, was that there was plenty of cumin in the mixture. However, we need not have been too wary of finding this product too hot. The three of us agreed on tasting a little that the main flavour was lemon, and the spice, although noticeable, was reasonably mild. Neither the chilli nor the cumin was strong enough to be scary!

Once we had combined it with other foods, the heat was even less obvious. What did come to the fore, however, was a warm, flavoursome addition to many different dishes. We tried it first with a hunk of home-made bread, salmon pieces, and grape tomatoes. In case it proved to be hot we included a tub of soft cream cheese for backup! However, it was immediately clear that the chilli was much more muted served this way, so we offered some to Miss Seven. She said it was nice and requested another piece - so much for the adults-only impression! In effect, it reminded us strength-wise of a sweet chilli sauce: a cross between regular chutney and tabasco. And we all loved the full lemon flavour that went beautifully with the grape tomatoes.

Next we had it with a plate of hors d'oeuvres - crackers, firmer cream cheese, sliced tomatoes, and cold cuts (ham and corned beef). Again, it was well received, with even Mr Nine accepting a biscuit and assuring us that it was tasty. He reported that there was a slight grittiness to the texture, possibly from the spices after processing, but it did not deter him. It was good to see a normally fussy eater enjoying a grown-up product! Maybe he is getting older, or maybe it was just because he liked the combination of lemon with the other ingredients.

Since then we have tried it with hotdogs (in place of mustard) and fish-and-chips (in place of the usual fresh lemon wedge) and enjoyed it both times. It would be really nice with fish when we are travelling somewhere by car as fresh lemon is often hard to source on those occasions. But the best use of all was with a roadside sausage sizzle fundraiser. The sausages used on these stalls are often the cheapest and can be quite fatty. We had bought two apiece; it was quite late in the day and we had not eaten before venturing out to the shops. I had my review jar in the car, so we declined the offer of sauce and used our own chutney instead. A dab of lemon chilli on top instead of tomato sauce worked wonders with the flavour, giving the sausages a kick while reducing the effect of the fat. A new kiwi gourmet delight!

Sicilian Pesto is a great choice for your summery first or main course. It is a great variation of the Genovese Pesto. It has a peculiar delicate taste and a red warm colour, like the island that gives it his name.

This yummy pesto is 100% organic. It is a perfect sauce for pasta dishes and to enhance the flavour of meat dishes, and its rich of genuine ingredients like the Pachino cherry tomatoes, sun-dried tomatoes, basil and ... more...