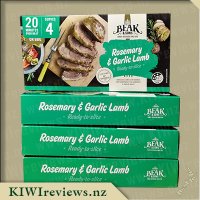 Succulent NZ lamb paired with aromatic rosemary: a match made in heaven. Slow cooked so it's succulent and juicy. Simply carve the lamb joint into chunky slices, heat and baste with the sauce and serve.

Lamb wasn't a neat that my dad cooked often and it's never been a meat I've been particularly interested in ordering or eating when visiting people, so getting a pack was a good opportunity to try it out after having none for several years. I can't say that I'm a fan of the colour scheme on the packaging but I felt the presentation of the food was very nice and it's always handy to be given an idea or two, right off the bat, in what to serve the food with. The back gives easy to follow instructions on how to cook this, either in the oven or on the BBQ.

I cooked this in the oven. Cutting the netting off the meat was messy as was then cutting the meat into slices, happily though the cold sauce was congealed and so it didn't run everywhere and get lost down the drain. Given that the meat was nice and easy to cut, I knew that this should at least be tender when it came out of the oven. I enjoyed the smells coming from the kitchen as this cooked but once I got it out I must say that I didn't find it too appealing in looks or smell. My girls thought this tasted absolutely delicious which worked out well as it meant none of the meat got wasted as I didn't enjoy it at all, for my personal preferences it was too fatty and oily.

When Beak & Sons had the ribs available to try I was mightily impressed with the quality of their product, so I was more than eager to try their other products out. The rosemary and garlic lamb was my first choice because it was the flavour that I was least familiar (as opposed to the beef brisket and pork belly), but to my surprise, this was actually my favourite of the three.

The packaging is very aesthetically pleasing and comes with a lovely matte cardboard box that makes them products very easy to stack. Inside the meat is in a vacuum sealed plastic pouch, so you don't have to worry about leaking, and it stays fresh that much longer. Checking out the heating instructions (the product is pre-cooked), the directions are very clear and don't include any option for the microwave. With only oven or BBQ directions, its a nice assurance of a high-quality standard to ensure the meat is cooked evenly, without drying out.

Slicing the pack open, I pushed out the meat and was rather surprised at the size. It looked rather small, though the nutritional information claimed to be nearly 900g of product. The meat took up maybe a quarter of the space in the cardboard box, so I don't know whether I just got a smaller piece, or if they all come to a similar size.

With the level of sauce in the pack, it does get a little bit messy taking the meat out of the pack, but at least you know the meat shouldn't be dry at all. The heating directions specified to slice the meat before heating, and while it was quite easy to slice up, it was already starting to crumble around the edges; even straight out of the fridge you can tell this meat is going to be incredibly tender. Throwing in an ovenproof dish, covering and heating for 20 minutes, it provided me enough time to prepare my potatoes and vegetables to go alongside the meat.

Removing the meat from the oven dish did prove to be a little difficult. Either a lot of care needs to be taken, or a long and wide instrument like a spatula should be used to prevent the meat from falling apart before it gets on the plate. The meat was so soft, I almost needed a spoon to get it out. I was immediately impressed with the aroma of the rosemary, and placing a piece of meat in my mouth, the fat melts on the tongue.

Rosemary is definitely the primary flavour, with the garlic proving to be more prevalent in the lingering aftertaste. The flavour profiles transition really well, and I found myself eating this product very slowly, savouring the flavour with each bite. Not a single ounce of toughness. Just tender, soft, and melt-in-your-mouth. With some mint sauce added, the flavour really popped, and I like that I get to control that aspect of the flavouring as it would be easy for the mint to overpower the dish if it was included in the sauce that the meat was marinating in. 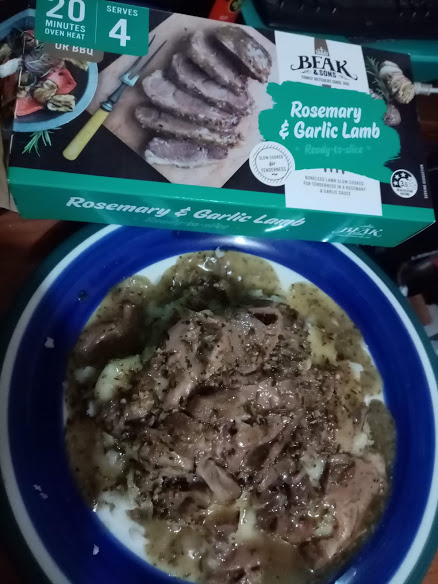 When I was a child. we often had lamb on a Tuesday night in winter. I don't know why it was always a Tuesday; sometimes traditions have gone on for so long that nobody remembers any more how they started. But when the lamb was stewed or braised, we always served it on top of bubble and squeak so that the potato and cabbage would soak up the juices - and if there was still some on the plate everyone was given a hunk of bread to mop up every last drop. So there was no negotiating here. We would review the product on a Tuesday, and the bubble and squeak would be prepared in advance!

It happened to be Tuesday night when a former work colleague was calling to help me with a building project, so I suggested she bring her son and his friend as well. That worked out nicely as the package is designed for four people. She assured me that the boys would both eat anything; they have just turned 12 and are permanently hungry. I organised fruit and ice-cream for dessert in case the boys wanted more to eat after we had finished; I was pretty sure they would not turn that down.

As I was dishing up the food, I tasted a little of the meat. I had tried it before heating it and had been disappointed as it was quite fatty and flavourless. But once it was warm, it took on a whole new range of flavours. Any fat that had been present had melted into the garlic sauce, and there was a mouth-watering aroma of rosemary. I could not smell the garlic, but the boys assured me it was there - just not quite as strong as I had expected.

Everyone was hungry so I let them finish first before asking for their impressions. Both boys were positive; they had finished every scrap on their plates, and were now attacking the remaining juices with a slice of bread apiece. I had explained about my family's tradition so of course they had to try it! My friend had enjoyed hers too - she thought it was great that it had been so quick to prepare, and said she would have thought I had cooked it myself had I not explained I was actually writing a review. I liked it as well, although I still would have preferred a stronger garlic flavour.

When the boys had finished, I told them to help themselves to the fruit and ice-cream. They needed no second invitation! My friend and I decided to give dessert a miss; the meal had been quite filling and both of us were content to finish with a coffee apiece. As they were leaving later that evening, my friend asked if she could take the empty packet so she could look out for it when supermarket shopping. She said she had enjoyed it so much she would like to cook it for her husband to see if he spotted that she had not cooked it herself from scratch.