Home > Categories > Movies > Drama > On The Basis Of Sex review

ProdID: 8314 - On The Basis Of Sex
Directed by Mimi Leder 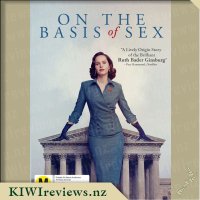 On The Basis Of Sex product reviews

All rise for the fight of the century!

Inspired by the powerful true story of Ruth Bader Ginsburg (Felicity Jones), On The Basis Of Sex depicts a struggling young attorney and new mother facing adversity in her fight for equal rights. When Ruth takes on a ground-breaking case, she knows the outcome could alter the courts' view of gender discrimination. Ruth teams up with her husband Martin Ginsburg (Armie Hammer) to fight the case that catapults her into becoming one of the most important public figures of our time.

Having already seen the documentary RBG, I was fascinated to see what sort of take director Mimi Leder would have on translating the early life of a still-living personality into a movie drama, and what sort of liberties might be taken with her life story in the pursuit of art. There is a huge difference between a rigidly true-to-life portrayal and a story which allows some poetic licence to better entice the viewer. To a large extent this version works as a way of introducing Ruth Bader Ginsburg to a younger generation who may not have heard of her, and therefore a few lapses in reality can be forgiven in the process.

The main protagonists (Felicity Jones as Ruth Bader Ginsburg and Armie Hammer as Marty Ginsburg) are believable, if a little too physically perfect - the real Ginsburgs were much less conventionally handsome; however, it is the prerogative of Hollywood to present attractive actors in key roles as a draw card to the viewers. What does come across strongly in the screenplay is the strong bond between the two right from the start of their relationship. It is made very clear that their love survives Marty's early illness, continuing right through their lives and individual careers. The movie also emphasises Ruth's quiet strength, underlining this early on when she challenges another student as he answers a question incorrectly - thus establishing herself not only as a highly intelligent and well-prepared lawyer-in-the-making, but also as a woman who is going to challenge the status quo.

There were times when the movie was not as fast paced as it could have been; although the plot centred primarily around Bader Ginsburg's first successful human rights case, and as a consequence included a large amount of dialogue, there was still scope for more physical interaction. The characters were a little too genteel for me; although the director may have been intending to emphasise the basic soft approach that Bader Ginsburg was developing in order to catch her opposition unawares, I think this could still have been conveyed in a greater variety of ways. The actors were adequate, but there were no great performances that stood out. Even the wonderful Kathy Bates (Dorothy Kenyon) was not used to full effect; I was initially impressed to see that she was one of the cast, but even her inclusion did not serve to spice things up. In fact, I believe a good twenty minutes could have been pared from the movie without significantly affecting the outcome.

One device I did find effective was the metamorphosis of the actor Felicity Jones into the real-life Bader Ginsburg, right at the end of the movie. Metamorphosis is possibly the wrong word as there was no physical transformation from one to the other; the sequence was carried out through the judicious placement of pillars so that there was no need for special effects. However. the implication of this device is that Bader Ginsburg had offered her personal approval of the way she has been presented in the film.

I also appreciated the inclusion of such painstaking detail to reflect the passage of 20 years between the early 1950s and the early 1970s. The 1950s are presented as a time when women knew their place, and "human rights" were based on tradition rather than reason. Over the time period covered by the movie, historical development is defined by subtle changes in clothing, house decor, car models - even the number of people smoking in public is seen to decrease. There were some interesting background shots such as that highlighting Cosmopolitan magazine, where a hoarding on the facade of a building was used to reflect the changing status of women (as the female was depicted in a dominant position while the male rested his head on her knee).

For someone who previously knew nothing of Bader Ginsburg's life and contribution to equal rights for men and women (meaning that discrimination could no longer be tolerated "on the basis of sex"), this film provides a useful introduction to her accomplishments. It is meant for the average viewer, not the budding lawyer or politician or human rights activist. Despite the somewhat slow-moving plot and the odd missed cinematic opportunities, it does offer a basic overview of the early career of one of the most influential women of our time.

Score: 8.0
Product reviews for listing 5093: You're Next
Directed by Adam Wingard

You're Next is a 2011 American horror film directed and edited by Adam Wingard on DVD.

One of the most terrifying films in years, You're Next puts a fresh twist on home-invasion horror. When a gang of masked, axe-wielding murderers descend upon the Davison family reunion, the hapless victims seem trapped...until a mysterious guest of the family (Sharni Vinson) proves to be the most talented killer of all.