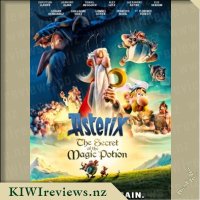 Disclosure StatementFULL DISCLOSURE: A number of units of this product have, at some time, been supplied to KIWIreviews by the company for the purposes of unbiased, independent reviews. No fee was accepted by KIWIreviews or the reviewers themselves - these are genuine, unpaid consumer reviews.
Available:
In cinemas 30 May 2019

Asterix: The Secret of the Magic Potion product reviews

On the 60th anniversary of the much-adored comic book series, Asterix and Obelix embark on a quest across Gaul with their village druid, Getafix, looking for a young druid worthy of learning the secret of the magic potion - a formula which has long helped to keep the Gaulish village safe against Julius Cesar and his invading army. However, once Asterix and Obelix begin their quest, all hell breaks loose at home as the Romans start attacking the village, and an evil wizard named Demonix does everything he can to steal the potion's secret recipe.

What can I say? I loved this movie, I can remember the animated cartoons from my youth, the colours were inconsistent and faded and looked like it had been stored wrong but this time the animation was fantastic, great details of hair and faces and so life like. There was some really funny moments, there was heaps of laughter. Music was great, I was singing along in my mind.

Some parts of the movie were obvious, all of Gaul was interested in obtaining the secret recipe and the word got out so the Romans showed an interest too. I really liked how the Romans tested if the store of potion had run out. The good guys were easy to spot and the bad guys were interesting but easy to spot, some of the plots they used were a bit of a surprise. There were some twists that were a bit unexpected, but overall it was a great storyline. I'm not sure if I have a favourite character but there were a few that had me laughing, the old favourites Asterix who is the voice of reason and the protector and Obelix (the big guy) whose biggest desire is to taste the secret potion but who obviously doesn't need it and the children who played games that told the story of the adults in very imaginative ways.

My kids have never watched Asterix but they still recognised the characters and I heard some laughter from them as well, we got out the movie and they asked if I could buy it on DVD and since my mum is a huge fan she wants to go and see it next week when it is available to the general public they have asked if we can go with her. We have already booked tickets to see this with my mum.