Home > Categories > Books > Non-Fiction > Everything In Its Place review

ProdID: 8292 - Everything In Its Place
Written by Oliver Sacks 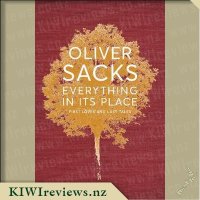 Everything In Its Place product reviews

Oliver Sacks was born in 1933 in London and died in 2015. He spent almost fifty years working as a neurologist and was also the author of many books about the strange neurological predicaments and conditions of his patients. The New York Times referred to him as the "poet laureate of medicine".

Everything In Its Place is a celebration of Sacks' myriad interests, many of which are highlighted in this, his final volume of essays and short articles. These are recounted with his characteristic compassion and erudition, and in his luminous prose. Topics range from swimming, ferns and horsetails to his final case histories exploring schizophrenia, dementia and Alzheimer's.

The Book of New Zealand Records and Firsts
Rating: 8.9

Can You See What I See?  Big Book Of Search-and-Find Fun
Rating: 9.8

I think this is one of the most interesting books I have ever read. I had barely heard of Oliver Sacks before I started reading it, but before I was ten pages in, I was hooked. Not only is the subject matter fascinating, but his writing style bears no resemblance to that used in a textbook. He has a wonderful way with words; what I really responded to was the way he does not dumb down his descriptions. Instead, he words them in such a way as to make the meanings of obscure words easy to deduce in context. There was one word I did not know (and could not guess) - deafferenting - so I had to stop and look it up! I now want to read everything else that Sacks has ever written. Indeed, it is difficult when reading this book to regard him as anything but a writer. But he was so much more: physician, naturalist, swimmer, mountaineer, scientist, university professor, psychiatrist, and neurologist.

The content of the book is divided into three sets of essays, each with a different focus. The first section deals with Sacks' personal history and observations of others, and bears the title "First Loves". Possibly the fact that the very first essay was entitled "Water Babies" and dealt with his love of swimming was what instantly drew me in because I was the same as a child - any body of water had to be swum in (or splashed in if it was too shallow), and Sacks, like me, took his cue from a father who was also a dedicated waterbaby. The Humphrey Davy essay, in the same section, is longer than the other essays: it is a potted and very informative account of a genius and his scientific discoveries. I had no idea, until I read this account, just how much Davy contributed to modern science.

The second section of the book, "Clinical Tales", is devoted to specific case studies. It is compelling to read about the different medical conditions endured by some of his unfortunate patients. In several there is an element of humour, as in the description of the meeting of two Tourette syndrome sufferers, Lowell and David. Sacks describes them as displaying "the excitement of two dogs meeting", yet the context, although humorous, is not unkind. Sacks' attitude towards his various patients is benign; his aim is to learn about their conditions and then share in the hope of finding new treatments. Ridiculing them or sensationalising their issues have no place in his research.

The final section, "Life Continues", returns to more personal observations of the physical world about him. Again, I was amazed at the wide range of subjects that interest him, and which he is able to reproduce in such scintillating prose that his enthusiasm becomes contagious. I certainly found myself exploring a myriad of different topics, some of which I would never have considered investigating. It is said that a teacher who is passionate about his topic, no matter what it may be, can capture the attention of the most unlikely student simply through a charismatic approach. The essays in this section encompass physical movement, clupeophilia (the cult of herring worship!), the therapeutic effects of having a garden, defining new elements, and several others: all seemingly unrelated, but all given the unique Sacks delivery.

To sum up - I could not put the book down once I had started it. I fell asleep a couple of times in mid essay only to resume where I had left off as soon as I opened my eyes again. It is quite simply an amazing journey through Sacks' thoughts and discoveries; the reader is swept along with his observations, barely stopping to catch breath for fear of being left behind. Not only did I learn many new ideas, I thoroughly enjoyed the experience. Would that all teachers taught like this - stimulating the young mind by bombarding it with amazing stories.

Score: 7.4
Product reviews for listing 3748: You Are Not Here
Written by Samantha Schutz

Annaleah and Brian shared something special - Annaleah is sure of it. When they were together, they didn't need anyone else. It didn't matter that their relationship was secret. All that mattered was what they had with each other.

And then, out of nowhere, Brian dies. And while everyone else has their role in the grieving process, Annaleah finds herself living outside of it, unacknowledged and lonely. How can you recover from a loss that no one will let you have?