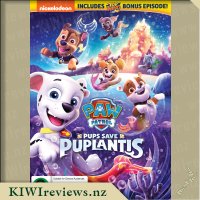 When the Mer pups' magical city of Puplantis begins to collapse, it's up to the Sea Patrol to find out why before it's too late.

Then, see how the pups stop Sid the Pirate and his first mate Arrby from stealing the Sea Patroller, and save a giant sea slug's home!

In this household I have 3 children who have been huge Paw Patrol fans right since the show was first released. When I saw that there was a copy of Paw Patrol : Pups Save Puplantis available to request, I quickly jumped at the opportunity to add this to our growing Paw Patrol DVD collection. Judging by the cover I also thought that my daughter would be intrigued by the merpups, I was stoked to see we were lucky enough to receive a copy to watch and review.

The DVD cover shows the 6 main Paw Patrol pups swimming underwater as merpups with the beautiful looking Puplantis in the background. The cover states that included on the disc is a bonus Top Wing episode, a show that we had never heard of but sounded exciting. On the reverse cover it states there are 6 epic underwater missions, 2 episodes are double-length, the approximate running time is 91 minutes. The episode title that got the kids buzzing was "Pups Save Their Pirated Sea Patroller."

"Pups Save Puplantis" was the first episode on the disc, my children were absolutely mesmerized to see all of the pups turn into merpups.The storyline of this episode was very exciting and had the kids cheering at various points, especially when the vehicles were launched into the water from the Sea Patroller. My youngest said his favourite part was seeing the pups fix the castle.
The next few episodes proved to be just as exciting as the first, with rescuing the dive squad and helping Captain Sid. We found it exciting to see all the different things that the Sub Patroller could do while under the water, and the arguments between the Turbot cousins had all 3 children giggling in fits of laughter.
The episode the children were most excited for did not disappoint, right from the start they were on the edge of their seats hoping the Sea Patroller would be safe.

The Top Wing episode included some very cute creatures, and of course adventures were to be had. The children were excited to see if anyone could find the treasure, and hoped the pirates wouldn't find it first. I think this would be a perfect series for toddler aged children, as it had a simple storyline and vibrant characters, we hope to see more episodes in the future.

This DVD was perfect for my 5 year old and 3 year old, they watched from start to finish, however my 7 year old got bored after a few episodes. Paw Patrol is a wonderful series that shows teamwork and problem solving, I highly recommend this and can't wait to see what the Paw Patrol crew will get up to next.

Score: 10.0
Product reviews for listing 7761: Blaze and The Monster Machines: Race in to Velocityville -  Type of Show: Animated Series

Blaze And The Monster Machines: Race Into Velocityville

Collection of animated adventures featuring monster truck Blaze (voice of Nolan North) and his eight-year-old driver AJ (Dusan Brown) as they take on a series of problems using science and maths. In these episodes the duo enter a race to the top of Eagle Rock, while also setting ... more...