How to Train Your Dragon : The Hidden World review 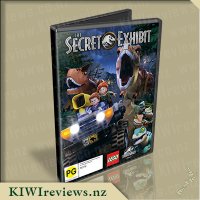 With the grand opening of Jurassic World's new super-secret dinosaur exhibit just days away, only one thing is missing - the dinosaurs!!

In order to get the job done, Simon Masrani enlists his newly-hired assistant, Claire Dearing, to ensure the new attraction opens on time, or else.

Unfortunately, Owen Grady, the animal behaviorist Claire hired to deliver the dinosaurs, is late. From a runaway Gyrosphere, hang gliding with a Pteranodon, to a high-speed game of chicken with a T-Rex, Owen's mission turns out to be far more difficult than anyone could have imagined.

It's the very beginning of Claire and Owen's epic adventure, in LEGO Jurassic World: The Secret Exhibit.

Although I could sum this review up in one word, according to my 7 year old, (It is the word AWESOME by the way!! ) but, as a parent and a reviewer, I much prefer a little more information!! So, here is the review for The Secret Exhibit, paraphrased a little from my children!

My three children (and my husband if I am completely honest ! ) were all super excited to watch this DVD, especially as, at the time of receiving this, they were all eagerly awaiting the release of the LEGO 2 Movie! My son is dinosaur mad and LEGO mad, so what better DVD than this to review!!

As you would expect from a Jurassic World movie it is pretty action packed, and fits in before the other LEGO movies. That being said, we have not seen the others, but this one still made sense and is good as a stand alone!! The movie begins with one of the main characters, Claire, an assistant director of the dinosaur park, trying to organise a new exhibit but things are going wrong. When they do arrive, there is a mad dash to get the dinosaurs to where they need to be, and we meet another main character, Owen, who is a like a vet for dinosaurs! .
" The movie is pretty fast paced and has lots of funny bits in it' " said Miss 10, and she said " it is really funny, not just funny haha "- a high compliment from her !! Miss 10 (who would like to be an illustrator or movie maker) said that they made the movie really well - and the dinosaurs were sometimes a bit scary, but mostly pretty cool!

From a parent point of view, even though it is LEGO, there are a few scary-ish scenes in it to be aware of - a storm to navigate in a helicopter, crashing and rolling a car and flying off a cliff - but I just kept reminding my kids that it was not real - just a movie, and like their LEGO, we could rebuild!!

There were a few little let downs in the movie, that pedantic LEGO lovers might notice, but all in all a fun movie, great theme and main characters and well worth watching again!

John Whittaker, a young English man, falls in love with and marries a sexy and glamorous American woman, Larita. However, when the couple arrive at the family home, his mother Veronica has an instant allergic reaction to her new daughter-inlaw.
Larita tries her best to fit in, but fails to tiptoe through the minefield laid by her mother-in-law. Larita quickly realises Veronica's game and sees that she must fight back if she's ... more...