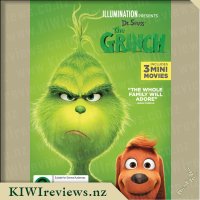 Disclosure StatementFULL DISCLOSURE: A number of units of this product have, at some time, been supplied to KIWIreviews by the company for the purposes of unbiased, independent reviews. No fee was accepted by KIWIreviews or the reviewers themselves - these are genuine, unpaid consumer reviews.
Available:
March 27th 2019

The Grinch tells the story of a cynical grump who goes on a mission to steal Christmas, only to have his heart changed by a young girl's generous holiday spirit. Funny, heartwarming and visually stunning, it's a universal story about the spirit of Christmas and the indomitable power of optimism.

I've read the book and my kids and I have enjoyed Jim Carreys and the version of The Grinch that he brought to life, so when we saw this we knew we had to give it a try. This film follows the same basic plot as all versions previously but this time Cindy-Lou wants to catch Santa and ask him to help out her mum who is a solo parent to her and her twin brothers. I didn't find there were lots of moments that I enjoyed, though I loved the scene with Grinch and carollers and there were a few sweet scenes between Grinch and Max. This Grinch is a much gentler soul, he visits whoville a lot, so there's no fear or animosity there, but he still hates Christmas, more due to loneliness than anything really horrible.

The plot moves at a slow but steady pace, so much so that even the scenes of Grinch stealing Christmas didn't really feel like anything big or stir any particularly strong emotions from me. Because Grinch isn't a mean, miserable character, I didn't find his change of heart to be anything big or as effective as it could have been, that being said, I did love that he treats Max like a loving owner, he worries about him and cares about Max, which was really sweet and gives us a few lovely moments. Ultimately, there wasn't any character that really stood out for me or had me cheering them on. The soundtrack fit in well, but beyond the carollers song, there wasn't any that I really enjoyed and thus none that I've listened to on repeat since.

In the special features there are three mini movies, one featuring Max and a sick Grinch and two featuring the worlds favourite banana loving oddballs, the minions, one which fits in Despicable Me 3 and one fits the Christmas theme. The Max mini movie was sweet and lovely whilst the minion mini movies aimed at making you laugh and whilst they weren't anything amazing, they had the kids laughing, which was the main thing. There is also a 'making of' clip which I didn't think was that necessary. There are plenty of special features which includes but isn't limited to two lyric videos, behind the scenes for the music, Christmas around the world and much more. It's a good range of things to watch beyond the film itself, perfect for people who like to watch all the special features, as my kids do.

This is a lovely, sweet movie. It's not one that requires I pay it any attention to know what's just gone on, but the kids really liked it and enjoy it more than the live action adaptation. Looking forward to adding it to our Christmas DVDs to watch in December.

From the Academy Award ® winning producer of Shrek and starring Owen Wilson (The Internship), Woody Harrelson (The Hunger Games: Catching Fire) and Amy Poehler (They Came Together), this adventurous buddy comedy for audiences of all ages sees two turkeys from opposite sides of the tracks put aside their differences to travel back in time to change the course of history - and get turkey off the Thanksgiving menu for good.