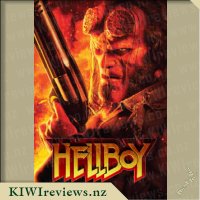 Disclosure StatementFULL DISCLOSURE: A number of units of this product have, at some time, been supplied to KIWIreviews by the company for the purposes of unbiased, independent reviews. No fee was accepted by KIWIreviews or the reviewers themselves - these are genuine, unpaid consumer reviews.
Available:
in cinemas 11th April 2019

Based on the graphic novels by Mike Mignola, Hellboy, caught between the worlds of the supernatural and human, battles an ancient sorceress bent on revenge. 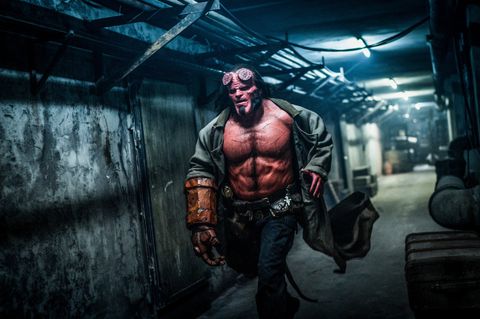 I'm sorry but I'm going to come straight out of the gates and say, what an absolute disappointment this was. Having recently rewatched the Ron Perlman/Guillermo del Toro's iteration, I thought I knew what I was in for. Boy, was I wrong.

It wasn't all bad though. From a costuming and visual standpoint, David Harbour's iteration of Anung Un Rama (a.k.a Hellboy) looks great. It's like he lost all of the puppy fat from Perlman's version and buffed himself up to the extreme, ending up with a longer, larger face (accentuated by very small eyes hidden under a very prominent brow), and some impressive looking musculature. A grittier shade of red, it matches the overall personality of Harbour's Hellboy, which is much more downtrodden, bitter, and surprisingly, not all that likeable.

With an R-rating, they try to take advantage of that with gratuitous gore, creative deaths of character (with excessive amounts of CGI blood), and as many expletives as they can fit into the dialogue, even fitting Milla Jovovich into a top that is so open that a gust of wind will have her nipples out for the world to see. It adds to the fun of the film but doesn't add much to the content of the film with no emotional connections to any of the characters.

The film does try to stand on its own feet providing its own version of Hellboy's origin story (unfortunately we only get a quick peek at Kroenen) and reusing one of the main themes from Hellboy II: The Golden Army. I wish I could say that a similar plot was the only downfall of the movie, but there is oh so much more.

If you have read my reviews from the previous two Hellboy movies you will know that I believe practical effects are superior (because visually they are more realistic) and they were the main aspect that has made those films stand the test of time. Hellboy (2019) has gone ahead and put in as much CGI as possible, and a day before it's official release it already looks dated. From the abilities and looks of his team to 90% of the villains and enemies in the film, so much CGI has been used and combine that with excessive use of shaky cam and a very in-your-face soundtrack, you get unwatchable and deafening action scenes.

I loved the Resident Evil movie franchise. It quickly became very corny, but I thought Milla Jovovich did a convincing job in her role as Alice. In this film, however, her role as the Blood Queen Nimue is far less convincing. There was no sense of threat or power with her character. With some pretty generic dialogue and an unconvincing execution, Jovovich looks like she has phoned in her performance, and gives the movie a cheesiness right from the opening scene.

You can't really blame Jovovich though, because the writing was very poor. An incredibly convoluted plot, that makes less and less sense the more you think about it. Some people in the cinema were asking whether there had been a previous movie that they had missed that might explain some of what was going on, but the reality is that the film's own plot contradicts itself. It builds towards a climax that again has provided no real sense of threat, no sense of scale or limitations, and yet the writers still seem to have written themselves into a corner, making up abilities and plot devices to find resolution in a story that makes very little sense.

I had high hopes for a more mature Hellboy film seeing as this was R-rated. But we got a mish-mash of the 2004 and 2008 films with less likeable characters, a convoluted mess of a plot, minimal practical effects and a lot of unnecessary cursing.

In the year 3028 the Drej, a vicious alien race, has destroyed Earth. Fifteen years later a young man named Cale learns he possesses a genetically encoded map to the Titan, a spaceship that holds the secret to the salvation of the human race.

With the Drej in hot pursuit, Cale blasts off with the new crew of the Valkyrie in an attempt to find the Titan before the Drej destroy it, and with it mankind's last chance for a home of their ... more...