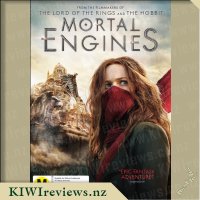 Mortal Engines is a startling new adventure unlike any you've seen before. Hundreds of years after our civilisation was destroyed, a new world has emerged. A mysterious young woman named Hester Shaw leads a band of outcasts in the fight to stop London - now a giant predator city on wheels - from devouring everything in its path.

Included on the DVD is a bonus feature section which includes a behind-the-scenes look at the ambitious undertaking of putting an entire city on wheels.

The script was written by Fran Walsh, Philippa Boyens, and Peter Jackson, based on the novel by Philip Reeve. Special effects are by Weta Digital.

I am still trying to decide what I thought of this movie. It had everything going for it - three scriptwriters with a long list of successes to their names, and the technology of Weta Digital adding to its credibility. As this was Christian Rivers' first experience directing a movie, the assumption was that he would bring his expertise in storyboarding and special effects into play and the result would be a ground-breaking success. I watched the movie twice, once with a group of friends, and once on my own. Between the two screenings I looked at the extra material included with the DVD, and I found that incredibly helpful in unpacking the film. The second time round I had a much better grasp on what was happening.

From the start, there were some anomalies. The most obvious one was the censorship rating. The DVD slip cover displayed an M rating - suitable for mature audiences 16 and over - and also added the caveat that it included science fiction themes and violence. At the same time, this movie is based on the first volume of a young adult series aimed at teenagers. Having watched the movie, none of us could see why some of the more gruesome scenes needed to be censored. It seemed that this was a movie made for young people, albeit with strong stomachs! Miss 14 and Mr 15 both watched it with us although we did not let the younger girls see it in case it frightened them. Neither of our teenage viewers were fazed by the content; rather, they were confused for part of the time!

On the first viewing, we found it difficult to get into the storyline. None of us was familiar with the back story and the series of novels that had inspired it, so we thought it was a case of too much too quickly. Some of the steampunk constructions were amazing but there was so much visual detail that it was hard to take it all in, and that meant we missed some of the clues. There were several stories interwoven into the plot, and the audience kept being jerked from one to another; the continuity did not work. We were constantly assailed by new scenes - and some featured very dim lighting, so it was hard to make out exactly what we were looking at. We were lucky enough to have access to a huge screen, but anyone trying to watch it on a laptop would have difficulty working out what they were supposed to be seeing.

Everyone went out after the film had finished, so I took a break before settling down to watch it again; in the meantime, I took the opportunity to look at the bonus features. The first, End of the Ancients, resolved almost all the issues we had with getting into the film. It served as an introduction to what had happened prior to the movie. What a pity it was not included as the opening sequence instead of being added as an extra. It was quite short, but to the point, and I immediately understood what the movie was about. I think the director had tried to start off the film in an artistic and dramatic way to draw in the audience, but it had the opposite effect - it moved too fast and the sequences were too complicated.

The other bonus features were equally fascinating, adding depth and interest to what had gone on in the movie. I loved the Minions being featured as objects of worship - again this had not been fully clear in the movie itself because the sequence was so rushed, but once they had been unpacked it all made perfect sense. The mantra "Movement is Life" is also stressed throughout the bonus features, giving meaning to the idea of the predatory Traction Cities. One can imagine a group of tribes all living in voracious steampunk campervans and chasing one other through a blasted landscape!

One interesting theme that comes out strongly and underpins the action is that of class. New London, the biggest of the traction cities, is built in tiers from the workers and muck at the bottom to the ruling class in their penthouse and immaculately landscaped supercity. Captives entered through the lowest tier and were escorted to their fate (which was never made quite clear although it involved slave auctions and pressganging activities). New London's face includes familiar items - phone boxes, statues, pubs, underground stations, and other details which evoke the twentieth and twenty-first century metropolis. Alongside the familiar are weird and wonderful collections of discarded tools and manufactured items - now artefacts to be treasured and stored in the museum. 1700 years into a dystopian future, DVDs are treasured for what they preserve of a world long gone.

The dome of St Paul's Cathedral is the highest point in New London. No longer a religious building, it is now the place from which destruction emanates. Even so, it is still recognisable as the familiar St Paul's even though the roof now folds back like gigantic petals. The small floating towns of Airhaven (where the Anti Traction League hangs out) hover above, dwarfed by the sheer bulk of New London.

An important theme is that of global warming and world unrest. The devastation happened because people were greedy for power, and within sixty minutes the world we know had ceased to exist. It is hard not to make parallels with modern power struggles and what could go wrong if some idiot were to press the wrong button. The current movement worldwide is to reduce carbon emissions and restore the natural balance; the movie makes it clear that, once those resources are gone, humans are once again living in a post-apocalyptic "stone age" of their own making where fuel is generated from recycled materials extracted from captured cities; even this is a finite source. This is the meaning of the title Mortal Engines (a quote from Shakespeare's Othello) because sooner or later the fuel is going to run out and traction will be no more. The evil black smoke that billows from chimneys on the traction cities is a far cry from renewable power sources like wind generators and water turbines.

Even the assimilation of refugees from captured cities has unpleasant ramifications for those who have survived concentration camps and prisons. Those arriving have to surrender all personal possessions and are warned that children may be temporarily separated from their parents. This is quite eerie since it is never sure where those people are going to end up. There is more than an element of xenophobia in the assimilation of these new arrivals.

When I watched the movie for the second time (alone) I found I enjoyed it much more. Thanks to the bonus feature, I now understood the back story and that made a huge difference. I think the fault with the movie was that it tried to do too much - the visual effects were superb, but the story was too fragmented and too fast moving. There was little space for character development - minor characters appeared and disappeared; probably the best and most memorable performances were those by Hugo Weaving (Thaddeus Valentine) and Jihae (Anna Fang). There were some stunning moments of choreography when Anna Fang was using her martial arts prowess to fend off multiple attackers, and Thaddeus Valentine was a most convincing evil leader. But the film did not allow for the other characters to develop fully. Possibly, if there is a sequel, it will go at a slower pace and allow the characters to come into their own.

During a fierce thunderstorm in rural Kentucky, a young zebra is accidentally left behind by a travelling circus. He is found by a former champion horse trainer, Noal Walsh and 'Stripes' is quickly adopted as a favourite pet by his daughter, Channing. Now 'Stripes' may not look like the other horses galloping across the fields, but he thinks he is no different and longs to race with all the thoroughbreds. So does Channing and, with some ... more...