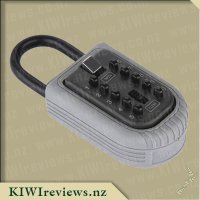 Disclosure StatementFULL DISCLOSURE: A number of units of this product have, at some time, been supplied to KIWIreviews by the company for the purposes of unbiased, independent reviews. No fee was accepted by KIWIreviews or the reviewers themselves - these are genuine, unpaid consumer reviews.
Available:
via online store

This hangable outdoor key lockbox is made from dutable metal with a rubberised noise-reducing cover and has a user-settable combination anywhere from 3 to 10-digits. It can hold your spare house, garage and car keys securely, and is simple to operate.

Features:
•  Portable and secure to use
•  10-digit combination lock to ensure security.
•  Stores up to 4 keys for house, car or padlock
•  Strong zinc alloy body resists hammering and sawing. 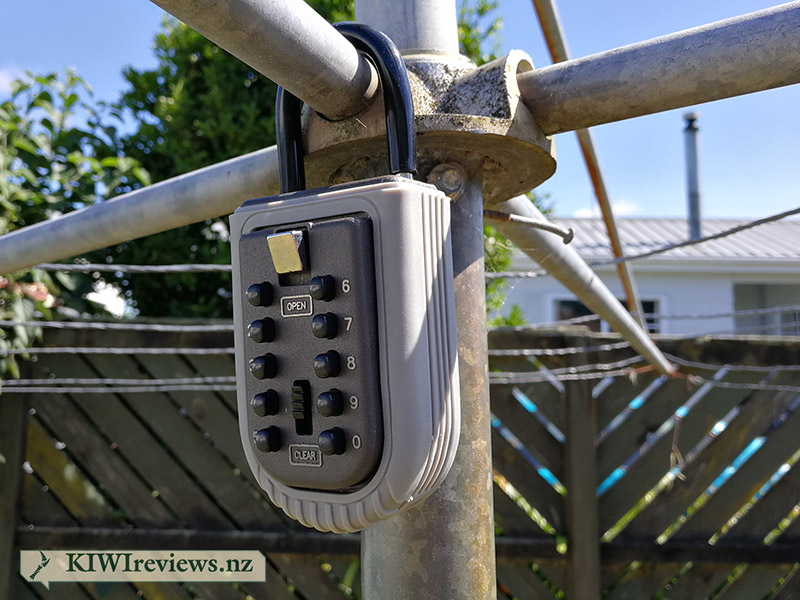 So, I hate hiding spare keys where they are accessible, even if they are fairly well hidden. There's always that little worry that someone may see me collecting or returning it, and while I am away they will use the key to empty my house. In situations like that, insurance won't pay out so it would be a total hassle. This concern has spilt over to key safes too - I just don't trust most of the ones I have seen on the market and really don't want to spend $100 to find I still lose all my gear. For less than $30, and no *need* to hide an actual key in this in order to test its effectiveness, this seemed like a great time to explore the idea a bit more.

The first thing I noted about this was that it was effectively a giant padlock in its own right. Disregarding using it to hide keys, it strikes me as a great padlock for cyclists. Using a sturdy cable with loops in the ends - they are readily available at most bike and hardware stores - and this key safe, a rider can secure their bike easily AND key the house key on-hand but secure too. I have lost count of the number of times my house keys fell out of my pockets while riding during my uni days, which is why this seems like someone needs to jump in a "phonebox" or DeLorean and jump it back a couple of decades!

Bringing it back to the present, I decided to see what sort of places I could stash this where it would be accessible but not obvious. The sturdy steel "padlock" design means that it needs to be looped through something equally sturdy and fixed - no point attaching it to a tree branch that can be broken off, or a downpipe bracket which can be easily smashed. The property I'm living in at the moment doesn't have a lot of options for me, so I opted for the clothesline.

The safe attached easily, and very securely. It was at a good height for an adult to operate but out of reach of the neighbourhood troublemakers, who are mostly pre-teens who are bored and badly supervised, if at all. I have had to chase a few of them off my back patio as they explore ways to get into my house. Instead of a key (just in case) I stashed a note saying "Nice Try, but my security camera has seen you now, and Alexa has already called the cops. Run." Though this threat has not yet been needed, putting a note in there DID alert me to a slightly disappointing design issue - this may be corrosion-resistant, but it is NOT weatherproof.

Upon checking it about 4 days after putting it out, I noticed quite a bit of water inside the storage cavity. The water leaks in where the ends of the mounting-hook enter the main case - the protective plastic sleeve that covers the loop does not extend down quite far enough to cover over the holes, leaving enough room for water to get in easily during rain. A slight thing, but if your keys could suffer from being wet, you may need to move this to a new location. At least that's a relatively easy task, as long as you have, or can make, somewhere else to put it.

Setting the new combination was a breeze, once I figured out that "the plastic screw" meant the stubs of each button I set as the new combination. Once I had realised that, I also realised that I didn't actually need to press the buttons to set the new combination at all, just use the supplied (Yes, included!) screwdriver to just flip the locking nobs for the right buttons. You DO need to remove the back plate though, as it won't allow you to turn the nobs while it is attached - a great way to prevent the combination accidentally changing.

One of the little quirks I noted is that once you have punched in your combination and pulled down the release button to remove the front panel, the lock resets... and the tongue of the catch will not depress until you enter the code again - so to use this, you have to enter to code to open, AND CLOSE, this. It does explain why there is a disclaimer on the paperwork saying that you can't hold the retailer liable for losses caused by you not closing and securing the safe properly... because that's quite likely if you're not careful.

Overall, I still really like this unit, and for the price, it is exceptionally good value. Only time is going to confirm or deny the corrosion-proof claim but so far there have been no signs of issues other than the 'not watertight' aspect of the design... and I have a way to fix that I think. MacGyver (and some rubber medical tubing I have in my 'random stuff' kit) to the rescue! I'm still going to leave it for a while to see if any of the local ratbags are able to get into it, but I get the feeling my spare key will be a lot easier to get at, and a lot safer in between uses, from now on. 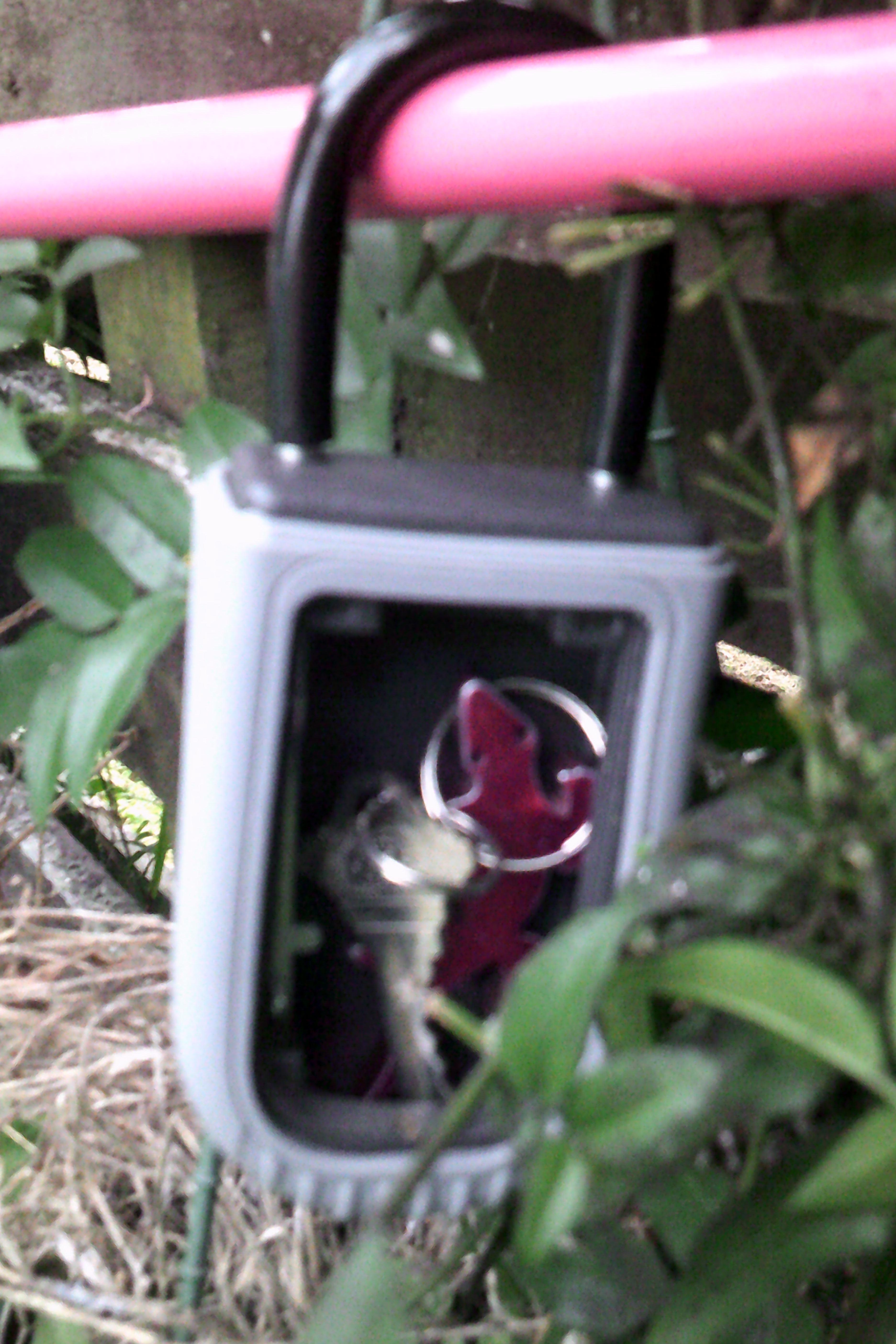 What a great surprise it was to open the packaging and find that there was a legible set of instructions included! I have often found that otherwise good products are let down by their documentation, and that makes assembly and/or access a nightmare! This time round, the manual contained everything I needed to know in order to get the safe working. Although the font was very small, it was clear and easy to read; no squinting or racing for a magnifying glass. Even the diagram was user friendly. Only one little issue occurred: the instructions said to turn the plastic screw on the back panel 180 degrees. I could not find the plastic screw it was referring to - until, by process of elimination, I realised that you turn each screw as you program the matching key. So if it had read "plastic screws" I would have understood!

Having ironed out that particular problem, I found the rest of the process simplicity itself. I positioned the safe on a steel rod that was part of the reinforcing I had added to a trellis so I could hang it there. The idea was that the safe would be within reach but the foliage would partially camouflage it. However, I realise now that there will be less foliage as the autumn sets in, so I might rethink where it is going to live. The beauty of this safe is that it can be moved - it does not rely on a backplate being screwed to a wall, which is the type that other family members have.

I did like the inclusion of the little screwdriver. I have left it in the case along with a spare key because I can never find a screwdriver when I need one in a hurry, so it seemed sensible to just leave it there. It is more than adequate for the purpose (removing the back plate and turning the plastic screws to lock the coded keys) because they are small with little resistance. Despite the ease of assembly and the simplicity of the screw system, the safe itself it quite robust: it is heavy, and appears to be delivering what it promises. Time will tell whether it will be weatherproof, or whether it will succumb to rust, but I will monitor it and see how it goes. First impressions are certainly positive.

I like the appearance of the safe. It has a plain metallic finish which will blend in with almost any background. The keypad numbers are a decent size for large hands, and the capacity is impressive. Currently I have one key and a keyring in there (plus its own little screwdriver) but I don't think it would be a problem to store twice that amount inside. That is much better than the model other family members have as they struggle to fit two single keys. This is the first time I have had the chance to use a key safe so I am impressed with it. I also like the idea of being able to relocate it without fuss; that means I can experiment to decide where the best placement is.

Pan, tilt and digitally zoom your way to a secure home enviroment with the D-Link DCS-8525LH wireless security camera.