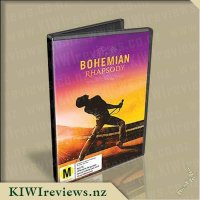 Disclosure StatementFULL DISCLOSURE: A number of units of this product have, at some time, been supplied to KIWIreviews by the company for the purposes of unbiased, independent reviews. No fee was accepted by KIWIreviews or the reviewers themselves - these are genuine, unpaid consumer reviews.
Available:
February 2019

The only thing more extraordinary than their music is his story.

Bohemian Rhapsody is a foot-stomping celebration of Queen, their music and their extraordinary lead singer Freddie Mercury. Freddie defied stereotypes and shattered convention to become one of the most beloved entertainers on the planet. The film traces the meteoric rise of the band through their iconic songs and revolutionary sound. They reach unparalleled success, but in an unexpected turn Freddie, surrounded by darker influences, shuns Queen in pursuit of his solo career.

Having suffered greatly without the collaboration of Queen, Freddie manages to reunite with his band mates just in time for Live Aid. While bravely facing a recent AIDS diagnosis, Freddie leads the band in one of the greatest performances in the history of rock music. Queen cements a legacy that continues to inspire outsiders, dreamers and music lovers to this day.

I remember while I was growing up my parents constantly having music playing in the house, from a very young age I was introduced to various genres of music, but found that I was particularly interested in rock music. Dad's favourite bands are The Beatles and Queen, I wholeheartedly believe that this is where my love of music came from, and will always treasure the memories of family sing-a-longs.

When I first heard that a film about Queen and Freddie Mercury was being created, I was ecstatic and hoped it would do Freddie justice. To me personally, if you asked me who I think is the epitome of rock legend, it would undoubtedly have to be Freddie Mercury. In high school I had to do a report on an influential celebrity, I of course chose Freddie - to me there was no 2nd choice. After doing countless hours of research into his life, I became quite obsessed with learning more. When Bohemian Rhapsody was released into the cinemas, I was stoked to hear all the fabulous reviews regarding the actor choices, and the portrayal of Queen and Freddie Mercury. Hearing all the adulation made me more eager to watch the film even more.

When I saw that there was a copy of Bohemian Rhapsody available to review, I literally squealed and quickly put my request in, I did not expect to be chosen as I knew this would be a popular film to request. I was absolutely thrilled when I found out I had been chosen, I waited (impatiently I will admit,) and when the package arrived I had it opened by the time I reached the door. On the cover of the DVD there is a man striking a pretty fabulous pose with microphone in hand, with a stadium surrounding and gorgeous colouring of the sky, which makes the darkened figure that much more impressive. The back of the case states the run time is approximately 134 minutes, but also included the complete footage of the Live Aid performance for the film. Once the children went to bed I sat down to watch.

Right from the initial menu I was captivated, before pushing play I could hear "We Are The Champions," which is one of Queen's most iconic creations. The start of the film focuses around the famous Live Aid concert, and we get our first glimpse of Rami Malek portraying Freddie, after this the film goes right back to the start of Freddie's journey into music, and meeting Mary. At the start Freddie has his hair long and curly, and we see the teeth Freddie was famous for. When Freddie joins the band Smile and has his first performance, we are introduced to a wonderfully talented performer, who likes to express his individuality. The idea of creating an album was Freddie's and so was the band name Queen, rather fitting for his persona. Through the film it is obvious that his father does not agree with or support the choices that Freddie has made.

The relationship shown between Freddie and Mary is one of the major story-lines, we see right from the beginning Mary supporting Freddie and his extravagant personality. We see as the film progresses that even though they break-up because Freddie realized his true sexuality, Mary was still a supportive friend with Freddie's best interests at heart. The film takes the viewer through the creation of Queen, Freddie's sexuality, his drinking and drug use after the rise to fame, the break-up of the band, and subsequently Queen getting back together for the Live Aid performance.

In my opinion, Rami Malek was the perfect choice to play Freddie Mercury, I honestly do not think that anyone else could have done the role justice. His strong portrayal, especially with the performances, is incredible, he oozed confidence and bought the role to life. The actors that were cast to play the other band members were well suited too, especially the actor that played Brian May.

I highly recommend this DVD to everyone, especially those that have heard of Queen, the various story-lines gel nicely together, and I found once I started watching I was mesmerized until the end. I would suggest having some tissues on hand, there are some teary moments! You will not be disappointed watching this. Subsequently I have now watched this DVD 3 times and have a few people keen to borrow. I am a firm believer that when Freddie Mercury died, the world lost a talented musical legend.

Catwoman is the story of meek, mild-mannered artist Patience Philips, who works for Hedare Beauty, a mammoth cosmetics company on the verge of releasing a revolutionary anti-aging product.

When Patience inadvertently happens upon a dark secret her employer is hiding, she is attacked and killed. But Patience is given a second chance - a second life in which someone not quite human resides. Someone with the strength, speed, agility and ... more...