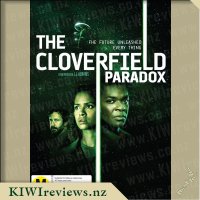 Disclosure StatementFULL DISCLOSURE: A number of units of this product have, at some time, been supplied to KIWIreviews by the company for the purposes of unbiased, independent reviews. No fee was accepted by KIWIreviews or the reviewers themselves - these are genuine, unpaid consumer reviews.
Available:
in selected retailers February 2019

Orbiting above an Earth on the brink of catastrophic energy wars, scientists test a dangerous device that could provide unlimited power but also runs the risk of creating a terrifying paradox, leaving them face-to-face with a dark alternate reality.

The Cloverfield Paradox had an ad at the 2018 Superbowl halftime show, making people aware of the film only hours before its release on Netflix. Now, an entire year later, it's being released on DVD. A very odd marketing strategy considering everyone with a Netflix subscription that wanted to see it would have seen it long before now, and demand from the remaining potential audience would be practically non-existent due to the length of time that has passed, and the generally unfavourable reviews it had received since it's release.

The Cloverfield Paradox was originally not a part of the Cloverfield series. In fact, it was quite far through production--under the name God Particle--before J. J. Abrams decided to link the film to the Cloverfield series and change the name. I really struggle to understand why they would try to create a franchise or cinematic universe in such a way when the film itself has nothing to do with the franchise premise and simply has a couple of scenes added afterwards. It feels like a very lazy way to try and bring in an audience. Granted 10 Cloverfield Lane was a great film if you exclude the final scenes of the film...which just happen to be the parts that were added to link it to Cloverfield. But I digress.

The film has a reasonably good cast, including Daniel Brühl (Captain America: Civil War, Inglorious Basterds, and Bourne Ultimatum), John Ortiz (American Gangster and the Fast and Furious franchise), Chris O'Dowd (The IT Crowd, Bridesmaids, and Thor: The Dark World), and Elizabeth Debicki (Guardians of the Galaxy Vol.2, Widows, and The Great Gatsby). So when a J. J. Abrams film with a well-known cast doesn't sit well with the critics, you can tell the script is not going to be very well written.

As far as the science fiction element of the film goes, the premise is an interesting one. The event occurs and you are thrown into an unstable and completely unknown situation that is dangerous to all crew on board the station. Unfortunately, while the film does a great job creating questions to try and engage the viewers, it answers very few of them. Leaving you feeling unsatisfied with how the film ends. It seems to be a common trope now that when the word "quantum" has been used that you can throw all science and logic out the window and do whatever you want that you think will create the most drama or look the coolest. But things that are unexplainable quickly lose their appeal, as your protagonists lose any form of control in the matter.

The film is in a way split in two, looking at the events occurring on the space station, and following the partners of one of the crew members on Earth. The Earth plotline does provide very little content to drive the story, however, and really could have been removed from the film with little to no effect. It felt shoehorned in there purely to try and link this film with Cloverfield and 10 Cloverfield Lane, showcasing certain aspects that were present in those previous films.

What is potentially the worst faux pas that the movie does is that it fails to "show not tell", instead, feeding exposition at the start of the film using dialogue on a blank screen or news footage. The worst thing about this is that for some reason they decided that they needed to give away the "twist" at the start of the film. The filmmakers have so little trust in the viewers' intelligence that they don't just place hints in the film, they outright tell you exactly what will happen before the events even start. It is rather infuriating. It's like being told the final score of a sports match 5 minutes into the game.

As it is, The Cloverfield Paradox is more supernatural than sci-fi. It has some great cast members, but their characters are all underdeveloped and end up trapped in a Final Destination remake that uses "quantum" as a means of justification. Visually, the film is fine. In terms of the script, the dialogue is clunky, has too much exposition, and doesn't answer any of the questions that it sets up. Altogether it creates an average film. If it was more science-based or at least attempted to explain events that occurred, then the film would be much more than it is, but as it is, you leave the film without satisfaction.

Most teenagers cringe at the thought of meeting their parents' high expectations--good grades, well-behaved friends, and a plan for the future--and none more so than Will Stronghold (Michael Angarano), the son of legendary superheroes Commander (Kurt Russell) and Jetstream (Kelly Preston). This clever Disney comedy follows Will from his first day as star student at Sky High, an elite school for the children of superheroes. The only problem ... more...