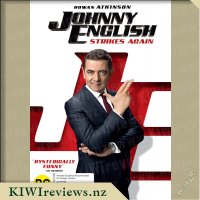 When a cyber-attack reveals the identity of all active undercover agents in Britain, the country's only hope is called out of retirement. English's new mission is his most critical to date: Dive head first into action to find the mastermind hacker. A man with few skills and analogue methods, English must overcome the challenges of modern technology - or his newest mission will become the Secret Service's last.

England is being hit by cyber attackers, which starts off with all the current and serving secret agents being uncovered and thus the healthy and retired must be brought back in. Of course, Johnny manages to stuff things up and ends up being Britains only hope. Thus he steps back into a service which is now anti-guns, pro electric cars and has health and safety terms and agreements up the wazoo. I was most pleased to see Bough back as Johnnys sidekick, I missed him in the second film. We follow English and Bough as they follow the clues, getting to use some old school gadgets (think 80's lollies) but also some new technology, which of course gets fumbled up and involves English using virtual reality, unawares that he isn't safely in headquarters.

There are plenty of laughs along the way, and not all of them involve English and physical mishaps, one of my favourite moments is when English first hears Boughs first name and has no clue who is being spoken about. Atkinson also proves to us that he is still fit and limber, which leads to a wonderful scene where he dances the night away on a high energy tablet. The villain is obnoxious and is very egotistical, definitely someone you don't wanna like, but still played well. The prime minister is played by Emma Thompson, very gullible, an alcoholic to boot and NOT who you'd want as the leader of your country. The film gives plenty of laughs and is just as entertaining as the first two if you're looking for some silly fun for a couple of hours.

The special features give a look into Atkinson and his comedy and led us through the plan and thoughts for the virtual reality scene, as well as the various gadgets used throughout the film, the cars (one of which is owned by Atkinson) and of course, locations and the cast/characters. I didn't particularly find the special features of great worth but the virtual reality clip was interesting enough. If you enjoyed the inept service of Johnny English twice before, then do watch this, it is entertaining, you know what's going to happen but laugh anyways. But as always, "The country is in a state of complete chaos, and the universe sends me you".

On the heels of their six-time Academy Award-winning smash, La La Land, Oscar-winning director Damien Chazelle and star Ryan Gosling reteam for Universal Pictures' First Man, the riveting story of NASA's mission to land a man on the moon, focusing on Neil Armstrong and the years 1961-1969. A visceral, first-person account, based on the book by James R. Hansen, the movie will explore the sacrifices and the cost- on Armstrong and on the ... more...