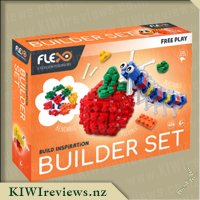 Every construction begins with a builder, and the Flexo Builder Set is your foundation to creative construction.

Perfect as an introduction to the world of Flexo bricks and tendons, you'll be working with all four brick shapes and the most popular 'Brights' palette. Getting this to review, my kids were quite keen to give it a real good go. They opened up the box and tipped everything out, their first reaction was to point out the huge amount of tendons that are inside this packet, their second was how they wished that there were a few more blocks to play with. Happily we already had some blocks, which they promptly added to the pile they'd created on the floor. All three struggled a little with removing the tendons from their sheet, so I was given that tedious task. I had finished one quarter when my kids asked me to stop, all of them feeling there should have been more blocks for the amount of tendons.

The remaining tendons have stayed on their sheet, but are inside our handy container, available for future use. With this kit there was information on where to get ideas and such for building, but my kids all said they would like to have had a small booklet with several ideas, so they could take their time with making them and not feel rushed from any of the videos. With three kids crowded around this, there wasn't enough to go around, two could just make it work but it was best suited to just one child at a time. Knowing how many blocks are in here, I wouldn't be quick to buy this pack at pretty much thirty dollars. That being said, the kids have, of their own accord, fetched these and had fun creating all sorts of 3D and bendy times, so could be a perfect suggestion for the grandies to buy them some. 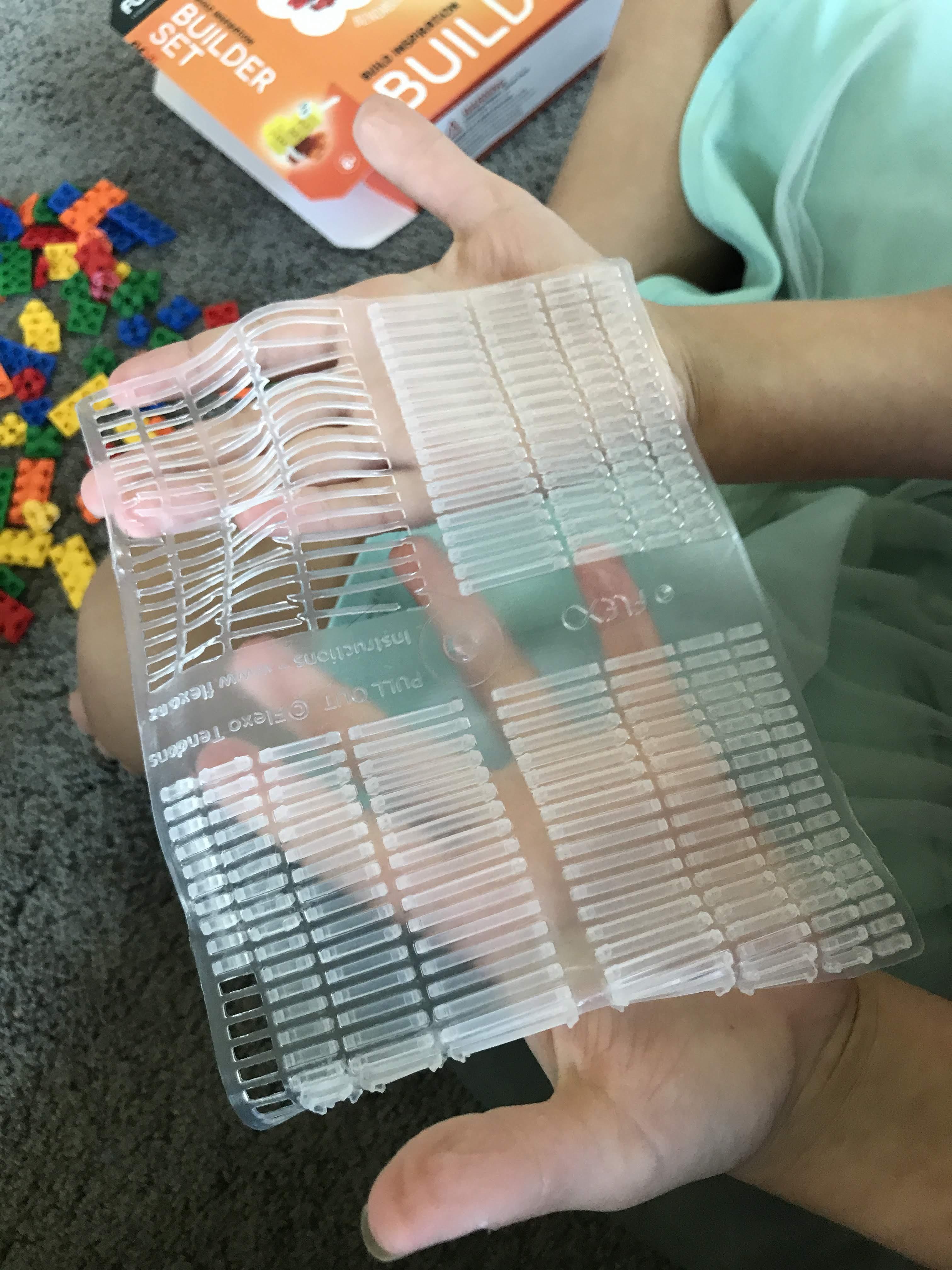 My kids (5 and 7 years old) love to play with Lego and can spend hours building and breaking apart Lego to create something new. Sometimes I think it's gotten a bit too easy for them and they need more of a challenge.

I think I was more excited than the kids were when I saw we had gotten a Flexo Builder Set in our review parcel. The kids could see that it was blocks but thought it was just the same as Lego until I pulled it out and opened the box.

Inside there was an inspiration page, some blocks and a sheet of what Flexo call 'tendons' (as in photo). One of the sheets in the box instructed us to check out their YouTube channel for tips, tricks and instruction videos so we headed there first and learnt an 'easy' way to release the tendons by pulling a few at a time to release them from one side and then you can pull them all out together. Unfortunately, even with this faster easier method my 7 year old daughter thought it was a tedious task to get them all out.

After going through the list of YouTube videos on my phone, my daughter decided on the video for instructions to make a potted flower with this set to start with. We watched the video through once and then went back to the beginning to try and create the flower alongside the video. This was much easier said than done and we ended up having to stop, rewind and start the video quite a few times to actually get the gist of it and put all our pieces together which my daughter found quite annoying but in the end she got there and I'm sure with practice she'll get faster too.

I do really wish that the instructions for some of the ideas supplied by Flexo were available in a download and print format like the Ocean Life Kits are. My daughter would have found it so much easier to do with paper instructions that she could follow at her own pace and I would have preferred being able to use my phone instead of her having to borrow it to watch the videos. We also have very limited internet at home due to being rural so I don't think this has been truly thought out by Flexo.

All in all, my daughter enjoyed making the flower and is happily breaking it apart to create something else now and my son is also trying to get involved so it's a win. 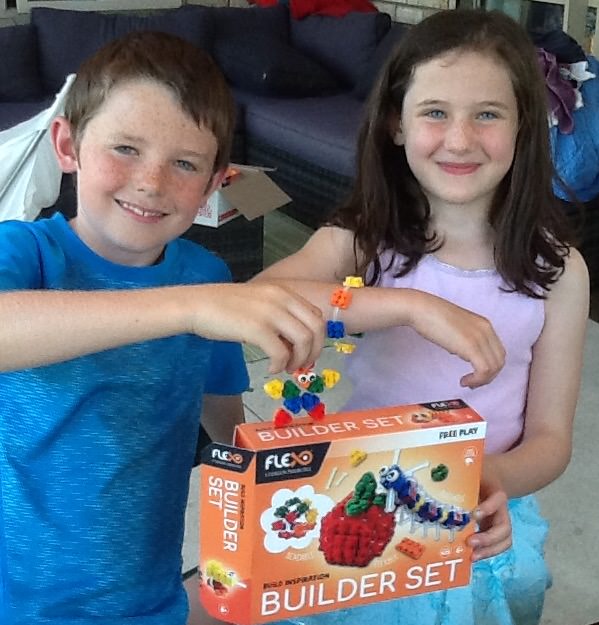 Mr Nine and Miss Six have a huge collection of plastic bricks, and they never tire of playing with them. They were intrigued when I brought along the Builder Set because this offered another dimension to their creativity - the chance to construct toys that would actually bend. This has always been a drawback with their old bricks because everything they build looks as though it belongs in an old-fashioned computer game. Now finally they have the chance to interface with the next generation of design.

The set is quite expensive to buy, but then so are the older style bricks - and the beauty is that they are fully compatible, so once the children have tried out the suggested designs they can carry on and make up their own creations. They were eager to get started so we tipped all the pieces on to a tray and they began to sort them. Some of the pieces (like the smallest tendons) are really tiny so they did not want to lose any.

They thought they would work together at the start so they could get used to the new method of joining. Once they had mastered the technique of placing a tendon, pushing it in using the multitool, and then locking it in place using a second brick, they were off. I was politely discouraged from helping because they wanted to do it all themselves so I contented myself with watching and taking the occasional photo. It was good to see brother and sister working amicably together, both concentrating totally on what they were doing.

Separating the tendons was quite time consuming but they appeared to be highly durable, keeping their shape when ripped apart. The children decided to leave some tendons on the sheet rather than separating them all, which seemed to be a good idea. That means there would be less chance of dropping some. Miss Six even checked the floor periodically in case a piece had fallen off the tray.

Mr Nine said he enjoyed this set better than his old bricks because it challenged him to think about what he was doing. The builder set does feature some suggestions on the outside of the pack but there is still plenty for the young engineer to work out. He liked the strong joints because he thought the finished product would hold together well, even if someone dropped it. He did say that the process took longer, but it was so interesting that the time flew for him.

Miss Six loved the bright colours and said they would be easy to find if you dropped them. She liked being able to take something apart if she did not like the way it was shaping up, and then being able to use the same pieces to make something completely different. Mr Nine had started to make a ball but changed his mind, so Miss Six took the partially completed ball, rearranged some of the pieces, and then remodelled them into a bracelet.

Both children appreciated that they were not confined to making the suggested designs on the box outer. They were free to use their imagination to produce anything they wanted. They were fascinated when they realised the tendons were all different lengths so they could experiment to see which size was best for each application. Miss Six, in one of her profound moments, observed that she had learned that sometimes you think something will be easy and then you find it is really hard, and then at other times you think something is going to be hard and then it turns out to be really simple. I agree with her; the chance to learn something new each time you try a new angle with a new toy is a valuable opportunity.

With their funny faces and tufts of fur on top of their heads, little girls will love these spinning top toys. Furreal pets that swirl and twirl! The faster you pull out the DIZZY CORD accessory, The faster your pets will whiz all around!

Available in single and twin packs, and dont forget the twirlin dance studio too.