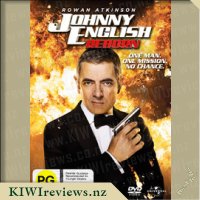 After failing an assignment miserably in Mozambique, English has isolated himself in a monastery in Tibet where he is trying to find himself and strengthen himself. Whilst there he receives a call back to MI7, where things have drastically changed and he ends up being tasked with uncovering who is behind a plot to assassinate the Chinese premier. With a boss who doesn't want him there, an inexperienced aid and a love interest, English sets off to see if he can solve the case and get back his, well, good name.

English is still as inept as he was in the first film, but as always proves that there are moments where he does have some smarts. There was a wonderful scene where he chases after a thief but whilst the thief does various death defying tricks, English takes the easy route, for example. the thief climbs down some building scaffolding whilst English takes the elevator... The elderly assassin also provides moments of entertainment, especially when she attempts to take out English, escapes and he then mistakes someone else for her, such as his bosses mother (never a good person to attack...).

I don't find the plot to be as good as the first film, I did feel there were moments where it was let down a little, however, this is still a highly amusing movie. I watched this recently with my eleven, nine and seven year olds and they loved it, some scenes had my nine year old rolling around with laughter and my seven year drowning out the rest of the rooms laughter. This isn't the best film of the trilogy but it is still thoroughly enjoyable and if you want a bit of fun, silly, entertainment, then this a good film to watch.

Around the globe, headlines break the news: a scandal takes down an Indian cotton tycoon; a Chinese opium trader dies of an apparent overdose; bombings in Strasbourg and Vienna; the death of an American steel magnate... no one sees the connective thread between these seemingly random events - no one, that is, except the great Sherlock Holmes, who has discerned a deliberate web of death and destruction. At its center sits a singularly sinister ... more...