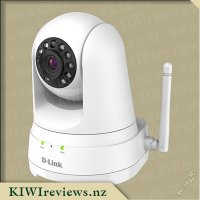 Pan, tilt and digitally zoom your way to a secure home enviroment with the D-Link DCS-8525LH wireless security camera. 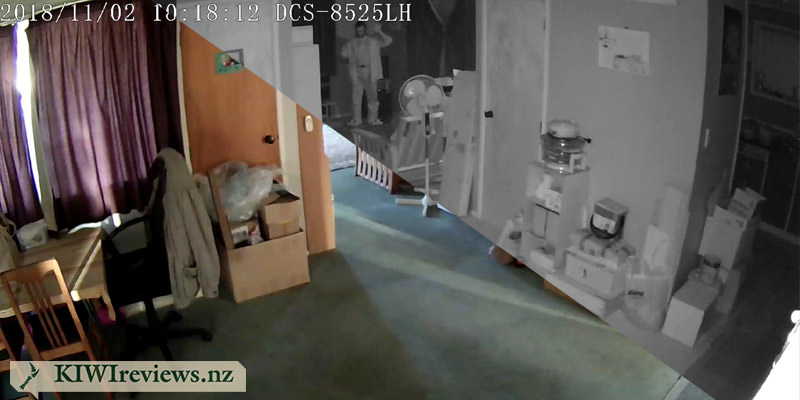 When it comes to discrete home security, "subtle" is the watchword... alas, despite its many great features, this keystone is one it fails on. Even a casual glance at this by an intruder and they will know they have been spotted. While some would say "that blows it for me" I personally think this is a great attribute for a security camera and one that should be used to your advantage. Having this camera in plain sight of the most obvious entry point to the house - usually the patio ranch-slider or back door - should help to deter any would-be home invader and prevent the intrusion before it happens. This, to me, is the height of home security - rather than worry about catching an invader, deter them from coming in at all! For those, however, who prefer a more low-key approach... you may want to consider some of D-Link's more discrete devices.

The camera can rotate almost a full 360-degree arc horizontally and close to 135-degrees of vertical movement - from straight-up to almost straight down. The camera has a wide angle of view in any position though, a 114-degree field of view. When all of these are combined, you have an almost full sphere of vision, albeit it takes time to scan around through the full range of movement and it won't do that very fast. Panning and tilting is all done through the app, which at this point is only available on Android and iPhone - no Windows or desktop support at this stage. Once you have the camera set up and connected to your mydlink account, you need only swipe or tap - you can choose which option in the camera settings - to make it move in that direction, but be aware that it slow and laggy, so it's all too easy to overshoot if you are using a small screen such as your phone. I tried this on a 10" Android-based tablet and found it a bit easier but still troublesome to centre the view exactly where I wanted it. Near enough is good enough, it seems. There is an option in there to set up to four pre-defined points of view, but I found it awkward to get them set up. Once done though, a simple click is all that is needed to make the camera move to that spot, so for some, it may be worth the hassle.

Set up is amazingly simple. As with the more modern range of D-Link devices, it only requires you to load the app, scan the QR code supplied on the box, the setup card or the base of the camera itself, and then choose which WiFi network you want to connect to. If you have rubbish WiFi, the camera does come with an ethernet port so you can connect it to your LAN via hardline - great for high-speed downloading of video files - or you can slip a microSD card into the onboard slot and record directly to card for easy and fast storage that can be accessed remotely via the app, or manually if you want to go that way. There is a subscription-based cloud storage system on offer too, and it's quite inexpensive really.

The camera has a built-in microphone and speaker, which make it great for setting up audio cues to trigger automatic recording, but the process is a bit daunting for the novice user. Rather than the simple on/off switch on previous devices, this one requires you to set up an "automation" - a step-by-step behavioural script that tells the camera what to do if it detects a noise or motion - then jump to another section to activate it and link it to the camera. While advanced users and geeks will find this to be a powerful and flexible tool for setting multiple behaviour options based on event logic which can then be applied to multiple devices, the average home-user will struggle to make sense of it, and will more than likely give up in frustration. There are a number of tutorial videos on the D-Link site, but embedding a simpler system for beginners, with an option to jump to the advanced mode may be a good idea for future software upgrades.

One of the biggest bonuses of the built-in speaker/mic pairing is that you can carry on 2-way conversations with anyone in range - great for keeping an eye on the kids while you're out, or for letting home invaders know they have been snapped and the police are on the way... though why you would want to scare them off before they are caught is a bit beyond me, but then my preference is that they be caught rather than given a chance to flee and potentially escape the consequences of their actions. Practical jokers will make great use of this feature, I am certain... I know I did.

The night-vision mode is, if anything, even better than previous cameras I have tested. While the specs say "up to 5m" my testing area has a range of just over double that, and I could still make out my face fairly clearly at 10m - more than enough detail to provide a positive ID to the police should it be needed. Of course, that's not to say everyone is going to be able to, or need to, utilise that kind of range. Smart placement will ensure that any invaders will pass close to the lens and get optimum illumination from the ring of IR LEDs. These glow very brightly in the visible range, which always surprises me when I think back to the old TV remotes that had IR lights that you could never see at all. Why these have to be lit up in the visible spectrum at all will never cease to baffle me, but for whatever the reason, they seem to be highly effective at their task and provide ample coverage too.

Other features that may be of interest and benefit include the integration with Google Assistant and Amazon Alexa, meaning if you have one of those devices in your house to give you voice command of smart devices, this camera will happily plug into that and listen to your voice commands. With the ability to stream video output to your ChromeCast, Echo or Amazon Fire TV enabled TVs, the voice-command option is brilliant design and gives you ultimate hands-free control. The camera also allows you to switch from 50Hz to 60Hz to reduce or remove annoying flicker from pulsating light sources such as older TVs, fluoro lights and the like. This can make the difference between footage that induces headaches and footage that can positively identify a home invader.

Overall, the price is quite reasonable, though a little on the high side for some people who want a simpler, more affordable device to add to their home security setup. What you get is reflected in what you pay, and while you won't get change from three big red notes, you will get solid peace of mind. When you take into account that this is the average excess imposed by most insurance companies, if it saves you from even a single claim, it will have paid itself off and saved you from months of hassle and paperwork.

Smoke detectors are one of the most essential accessories your home will need, but are often the last thing you think about! You would normally spend hundreds of thousands of dollars either buying, or designing and building your dream home and then, reluctantly, install large unsightly smoke detectors throughout - well not any more!