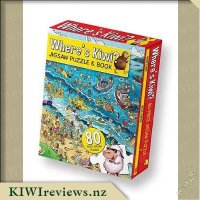 Disclosure StatementFULL DISCLOSURE: A number of units of this product have, at some time, been supplied to KIWIreviews by the company for the purposes of unbiased, independent reviews. No fee was accepted by KIWIreviews or the reviewers themselves - these are genuine, unpaid consumer reviews.
Available:
October 2018

Can YOU spot Kiwi? He's got itchy feet! There are sights to see and adventures to be had. There are waves to surf, rivers to raft, and mountains to climb! Join the great Kiwi hunt and piece together your very own Kiwi holiday puzzle. 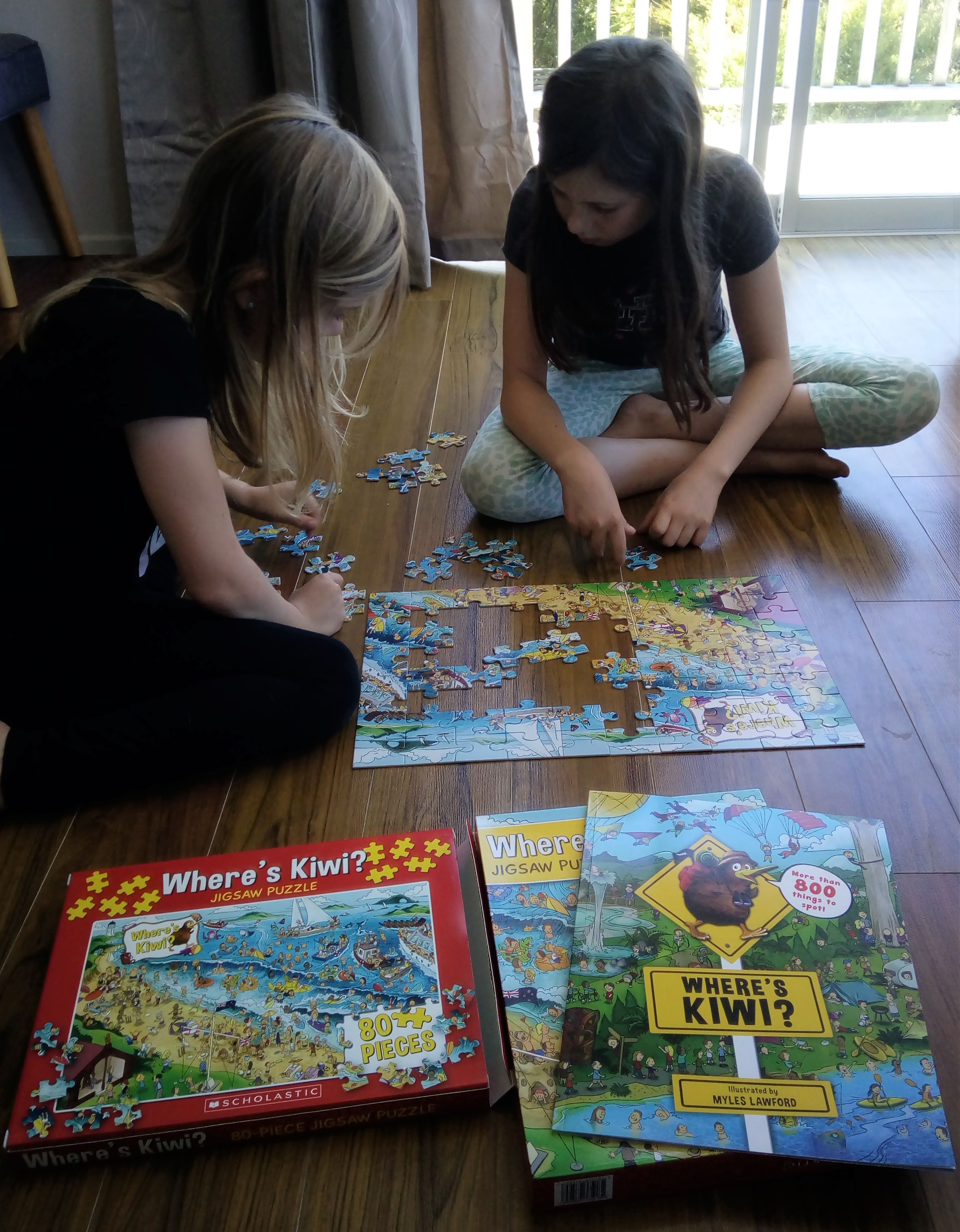 My 8 and 10 year old's eye's lit up when they saw the Where's Kiwi? Jigsaw Puzzle and Book and they begged me to open it straight away. They decided that they would do the 80 piece jigsaw first and I must admit I was so happy (and amazed) to see them sit down together and complete the puzzle with not one argument! It took them about 10 minutes working together to complete it and it was great that they didn't lose interest which is what they are prone to with larger puzzles. In fact, they were so engrossed with the puzzle that they didn't even notice me take photo's!

The Where's Kiwi? book is fabulous and there are 10 double pages of beautifully illustrated pictures featuring scenes that are uniquely Kiwi (Wellywood, Caving, Geysers) from the sub-tropical north to the icy south. The great thing about this book is that once you've spotted Kiwi, you can also hunt for his four mates, Sporty Sheep, Gumboot Guy, Wacky Wizard and Tricky Tuatara. The last page also features a list of (numbered) items for the reader to find in each picture. There are no answers to where everything is which means you can't cheat and also means it takes longer for the reader to find everything.

I must admit I've also been having a peek to try and find the crazy Kiwi! Since we've had the set I've often found my eldest sitting down quietly trying to find the Kiwi. When she had a friend visit she showed her the book and asked her friend to find the Kiwi saying 'how easy it was', which it wasn't as she'd often asked us to help her! Both my girls loved the puzzle and book and are still hunting for things. This would make a fabulous gift for any child! 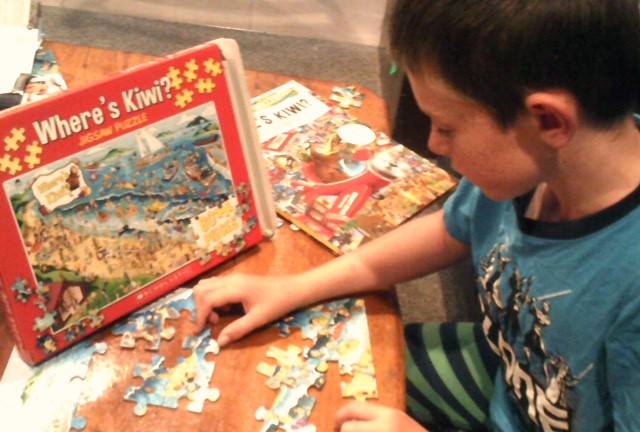 Mr Eight enjoys a challenge but sometimes it is hard to find something that is age appropriate - if it is too hard or too easy the enjoyment factor lessens. So we were both very happy to find that this product was absolutely perfect. He dismantled the packaging and decided to try the jigsaw first. Just for fun, we put on the timer so we could see exactly how long it would take. He spread out the pieces, and he was off.

Because we were doing a time trial, nobody helped him - although I watched with fascination, stopping on a couple of occasions to take his photo. He did not register that I was doing this as he was completely absorbed in what he was doing. It was clear that he was totally focused on the task; the outside world might as well not have existed because he was concentrating so hard.

As the last piece was slotted into place, I paused the stopwatch. Just under 18 minutes from start to finish! He had not consulted the picture on the box, so the pieces were assembled purely by matching shapes and colours. He had found Kiwi in the process as well as his other friends, so I thought that was quite impressive. This offers a great opportunity for honing skills of observation and problem solving! Incidentally, I was impressed by the quality of the pieces as they are strongly made, obviously designed to survive some rough treatment from over-eager children.


After the jigsaw, Mr Eight turned to the book. He already has another, similar puzzle book so he was aware of what was expected. Knowing what is needed and how you actually get to do it are two very different things, however. The pictures are so detailed that you can go cross-eyed trying to find one item! I gave up quickly; Miss Six helped, however, as the stopwatch was not operating this time round. He was still trying to find Kiwi and his four companions in the Wellywood picture when he was reminded that it was past his bedtime, so there is still some fun to be had tomorrow.

While he (and his sister) gave the jigsaw and book the thumbs up for quality, I would like to make special mention of the box. It is extremely well designed as the whole product fits neatly into a sturdy sleeve which can then live on an ordinary bookshelf. The jigsaw and book together are a tight fit which ensures that they are kept in position: this means that odd jigsaw pieces cannot fall out and get lost. The sleeve even has the product title printed in bold, bright script so that it can be easily identified. Altogether, this is a quality product which should last for some time - in fact, it is durable enough to be passed on to a younger family member once Mr Eight and Miss Six have outgrown it. And it is the ideal activity for a rainy day as a child can play on his own or with one or two others.

A dark silhouette appears at the end of the alley, and slowly moves toward you as you wait in silent anticipation. The figure is framed by the thin light managing to filter through the dark fog. The streets of Los Angeles are not a welcoming sight at this hour. You pull your hat a little lower, obscuring your appearance from this anonymous informant. He may be on your side, but you aren't taking any chances with a murderer on the loose. You ... more...