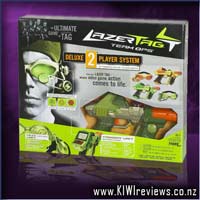 Disclosure StatementFULL DISCLOSURE: A number of units of this product have, at some time, been supplied to KIWIreviews by the company for the purposes of unbiased, independent reviews. No fee was accepted by KIWIreviews or the reviewers themselves - these are genuine, unpaid consumer reviews.
Available:
at Quality Toy Retailers

The TAGGER unit is your key to unbelievable excitement! An LCD Display control panel provides a live-action video readout of 7 game stats, and lets you see how you measure up to your opponents! Wireless set-up allows for quick and easy team play - your TAGGER unit actually "communicates" with your teammates' devices!

The HUD (heads up display) unit provides you with real-time audio/visual gameplay feedback! Fitting on your head just like a pair of sunglasses, it displays when you've locked onto a target, when you've tagged that target and when an opponent has tagged you! It's the ultimate in interactive play!

-hehehe- All of my friends are wary of going up against me when it comes to combat games, especially ones that involve fake-firearms, such as Splatter Zone or Lazer Strike... so I wasn't too surprised when they all had reasons not to play-test these with me... After all, despite my usual harmless demeanour, I get downright scary when you dress me in combats and hand me a gun of any variety... comes from 3 years living as a civilian in a military camp...

So, anyways, I finally found a willing victim... erm, I mean volunteer... and we set out to put these through their paces. Due to the muggy warm weather, we decided to trial it during the evening... light enough we didn't need to put the "Not suitable for night play" warning to a test, but late enough that it had cooled off a fair bit. So it was we set up a combat zone in the huge empty lot nearby and proceeded to battle.

Set-up was easy, we simply unpacked the guns and HUDs, slapped in a wad of batteries, and retired to our safe zones until the guns went -beep, good luck-... and then it was war. I had also fitted the Accessory Pack to my gun for the first game. At extreme range the guns are hardly more accurate than yelling "I got ya!" at each other and relying on honesty, but by the time we got within about 10m of each other (which is further than it seems) they are pretty accurate, especially if you actually learn the HUD symbols and their meanings.

When we started to get into the hide-&-seek section of the playzone, the smartest thing to do, we soon discovered, was shut off the gun's speakers and rely on the HUD's speaker to keep us informed, because at least 3 tags were scored by me, and 2 by my opponent simply by aiming for the sounds of the opposing gun.

I found the HUD to be rather awkward, since I need my glasses to see, and the HUD is not designed to be worn over spectacles. I do have a set of welder's safety glasses I use as sunglasses because they fit easily over my prescription glasses, however I found there was no way to remove the HUD unit itself for a transplant, without destroying it. So if you wear glasses, forget the HUD and play with the gun only. It works just fine without the HUD plugged in.

After a mere 8 minutes of combat, I had scored 10 tags against my opponent, and he had scored an astounding 7 against me... I was impressed. So, we decided to have another round, this time upping the odds... as the winner, I had the chance to 'host' the next game, meaning I could set the rules and restrictions on my gun, and my opponent got their gun reprogrammed by mine. So, 30 tags to win the game, a maximum of 5 reloads allowed... and off we went... this time it took me 15 minutes to win. -hehehe-

I thought I might have had an unfair advantage because of the added accessories, so we swapped them over to his gun, and had another customised round, I still won, but only just this time, with a final score of 30:26, with me on my fourth reload, and him on his 5th. I was impressed, majorly impressed. The extras certainly did add an edge that the 'raw' guns are lacking... primarily the scope I think.

Overall, a very cool toy! We didn't really get a chance to trial the ZONE games, or the 3-team variants, mainly because I couldn't find any local team or club, but in the bigger centres there is bound to be a number of (semi-)organised team events, or at least enough players to make some. I suggest that if you think this is a fun idea, you get in touch with local retailers and see if they have any details of other players, and if not, see if they would be willing to let you put up a poster or flyer seeking contact from other interested players.

I kinda got my butt whooped here. no one warned me my competition was such a tough player. but the game was a lot of fun regardless. I thought the gun was easy to hold and use but I kept hitting the shield button when I pulled the trigger because it sits right under the trigger guard and is activated by the tiniest squeeze. I think it would have been better to have moved it up front to the reload lever or something so that you dont trigger it by accident. when you are in shield mode you cant fire and I got shot 3 times because I was not able to shoot and had to stop and figure out why. I might have won at least one game if I didnt keep hitting the shield. I really enjoyed all three games despite getting whooped each time. I am planning to go out and buy a set of these so that I can practice and get my turn to kick his butt next time.

Plus-Plus is a new toy having gained a tremendous popularity over the last few years in its home base in Denmark. The success has been developed together with the leading toy retailers, specialty stores as well as with schools and other institutions.

Made from food-grade approved Polyethylene, Plus-Plus develops the imagination and creativity of children and appeals evenly to boys and girls. Once Plus-Plus has been tried out it ... more...