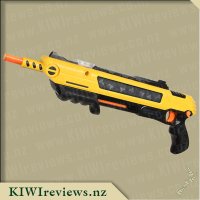 Insect hunting for sport has entered the 21st century with this fun, new, non-toxic device! A miniature shotgun effect is emulated through this ingenious design.

This is no joke! The Bug-A-Salt shoots a shotgun spray of regular table salt and decimates flies on contact, without making a mess - the common housefly is easily obliterated with just one blow, but remains whole and intact for easy cleanup.

Features:
•  Non-Toxic. Uses standard table salt with 80 Shots before reloading
•  No batteries required
•  Extremely inexpensive to use
•  Excellent for flies on windows. Will not splatter flies
•  Excellent for bugs on ceilings and in corners
•  Fun - Say goodbye to insect intruders
•  Non slip grip handle & pop up sight indicator
•  Available in a range of designs 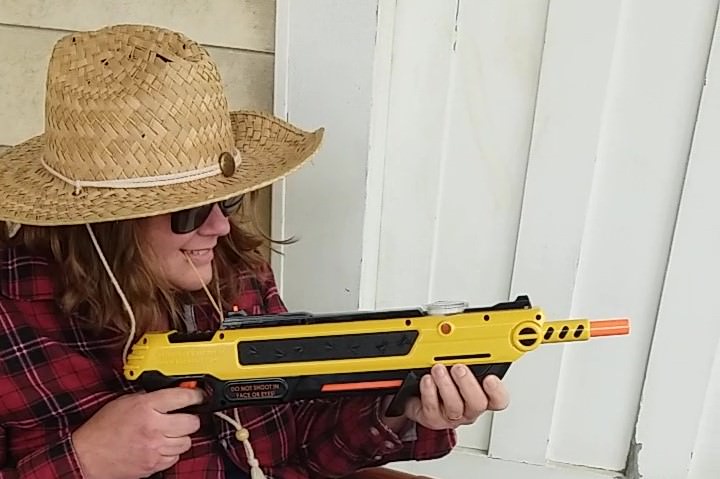 I hate flies with a passion and in summer we are overrun with them. I've tried solar zappers (they don't work) and I don't like using chemical bug sprays in the house. The only mild success we've had is with the horribly ugly sticky fly paper that hangs from the ceiling and looks like a lollipop Shrek would love when it's full. I was so excited when I had the opportunity to trial the Bug-a-Salt, a non toxic, pump action gun that uses salt to kill flies.

My husband couldn't contain his excitement when he saw the gun and had it up and running in 30 seconds. What we were lacking was flies so he went on the deck to practice shooting and aiming, as recommended by the instructions. When an unlucky fly ventured into the house my husband grabbed the gun first, aimed, took the shot and then we watched the fly drop to the ground! This gun left the dead fly in one piece so it was easy to dispose of with no nasty maggots making an appearance! As the weather improved we did notice more flies make an appearance which was now welcome! Sometimes the fly took more than one shot (even at close range) to die but by the fifth shot it was a gonna! My husband got home from work one day and asked what the residue on the kitchen window sill was. He then looked at me and said 'You've been busy killing flies, haven't you?' The gun does leave a slight salt residue which is easy to wipe clean and it doesn't leave a huge mess on the windows either.

The gun is recommended for adults and is very easy to use. You fill the small container on the top with salt, cock the gun (which makes the rear sight pop up), take the safety off and off you go! We've had friends round who have been keen to try it and one shot his hand to see how powerful it was. He noted that although it wasn't painful, it did pack a punch so I've had a discussion with my girls about gun safety and explained that it's not a toy for them to play with. I've enlisted them as my 'fly spotters' so as soon as they hear or see a fly they come and tell me!

The Bug-a-Salt is a marvelous, fun and effective fly killer! I love that it doesn't harm the environment, doesn't need batteries or power and is cheap to run. I can't recommend it enough and I can't wait for summer..... bring it on!!

I don't hate flies - they have a place in the ecosystem and that should be respected... but there times when you just have no recourse but to remove them from the script. You can use automatic spray-cans, if you want an indiscriminate layer of chemicals all over your food prep area or bed. You can use manual cans, but they only allow you to apply less chemicals to your environment.

There is, of course, the good ol' newspaper... if you don't want to read it any more and have no issues with scraping up fly guts... and the remains of anything that you may have hit, bumped, nudged, jostled, spilled or broken in your efforts to de-fly your immediate surroundings.

Then there is this... the Bug-a-Salt v2 gun. A spring-loaded, compressed-air powered, salt-firing fly destroyer that is a lot of fun to use, harms nothing - environment, people, animals, personal belongings and buildings - and can be reloaded in seconds with enough salt to last 80+ shots for less than 10 cents. What more could a Kiwi male want leading into BBQ season?!

The first thing I noticed was the big white sticker on top, sealing the salt hopper. It states that you should always treat this as though it were a loaded firearm - which is excellent advice. Even though you would be hard-pressed to damage a living creature if you hit them on the back or belly, if you fired this into an eye or open orifice (eg. mouth, nose or ears) you could do some damage. Potentially serious damage at short range. This, more than anything else, impressed me. Not that the gun failed to impress in any way, but the fact that this step was taken showed me this was a serious device, not just another toy like a Nerf gun.

Using the gun was simplicity - there are a number of great videos on the Bug-a-Salt NZ website that explain how to operate it. The biggest things to keep in mind are that the rear sight pops up only when the gun is loaded, cocked and ready to fire, and that you must use your thumb (assuming you are right-handed) to flick off the safety before you can let-fly with the high-speed salt.

While I had no plans to let him fire the gun, I did get my youngest son to try and cock it. He's not weak, but he's not strong either, and he had no real trouble either, which means that even if you have low arm-strength - say elderly or injured - then you can still reasonably expect to make good use of this device. It suits a wide range of ages and abilities. If you get the laser spotter, and calibrate it right, you won't even need to worry about aiming through the sights - light it up red, click and it's dead.

I found that most flies could be stunned on the first shot, and a second close-range blast to the head area seemed to kill them. I got a few lucky shots - took a few down while they were still in flight, a couple landed facing me so got a head-shot on the first try, etc. - but some of the bigger blowflies took 2 or 3 shots to take them down and a final coup de gras shot to finish them off. One particularly burly brut took 6 shots at near-point-blank range and still managed to walk it off! I just shoo'd him outside with a mumbled apology and best wishes to the wife and maggots.

I did find it was almost utterly ineffective against cockroaches. The first one I encountered took 12 blasts at a range of less than 20mm and scurried away under a tree stump before I could get it again. So, add another thing to the list of 'things that won't kill a cockroach'.

Overall, I found this to be a highly effective, massively fun way to deal with the flies, and with plans to renovate and use the BBQ before Christmas, I want something I can trust that won't ruin food or appetites. I have to wonder though - how well this could deliver a herby salt mix to a steak while it's cooking. It's a few steps up from the tall wooden pepper grinder when it comes to conversation-starters around the grill, that's for sure! Highly recommend this to anyone who wants an eco-smart way to deal with flies and other (non-roach) pests during the warmer months.

Savour the moment and delight in a few quiet minutes of rejuvenation as you cleanse and refresh all over. Regenerate as this natural, soap free body wash helps to create healthy glowing skin with clever natural antioxidants Acai Berry, Pomegranate and Vitamin C.