ProdID: 8045 - The X-Files: The Complete Season 11
Directed by Chris Carter and others 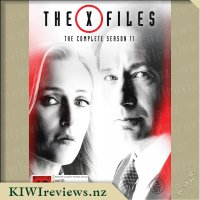 Disclosure StatementFULL DISCLOSURE: A number of units of this product have, at some time, been supplied to KIWIreviews by the company for the purposes of unbiased, independent reviews. No fee was accepted by KIWIreviews or the reviewers themselves - these are genuine, unpaid consumer reviews.
Available:
July 2018

The next chapter of The X-Files is a thrilling, 10-episode instalment of the mind-bending series that straddles the line between science and skepticism, between that which can be proved and what we choose to believe. David Duchovny and Gillian Anderson return as FBI agents Fox Mulder and Dana Scully, investigating unsolved cases rife with unexplainable mysteries, government conspiracies and alien cover-ups. Mulder and Scully's desperate pursuit of the truth continues with a search for their long-lost son, William, but they're not the only ones looking for him, and the fate of the world could be at stake. One thing is certain: secrets will be revealed ... and the truth may finally be within reach!

Each episode has a different director. Chris Carter, creator of the series, directed Episodes 1 and 10. The rest of the episodes were directed by Holly Dale, James Wong, Glen Morgan, Carol Banker, Darin Morgan, or Kevin Hooks

I have long been a fan of The X-Files so welcomed the opportunity to watch the latest season. I suspect it is useful to be familiar with the overall themes and format of the previous seasons before approaching this one (although there are some references to previous events throughout). Failing that, there is a useful rundown of the storyline on imdb.com and also on Wikipedia for those who might need some background. Luckily, I was familiar with what had gone before, so was ready to tackle the newest offering with enthusiasm.

The main protagonists are once again Dana Scully (played by Gillian Anderson), Fox Mulder (David Duchovny), and Walter Skinner (Mitch Pileggi). The basic storyline centres around the quest to find William, Scully's son. William is now a teenager and no longer at home, so this makes locating him a challenge. However, this is only one element of the story. Add in the supernatural element, the conspiracy theories (harking right back to Roswell and beyond), the convoluted relationships within Mulder's family, and the political climate (both current and past) and a simple story suddenly becomes extremely complicated!

In true melodrama tradition, current events and well-known people are woven into the story. Moving images of people like Donald Trump, Kim Jong-Un and Vladimir Putin are superimposed into certain sequences so that they appear to interact with the characters. Former US presidents such as John F. Kennedy and Richard Nixon also feature. In this way, history is rewritten to explain various conspiracies that the government has been a part of, and to accommodate new outcomes. There is even a reference at one point to "fake news"!

The supernatural element is a theme which has been present in the series right from Season 1. Originally Mulder was willing to believe in various possibilities while Scully remained the sceptic, but she has now reached the conclusion that things she had never believed possible have now proved to be so. For an avid sci-fi fan, of course, there is no such thing as scepticism. It suffices to simply sit back, accept whatever fantasy is presented, and just enjoy it.

Every season has an element of comedy; this one has the funniest sequence yet. The seventh episode has the unpronounceable title Rm9sbG93ZXJz, and provides some light relief in the middle of the story. The first six episodes are devoted to the mostly serious storyline with accompanying villains, ghouls, supernatural monsters, deceitful politicians, etc. All of a sudden, in Episode 7, the viewer is offered a hilarious commentary on just how many things can go wrong when you rely too heavily on technology. There seemed to be few or no links to the rest of the story (apart from the same characters being featured), but it was seriously funny so I did not mind at all.

The other mandatory element in the X-Files series is the inclusion of a monster-of-the-week episode although it could be argued that Season 11 contains more than one of these episodes! However, Episode 6 (Kitten) probably comes closest to the usual monster sequence. It is left to the viewer to decide whether the "monster" really exists or is a side-effect of warfare. Whichever this may be, there are some very gruesome deaths in this episode which confirm the R16 censorship rating it has been awarded.

The extras included with the disc are both interesting and informative, although it pays to watch them after the episodes have all been seen because they contain several spoilers. It was intriguing to find out just how much technology has advanced since the first seasons aired - many of the establishing and aerial follow shots are now done using a drone or a technocrane. The quality of the transitions is also much slicker than in past seasons, due again to advances in filming methods. I did notice that one of the extras listed on the outer case (Deleted Scenes) was not included however. Presumably there weren't any!

I enjoyed this box set so much that I watched it all in two sittings. It was impossible to leave it, and given that the episodes are only 45 minutes each on average, it can be comfortably watched over two evenings. I am now inspired to track down the first ten seasons and watch them again; I had forgotten what compelling viewing this can be. I understand that Season 12 is in the planning stage, and I can't wait!

But before she knows it, Chloe has an unusual friend hiding in her garden shed when it looks like Mr Stink and his dog Duchess, might be driven out of town. As Chloe struggles to make sure no one sniffs out Mr Stink, she also has to cope with an overbearing mum, her put-upon dad who has a secret ... more...