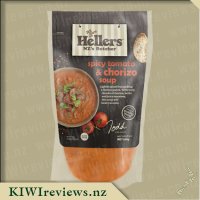 We've now taken your classic, favourite soups and paired them with our delicious, premium meats.

Lightly spiced but packing a flavour punch. With tasty chunks of chorizo, herbs and juicy tomatoes, this soup will bowl you over. 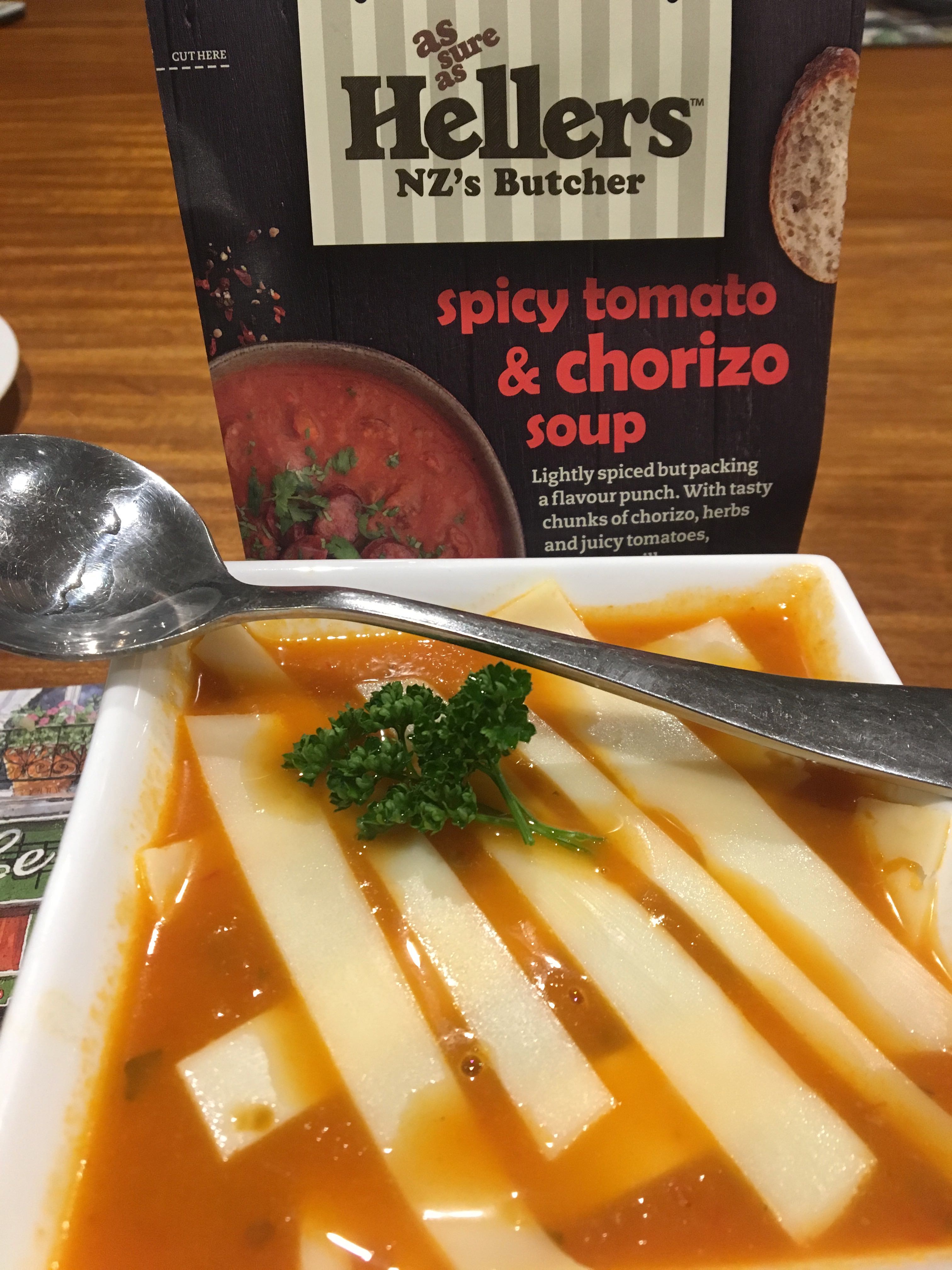 This is the soup out of the Hellers selection I was given to review that I knew the kids would most likely turn their noses up at. Sure enough, both of them looked at it and weren't really interested in even trying it. Of course, in the interests of getting an opinion from the whole family (and the desire to widen the kid's palates), I got them to try it. Both Mr Eight and Miss Six found it too spicy and didn't like the general flavour anyway.

Then it was over to my husband and me to try it. I tipped it into microwave safe container (as per the instructions on the back) and microwaved it for 2 minutes. We found that our microwave needed more like four minutes to make it hot enough for my husband's liking. I had some slices of Swiss cheese in the fridge and I thought that it might make an interesting combination with the Spicy Tomato & Chorizo Soup. I cut it into thin slices and layered it over each of our bowls and topped it with a sprig of parsley.

We found that the soup had lots of flavour and a bit of spice. I am not into excessively spicy food, but I found it rather nice. I was impressed to see actual pieces of chorizo in the soup. There were also lots of other bits in the soup, so it had a good texture it it. It felt like we were eating a meal rather than drinking a smooth soup. We both liked that. We did find that the pieces of chorizo had obviously been drained of their flavour during the cooking process as there wasn't much flavour to them when we ate them. The overall experience of the soup, however, was that there was plenty of flavour.

The cheese made a great addition to the soup. As it melted, it went really stringy and added a bit of fun to the meal as we ate it. We found that the soup made a meal on its own and we didn't feel the need to dunk any bread into it. It was a reasonable serving for the two of us and we felt it was enough for either dinner or lunch.

This soup had quite a bit less sodium than the sweet corn & bacon chowder and because this was also my husband's preference, it would be a possibility for me to buy it for an occasional work lunch for him. For me personally, I enjoyed trying it, but it wouldn't be a favourite of mine.

Yum... I love a good tomato soup, it is by far one of my favorite flavors of soup to enjoy over Winter, though I am never any good at making my own, and when it comes to buying tomato soup at the supermarket well you never know what flavor or quality your going to get, there's either always no taste, to much sugar or it's way too watery. After having tried out the 3 other soups in the Heller's range previously I was sure this one was to be up to the same standards and that I would love it... luckily I was right!

The labeling on the pouch is great I love the dark background which really makes the red font and images of the tomatoes and soup pop and stand out well. The image shown on the label really represents what you can see in the see-through free-standing pouch of soup which is great as you know you truly are getting the real deal rather than being left unimpressed by a glorious photo-shopped image that is nothing like the inner contents which is often the case with such products.

I first decided to try the soup for dinner one night while my partner was on night shift as he's not a big fan of tomato based soups. I poured roughly half of the pouches contents into a soup bowl and heated it in the microwave for 3 minutes in which time the soup was piping hot and ready to serve, I had the soup alongside a couple of toasted garlic bread buffet rolls which made for the perfect light meal. The following night I was making a spaghetti bolognaise, when I realized that I only had a small amount of tomato puree left in the fridge to work with, luckily I had the idea to use up the remainder of the spicy tomato & chorizo soup pouch in place of the missing puree. Due to the lovely thick consistency of the soup, this worked perfectly and you would have never known any differently, the chunks of chorizo and the beautiful spices and herbs used really made the flavor.

As far as tomato-based soups go this is by far a standout winner - a beautiful rich tomato flavour, which I must add is definitely made from REAL, FRESH tomatoes, with the perfect blend of herbs throughout and lovely big chunks of Chorizo sausages, one of my favourites, and something which they certainly didn't skimp on putting in the mix as there were generous sized chunks throughout the soup which really helped to boost the flavor. If you like tomato soup give this one a try there is no way you'll be left disappointed. 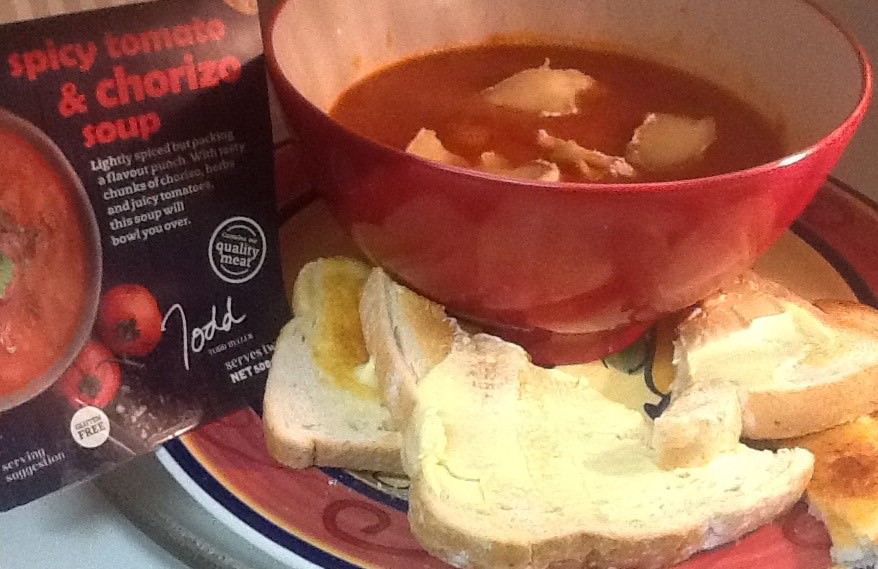 I am always a little wary when someone gives me a new brand of tomato soup to try. So many of them taste exactly like watered down budget tomato sauce, not something I am keen to try or to recommend to others. I was relieved, therefore, when I tasted this chowder. I will admit to trying a teaspoonful first just in case I did not want to try it at all, but it was all good. My first impression, from this small sample, was that it tasted just like fresh Roma tomatoes. My favourites!

I served it with buttered toast and floated some brie on the top, and we settled down to enjoy it. I was really impressed at how thick and creamy it was, so thick that it did not even drip off the spoon and decorate me! Of course, this is not a soup - this is a chowder - and despite the similarities, chowders are so much better in every way. The cheese melted into the liquid, the toast was duly and somewhat indelicately dunked, and we had a ball. I love eating this kind of meal at home when you can slurp and dunk to your heart's content.

The chorizo made an intriguing addition to the `chowder. It was sliced into rings which added interest and flavour to the whole. Chorizo is quite chewy and has a spicy aftertaste, but the soup had taken up some of the flavour so the heat was spread. It was hot enough to be tasty, but not too strong, so you could add more chilli if you wanted to. We decided to have it without adding any extras because the cheese was very ripe and strong, and we did not want to make too many changes.

To make the soup go further, I would serve it with large chunks of garlic bread rather than toast, and add some more chorizo (as suggested on the pack). It could easily stretch to feed three or even four people in this way with a minimum of fuss. it would be a useful item to keep in as it is so quick and easy to prepare, and would also be handy to pack in a chilly bin when travelling because it can be prepared in a motel room (using our trusty microwave travel soup mug) to ensure that we eat proper food. And proper food it is - there are no junk ingredients, only good solid food. Just what is needed after a long day!