« Time to Smell the Roses - A New Life in Ophir review 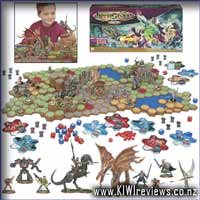 Disclosure StatementFULL DISCLOSURE: A number of units of this product have, at some time, been supplied to KIWIreviews by the company for the purposes of unbiased, independent reviews. No fee was accepted by KIWIreviews or the reviewers themselves - these are genuine, unpaid consumer reviews.
Available:
at Quality Toy Retailers

•  Warriors from across all of time have been collected and brought to you.
•  More than just a strategy game, embark on a build and battle fantasy adventure like no other. You build the environment, making every encounter unique.
•  Then select your team. From futuristic spies to the cunning of a samurai warrior, you choose the best armies from different times and universes. Assemble your forces of power wisely, arrange them on the battlefield and let the battle of all time commence!
•  The Heroscape Master Set contains 30 painted figures, hundred's of building hex tiles, 2 ruins, game cards, markers, dice and an instruction booklet

Many years ago, more than I care to specify, I was introduced to WarHammer 40k... it never really appealed to me, primarily because it seemed to invlive more time setting it up and packing it away, then it did to play a half-way decent game... and the BIG games, well, yeah, that took a massive amount of floorspace, and often days to play. If it had been more... compact... then perhaps I would have been more captured by it.

Now, more than a decade later, (oops, did I just say that?) I get exposed to this game... a desktop version, with simpler rules, no tape-measures, grenade templates, flame-thrower templates, or extra accessories. (Though the people playing WarHammer 40k did use polystyrene landmarks, and flamethrower attacks were made using aerosol cans and lighters... ,b>that was kinda fun! But it wouldn't work with this...)

It took nearly 20 minutes to carefully unpack and set up the playing board, though it would have been faster I suppose, if we had made one of the predefined playzones listed in the back of the manual. The maps are designed layer-by-layer, making it so easy to assemble... but who reads the manuals before getting stuck into the game these days?

My opponent and I played a game using the 'basic' rules first, where basically characters face off, 1 undefended hit and BANG you're dead. The game lasted a mere 12 minutes, and my armada was wiped out in a humiliating, crushing defeat. After a rebuild of the board to erase the unfair height advantages the previous terrain gave my opponent, we played a game utilising slightly modified 'Master' rules, allowing us to take advantage of the various special attacks and defense tricks each character had, and this time the tables got turned and my evil horde utterly stomped the army of light... heheheheh

The game has in infinite array of possibilities when it comes to terrain, giving you the chance to really let loose, creating eveything from dungeon mazes, to towering steeples, swamps, river deltas (like the one I have made and put in the Downloads Section for anyone to grab if they want it) or basically anything else you can dream up, utilising the huge array of land and water tiles that come with the set. Some of the pre-planned playzones are stunning, but nothing beats your own imagination. If you plan to build a playzone, I recommend you visit your nearest games supply shop and buy a pad of hex-grid paper, so you can make your own layer maps in case you want to rebuild it again in the future.

The biggest 'down side' to this game... trying to put it back in the box afterwards. Here's a couple of important hints...
•  All the land tiles stack face-down.
•  You need to 'hide' the water tiles, the army cards and the artifact markers inside the layers of stacked land tiles.
•  It doesn't matter how you try, unless you have a photographic memory for how they were stacked before you peeled it open, you'll never re-stack it all successfully in under 3 tries.
•  Putting all the 'little things' in resealable ziplock bags... bad idea. You'll never fit it back into the box.
•  If you can find a way to label the shaped-plastic tray, you'll find it a lot easier to put the playing pieces back in their correct places. Try a good label printer if you can afford one, or know someone with one.

Overall, this game is now my current favourite. I have been busy making Photoshop templates with all the right pieces shaped out, so that I can design new playing zones without going through the hassle of packing it all away again, although with practice, it is becoming easier to remember the right combinations that will make it fit. Where's a TARDIS when you need one... Biggest suggestion... after you unpack it, throw the box away and go hunting for a small carrycase that has plenty of room to store all the bits. Trust me on this... if you like this game, you are going to want to buy the expansion sets, so you'll need the extra room eventually.

I have been a great fan, and have tried playing, Dungeons and Dragons for many years. The biggest problems I had were remembering what moves I had made and who, if anyone, I had attacked. This game helps with those things. It is still turn-based, as in the traditional game, but you can see at a glance where all the characters are and what damage they have inflicted or incurred.

I really liked the way the hex-pieces came in varying sizes and numbers. The mere thought of trying to design the landscapes that I have played on so far with single hex-pieces, quite frankly, scares me. The option of being able to build caves or hills added a certain quality to the fun of set up I wasn't sure I would like, but did. Another thing I liked about this is that you aren't stuck with just 'fantasy' pieces i.e. Dragons and Dwarves. You can choose from soldiers, samurai and secret agents with cool 'Ghost Walk' ability.

For what you get in the box, the price is really pretty reasonable, but my being on a fixed income places it slightly beyond my means. Trust me, if this were not the case, I would have gone out and got a set myself and started playing it with anytone interested.

In all, a most excellent game and one I look forward to playing again.

Set up your fleet, scan the radar, crew to battle stations. When you find an enemy ship, lock target, aim your torpedos and fire. Can you blast them out of the water? You have just 3 chances to hit your target.