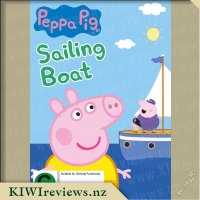 Disclosure StatementFULL DISCLOSURE: A number of units of this product have, at some time, been supplied to KIWIreviews by the company for the purposes of unbiased, independent reviews. No fee was accepted by KIWIreviews or the reviewers themselves - these are genuine, unpaid consumer reviews.
Available:
July 2018

A little pig named Peppa and George have journeys every day with their family and friends.

Grandpa Pig is taking Peppa and George sailing, but they keep getting stuck in the mud!

Terminator 3: Rise of the Machines
Rating: 8.8

Like many young children mine have watched Peppa Pig on television in the mornings, and have subsequently become obsessed with her and the show. When I saw that there was a new Peppa DVD available to request to review, I thought my children would like it as a treat to watch. When the review box was opened I was instantly asked to put the DVD on for the children to watch, I did so and sat back and watched with them while getting cuddles.

The front of the DVD case has lots of varying shades of blue which is fitting as the DVD is called 'Sailing Boat.' A bright, smiling Peppa draws your attention and also seen are Peppa's brother George and Grandpa Pig on a sailing boat.
Turn the DVD case over and you can clearly see there are 9 episodes on the disc, with the running time being approximately 45 minutes that means each episode is roughly 5 minutes long. Throughout the DVD you are taken on various adventures with Peppa and her friends and family, including visiting Grandpa Pig's place and seeing his greenhouse, a day on the boat, and my son's favourite was the episode 'Digger World.'

The episodes were just the right length for my 2 year old as he didn't get bored before each episode finished. Throughout the DVD we see Peppa as a happy, kind pig who is very funny. There were numerous times my children were in fits of giggles. The children were captivate and have since watched the DVD several more times. I could only watch it once as personally Peppa's tone of her voice was starting to drive me crazy hehehe. I recommend this to anyone with young children, probably best suited for aged 5 years and under.

Man of Tai Chi is a 2013 Chinese-American martial arts action film on DVD, directed by and starring Keanu Reeves - a multilingual movie partly inspired by the life of Reeves' friend, stuntman Tiger Chen.

Tiger Chen is a Tai Chi student who is rather rebellious and uses Tai Chi to fight despite his master's concerns. When the temple where he studies get threatened from modern redevelopment, he fights in an underground fight club to get the money the temple needs. However he soon realizes that his employer has other, more sinister, motives.