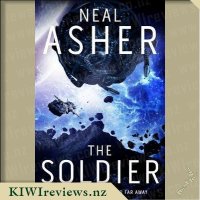 Rise of the Jain 1 - The Soldier product reviews

Her mission is vital. Her failure is unthinkable. A corner of space swarms with alien technology, a danger to all sentient life. It's guarded by Orlandine, who must keep it contained - as it could destroy entire civilizations. An alien intelligence shares her vigil. But she doesn't share everything with Dragon... Orlandine is hatching a plan to obliterate this technology, removing its threat forever. For some will do anything to exploit this ancient weaponry, created by a long-dead race called the Jain.

This includes activating a Jain super-soldier, which may breach even Orlandine's defences. Meanwhile, humanity and the alien prador empire also watch this sector of space, as neither can allow the other to claim its power. However, things are about to change. The Jain might not be as dead as they seemed and interstellar war is just a heartbeat away.

The Soldier is the first novel in the Rise of the Jain series, by bestselling science fiction author Neal Asher.

The Caves of Steel
Rating: 9.5

What would it feel like to be a small bug on the ground during an armed conflict between giants? After reading the latest offering in the Polity Universe, set well after the timeline of most of his latest works, I have some idea. As you browse through this story, you get drawn into the battle between entities that border on being considered gods. Being of such a power that the very fabric of the universe becomes a tool to be used in battle by them, weapons with energy scales that would dwarf the output of an average star, where even black holes become simple parts in engines of such energies as would shatter a world.

Having been strongly taken by the tales set on Spatterjay - that enigmatic world of near-invulnerable sea captains, giant leeches, shellfish with homicidal tendancies, and tourists of a most unusual historical figure - I was overjoyed to see a couple of Hoopers playing major roles in the unfolding drama. Seeing how they cope in battles with titans, how they fare as spacegoers, and learning yet more morsels about their past, gave me quite a thrill. While I regret the time-setting of this tale precludes the appearance of many of my favourite characters - organic, mechanical and in between - I was delighted by the development afforded others who appealed to me in their previous appearances, such as Orlandine. If ever a character was ideally suited to a starring role in a tale about the (re)rise of the Jain, Orlandine is the one. Her experience with Jain tech in the past, and her accomplishments with it, make her the ideal candidate for some serious plot-twists to come in the next books.

Dragon of course is another, with its entire reason for being focussed solely on eliminating the Jain threat in the long-run... which allows a lot of wiggle-room in the short term and makes me wonder if Dragon is somehow detached from linear time - some of the long-term plans pay off in a manner that would warp the mind of anyone less than a genius. How Asher comes up with these plots amazes me only slightly less than the magical way he weaves his ideas into paper. Having once dabbled in the literary arenas once long ago, I know how incredible the workload must be to pull off yet another enthralling and engrosing story. That he stretches his stories out into a solid trilogy yet keeps it al so tight and free from pointless padding to get the word-count up, is simply impressive. (Having followed his writing updates on social media for many years, I know that these books could have been even larger, or the triple turned into a pentuple without significant effort. It's great to see Neal talking about how the 'trimmings' are often tidied up, sorted through, and assembled into novellas or short-stories.

At nearly 450 pages in the Trade Paperback edition, this is not the biggest book Neal has written, but it is also far from the smallest. One of the things that most draws me to Neal Asher's work is that the level of detail is just spot on. Even with the most arcane, obscure tech or creature detail, Neal manages to give you just enough to satisfy, but not so much as to get bogged down in the nitty-gritty at the expense of plot flow. This is, for me, the epitome of a well-crafted story, in a well-defined universe. Textbook Asher stuff, really.

As the first book in the trilogy, the role of this book should be to set the scene - expose the state of the universe as it starts, define characters, roles and primary interactions and areas of influence, then start to unroll the script a bit and get the story rolling. Neal turns this idea aside, and simply throws you, as the reader, into the middle of the storm and says "Right, figure it out before you hit the ground..." which means that this first book is a rollercoaster in its own right. We meet such gems as The Clade - a swarm AI with ZERO feet splashing in the Sanity Pool, The Soldier - a remarkable entity of awesome power, brought into play by sheer human stupidity, and a return of Angel - the now-isolated avatar of the renegade, insane and now dead AI, Erebus. We also get a great look at a subculture of humanity I found remarkable - the Cyberat, a sub-culture of self-enhanced individuals that employ cybernetic body modification to a very high degree without going into the Haiman range.

Overall, a stunning story that grabs the reader at the outset and doesn't let go. There is so much more I want to say about this book, but to avoid wrapping everything in 'spoiler' tags I'll wrap it up. In the sort of sci-fi trilogies I have come to expect from Neal, the first book is usually the quiet one of the group... which has me on the edge of my seat for Book 2! Neal has previously secured his place as my #1 living author, and this book has served to reaffirm that the throne is his.

Score: 9.8
Product reviews for listing 8556: The Republic of Birds -  Written by Jessica Miller

Olga loves the stories of the old cartographers and pores over their ancient books and maps, trying to unlock their secrets. Sometimes, she can even feel through the mapsâ"almost see into them â" as if by magic.

When the bird army kidnaps Olgaâ ™s sister, Mira, Olga knows that only she can venture into the Republic of Birds to rescue her. But first, she must unlock her magical ability.