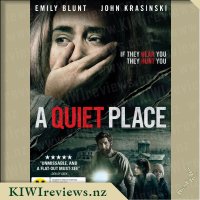 Disclosure StatementFULL DISCLOSURE: A number of units of this product have, at some time, been supplied to KIWIreviews by the company for the purposes of unbiased, independent reviews. No fee was accepted by KIWIreviews or the reviewers themselves - these are genuine, unpaid consumer reviews.
Available:
at selected retailers from July 2018

A family is forced to live in silence while hiding from creatures that hunt by sound. Parents do whatever it takes to keep their children and soon to be newborn safe in a world full of creatures hunting every sound they can hear. Not a sound can be heard from the family hiding in silence, but all it takes is one noise and everything can go wrong.

DVD Special Features:
Creating the Quiet - Director John Krasinski gives you a behind the scenes look at A Quiet Place. 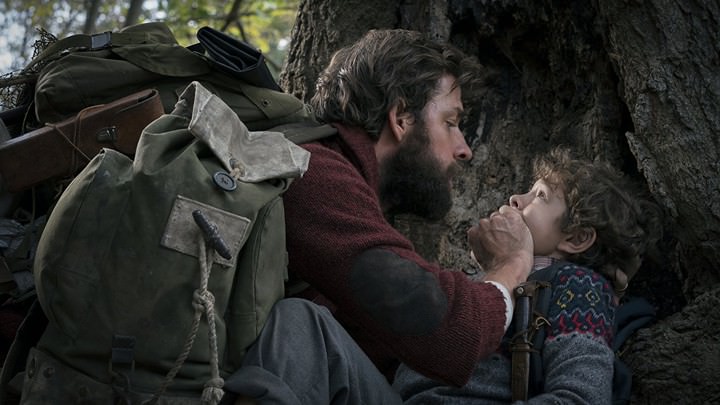 A Quiet Place has an interesting concept; a breed of creature that has brilliant hearing and hunts based on sound. It creates such a different vibe for a movie, where everything is dialled down. The general volume and action involved is reduced due to this. Instead of large noises causing jump scares, you end up with your heart racing with every little noise as you wait for a possible attack. Every noise has that delay and suspense as you wait to find out whether the creatures have heard it.

The exact range and strength of the creatures hearing is never properly established, and that vagueness adds to the tension and suspense. Despite the knowledge that you can hide noises with larger noises, there is no known parameters that explain what will result in your death or not.

To have a film that takes noise to such extremes that the characters must learn sign language in order to survive. To have this family only survive as long as they have because they have a deaf daughter and knew sign language beforehand, it is well written. Little to no verbal communication, there is so much more emphasis on actions and emotive eyes, having to act without the dialogue being the focus (Don't worry there are subtitles to translate the sign language). The subtitles do mean that you need to pay proper attention to the movie otherwise you may miss vital information.

The creatures themselves are typical CGI monstrosities. Clearly, the weakest part of the film visually, but their presence in the film is largely minimal. With a sequel already in the works, there is a definite probability that the creatures larger presence will be detrimental to the success of the film. But as far as this first film goes, it is well balanced. A simple story, that has no real "save the world" story line; just a simple "keep the children safe" story. The CGI-ness combined with their added presence in the latter parts of the film actually does take away from the fear. You fear a monster that you don't understand and that you can't see or fight against. But it's fair that you can't have a creature that isn't beatable or escapable or what is the point of the film?

Casting-wise, there is a definite chemistry between Emily Blunt and John Krasinski's characters Evelyn and Lee Abbott. This is of course helped by the fact that Blunt and Krasinski are married in real life. Children Millie Simmonds and Noah Jupe who play the couples children also have a great relationship on film, and you can see that they care about each other like a brother and sister ultimately do. There is a separation between the parents and the children, however, and while it may be necessary for the story to progress as it does, it does give the feeling that Krasinski has emotionally detached himself from his children, instead focusing his efforts on his wife. It takes a bit away from the climax of the film, and could have been written better.

But overall the film is fresh, and provides some new ideas to the horror genre. When you look at the film without the monsters, there is an idyllic family situation. Playing games together, managing a farm, growing their own food, running errands together; a tightly knit family unit. A unit that you don't want to see ripped apart.

Get ready for the uncut, lewderer, cruderer and ruderer comedy treat of the year - Keith Lemon: The Film.

The best person on telly hits the big screen in this story of rags to riches.... and fit birds like Kelly Brook. In this outrageous and hilarious adventure, Keith Lemon comes to London from Leeds and, just like his hero Richard Branson, becomes an overnight billionaire! Then, over one day, loses it all - before finding the road to redemption.