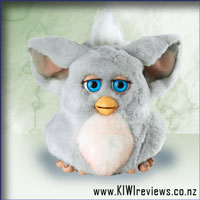 Disclosure StatementFULL DISCLOSURE: A number of units of this product have, at some time, been supplied to KIWIreviews by the company for the purposes of unbiased, independent reviews. No fee was accepted by KIWIreviews or the reviewers themselves - these are genuine, unpaid consumer reviews.
Available:
at Quality Toy and Electronic Retailers

Hasbro's new generation FURBY has been created by robotics experts from toy laboratories in America and children from New Zealand's own Kiokio Primary School in Otorohonga.

From America, the plush interactive toy has the latest EMOTO-TRONICS technology - a combination of advanced robotic technology, puppetry and realistic life-like reactions and movements. And courtesy of the children of Otorohonga, FURBY has the ability to understand our Kiwi accent.

Back in February, a group of children from Kiokio Primary were asked to participate in a series of special recordings of common phrases. These recordings were then incorporated into the programming of the FURBY chip by a language laboratory in the United States. The evolved FURBY features a wide range of emotions and motions, advanced voice recognition, and an impressive "bilingual" vocabulary of "Furbish" and English.

Approximately 50 children and 10 adults took part in the voice recordings which included common phrases such as "Tell me a joke", "Are you hungry?" and "Do you want to play?". All the phrases were repeated by each speaker two to three times and all-in-all a total of more than 100 phrases with New Zealand accents were used in the programming of FURBY.

The new FURBY is also larger than the last version, and comes with a fully flexible beak, expressive eyes, movable ears and eyebrows that allow the toy to really communicate with children. And, to ensure he remains popular with parents, the new FURBY will go to sleep when instructed and also has an off switch so the toy won't break into song or story-telling mode during the middle of the night.

Furby comes in a range of fur and eye colours. Colours may vary from that shown.

Your Baby Can Read
Rating: 9.0

When this cute little creature arrived at my place my wife immediately opened the box, got it all setup and then spent the next 4 hours talking to it. Luckily for her the kids weren't home yet so she could spend some time with it by herself before the boys claimed it for themselves.

This cute little critter is simply a very intuitive and remarkable toy, and it's ability to learn is remarkable, within a couple of hours of talking to it would spend most of the time talking to you in english instead of it's native furbish. Although i have noticed it does have some trouble identifying more than two different voices, and even then it can get coufused and break out into a joke when you have asked it to sing you a song. Also background noise needs to be kept to a minimum (nearly impossible in our household) otherwise Furby can start to get really confused and need to be reset again. Luckily the manufacturers thought of this and programed in a reset function which enables you to wipe all the Furby's learning and reset it back to factory new.

This is a great gift for the kids as long as you don't mind the fact that your kids are talking to their toys, which are actually answering back!

What can be said about the Furby that hasn't been already said by others more verbose tham me?
Granted it is cute and fun and can hold adults captivated for hours, it is sure to hold any child captivated for weeks, months, years even.

The Furby itself is the most advanced that the company has ever produced, and the description above says it all. Had it not said about the advanced robotics, I would never have looked it up to find out more of the inner workings of Furby, though seeing the little chap in action, one can easily see that a huge amount of work has gone into designing, manufacturing and programming Furby - even down to the language (which as Kiwis will know, made the evening news when recordings were taken from children at the primary school.

Furby has many pre-programmed functions which can be activated by saying 'Hey Furby'. Jokes, songs, dancing, stories and more are in its repertory. The Furby can learn language and children (god forbid that they really do) can learn Furbish, the Furby language. I really do not want to have my daughter's requests addressed to me in Furbish!

The 'Care Guide' is easily read and self explanatory, and includes an English-Furbish dictionary for one to refer to.

This toy will be on many a child's wish list for christmas and will provide many, many hours of entertainment, not just over christmas, but over the months and years to come. I love it and I am sure I could have fun with it, but I know my daughter will be reluctant to put it down even for a short time. This toy will be the big winner this christmas. I am sure of it.

NOTE: Last 10% of solution will not reach wand. You will need to gently tip bottle over BEFORE removing the cap to soak the wand.