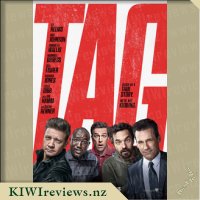 Disclosure StatementFULL DISCLOSURE: A number of units of this product have, at some time, been supplied to KIWIreviews by the company for the purposes of unbiased, independent reviews. No fee was accepted by KIWIreviews or the reviewers themselves - these are genuine, unpaid consumer reviews.
Available:
in cinemas 14th June 2018

TAG is the movie that I didn't know that I needed to see. I never knew it was being made, I didn't know it was coming out this week. I didn't even know the real-life story that it was based on. It caught me unawares, and because of that, the unpredictable nature of this film really got legitimate laugh-out-loud moments from me. Not the usual "exhaling through the nose faster than normal" laugh. A full on cackle, with complete disregard for anybody else in the cinema. And for that alone, I must recommend this film.

But I assume that may not be enough for you non-believers, so let's look at the cast. Jeremy Renner (Hawkeye from the MCU franchise), Ed Helms (Andy Bernard from US version of 'The Office'), Jake Johnson (Nick Miller from 'New Girl'), Hannibal Buress (Licoln Rice of 'Broad city'), Annabelle Wallis (Grace Burgess/Shelby from 'Peaky Blinders'), Rashida Jones (Ann Perkins of 'Parks and Recreation'), Isla Fisher (Rebel Alley from 'Arrested Development'), Leslie Bibb (Casey from 'The Odd Couple'), Jon Hamm (Don Draper from 'Mad Men'). These are some well-established actors and actresses in the comedy and drama sectors, and (with the exception of Jeremy Renner) they pull off the enthusiasm and passion of their roles with ease and create an authentic feeling. Each character has that one or two defining points that help you differentiate them, because in reality, who they are is irrelevant. What matters is the game, and the significance of the game is portrayed exceptionally well. Jeremy Renner pulls off the action in the film very well, but the quality of his work actually ends up making him less realistic a character. No matter how good he is at what he does, it comes across more professional than real.

Movies have been moving away from the classy pre-Daniel Craig James Bond fight scenes, towards the more technical and analytical action styles of Kingsman, Transporter, and Sherlock Holmes. I mention fight scenes, as despite this very much being a comedy film about a group of friends, we all know that when games start getting competitive, all bets are off. It's this extreme response with over-the-top plans for a child's game that gives this film the hilarity that it has.

The premise is so simple; a game of tag, with a few rules in place, but the idea of carrying it on as an adult, using everything that is now available as an adult, and potentially 11 months out of the year to go into planning...brilliant. Decoys, distractions, traps, misdirection, blockers, and psychological warfare are all on the cards. What is real and what is a con is forever being questioned. The second half of the film does take a bit of a turn, from the free-for-all fun into serious drama, but it all serves the purpose of the film. Female and male characters alike are all strong characters (excluding Annabelle Wallis' character who has very little relevance to the plot), and the drama portions of the film are executed very convincingly.

It combines the analytical slow-motion fight scenes of a Robert Downey Jr Sherlock Holmes movie, with the hilarious antics of The Hangover and American Pie, without needing to introduce illicit drugs, alcohol, or sex as a plot device. Granted, there is some marijuana and alcohol in the film, but they aren't present to drive the plot. The film does take the time to flesh out the characters slightly, touching on such notions as divorce, jealous and therapy, alcoholism and rehab, which while does little for the film, it grounds the characters personalities and makes them easier to empathise with, and also helps with the general need to normalise rehab and therapy in the real world.

Despite some adult themes, I found the TAG to be a rather wholesome film, that has some great tips and ideas on strengthening long-lasting friendships. Loved it.

There are heroes. There are superheroes. And then there'sâ¦ HANCOCK.

With great power comes great responsibility - everyone knows that. Everyone, that is, except Hancock. Edgy, conflicted, sarcastic and misunderstood, Hancock's well-intentioned heroics might get the job done and save countless lives, but always seem to leave jaw-dropping damage in their wake.