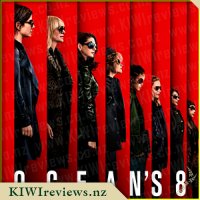 Disclosure StatementFULL DISCLOSURE: A number of units of this product have, at some time, been supplied to KIWIreviews by the company for the purposes of unbiased, independent reviews. No fee was accepted by KIWIreviews or the reviewers themselves - these are genuine, unpaid consumer reviews.
Available:
in cinemas 7th of June 2018

Five years, eight months, 12 days and counting -- that's how long Debbie Ocean has been devising the biggest heist of her life. She knows what it's going to take -- a team of the best people in the field, starting with her partner-in-crime Lou Miller. Together, they recruit a crew of specialists, including jeweler Amita, street con Constance, suburban mom Tammy, hacker Nine Ball, and fashion designer Rose. Their target -- a necklace that's worth more than $150 million.

Ocean's 8 is the spin off of the Ocean's franchise. Not a prequel or a direct sequel, but it does take place after Ocean's 13. Following in the footsteps of Ghostbusters, we have another attempt at remaking a popular Hollywood film with an all-female cast. Because of this extreme swing (in terms of pretty much swinging the lack of gender diversity 100% in the other direction), and the minimal presence of connections with the previous trilogy, I was unsure how successful the film would be. Ultimately, however, the success of a film comes down to the writing and directing.

Ocean's 8 does struggle in this way. An effective Ocean's film involves a team of people who all have their own expertise that are necessary to pull off the heist. This is a portion of the film that is given very little dedicated time, and in the end the heist feels like it could have actually been pulled off by a fraction of the people involved. Coming off like a Sandra Bullock movie, the remaining cast seem like minor set pieces in comparison. Even Anne Hathaway and Helena Bonham-Carter, just aren't fully utilised.

As far as plot goes, the storyline is very predictable, in fact, if you pay attention to the value of the target necklace and their payouts, the "twist" is incredibly obvious and the film suffers because of it. I enjoy these actresses in the other places I've seen them, but they feel wasted and under-utilised in this film. I want them to succeed, and I want the film to be engaging, but it feels like actresses pretending to be a character. Perhaps that is just an issue of using such well-known actresses, but I really struggled to see them as genuine people and not fictional characters.

With very few obstacles to overcome, the heist is not portrayed as something that would actually be challenging, with all concerns being discovered and dealt with before the heist occurs. It leads to a rather unexciting heist, as it removes all of the factors that lead to suspense and tension.

It is entertaining, I'll give it that. It isn't boring by any stretch of the imagination, but it falls below my expectations of an Ocean's franchise film (and for those looking to be excited at the girl power succeeding, they will be disappointed who was involved in the twist). It's a popcorn flick. Something to sit back and watch, without letting the brain work too hard, because it will start poking holes in the plot. Fun but not deep.