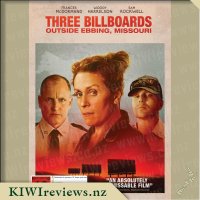 Frances McDormand delivers a stunningly powerful performance as Mildred Hayes in this darkly comic drama that has been hailed as one of the year's best films. After months have passed without an arrest in her daughter's murder case, Mildred makes a bold move, painting three signs leading into her town with a controversial message directed at William Willoughby (Woody Harrelson), the town's revered chief of police. When his second-in-command Officer Dixon (Sam Rockwell), an immature young man with a penchant for violence, gets involved, the battle between Mildred and Ebbing's law enforcement is only exacerbated.

Also included on the DVD is the McDonagh's award-winning short film Six Shooter.

I had heard a lot of hype about this movie, so I was delighted to be able to review it. Certainly, it was not what I had expected; I went in with an open mind, but soon realised I was in for a challenge. This was to be no chick flick (as someone had suggested it might be). It is certainly about a stroppy woman who will do anything to track down her daughter's killer, but this is no glamorous siren with a designer pistol in her handbag. This is a rough talking, in-your-face confrontational fighter who is not going to back down, no matter what the opposition. And she is prepared to break the law to get answers.

Harrelson and Rockwell are both superb in their roles as, respectively, the empathetic (if flawed) chief of police and the obnoxious racist cop. I found Harrelson completely believable, Rockwell less so as it is hard to imagine that anyone can be quite that rotten. His character development does not really work, especially towards the end of the movie. However, both actors offer a great foil (if in opposite ways) to McDormand's single-minded pursuit of justice.

I was disappointed however that two other characters, both with so much to offer, were under-used in the movie. Clarke Peters as the second police chief erupted into the police station with a roar, sorting out Dixon (almost certainly to the audience's great satisfaction) but his role seemed to fizzle out after that. There was the potential to make a much stronger statement against racism since the earlier part of the movie had been concerned with highlighting inequities in general.

The other character who was not used to potential was Peter Dinklage as James. Again, his character was never developed beyond the obvious: he was a dwarf, ergo that was funny. Say what? In the context of the movie that did not make sense, and in some ways his part could have been cut altogether. Peter Dinklage was a drawcard for me; I knew he was in the movie and that he is a fine actor, so I expected to see more of him in scenes that supported his talent rather than sidelining it.

So, if some of the actors are underused, and the story meanders along without any real conclusion, and the dialogue is rough in the extreme, what is the purpose of the movie? I thought about this after seeing it for the first time, and then watched it twice more while I formed my own conclusion. It is enjoyable, it has funny moments, it has characters you either love or hate - but it is never boring. One after another, it highlights social issues and throws them at the viewer to evoke a reaction. And those issues are those that affect people most. Social inequity - murder - revenge - racism - sexism - disability - violence - suicide - all problems that can have a devastating effect on people and incite them to take action, sometimes drastic.

That reaction which the viewers experience vicariously is what shifts the movie from entertainment to inspiration. In effect, the on-screen actions provoke a response. You cannot go to this movie and just sit and watch it. All the way through you are responding to what is unfolding on the screen, and what is more, you are prompted to think about it, to evaluate. The viewer is constantly forced to put himself in the place of the actor, asking himself what he would do in the same circumstance. The director makes no judgements, offers no pat solutions. He has simply presented the material and left it to each viewer to take what he wishes from the experience.

Brad Pitt and Angelina Jolie smolder in this sizzling action film from the director of The Bourne Identity.

After five (or six) years of vanilla-wedded bliss, ordinary suburbanites John and Jane Smith are stuck in a rut the size of the Grand Canyon--until the truth comes out! Unbeknownst to each other, they are both coolly lethal, ... more...