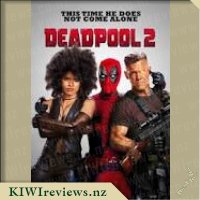 Wisecracking mercenary Deadpool joins forces with three mutants - Bedlam, Shatterstar and Domino - to protect a boy from the all-powerful Cable.

Deadpool was a breath of fresh air to the Marvel franchise and exceeded all my expectations when I first watched it. I loved the humour, the action, the plot, characters and general uniqueness so I had high expectations for Deadpool 2.

Deadpool 1 had the shock factor of a tongue in check Marvel character but in this movie that's already gone so something more was needed. We get more supporting characters in Deadpool 2 and I thought Zazie Beets did a brilliant job as lucky Domino. Watching the things around her collapse or move around in her favour was very clever and visually pleasing. Josh Brolin was fabulous as time traveling Cable and his character was an excellent counterbalance to the chatterbox Deadpool. There are also a few surprise 'blink and you'll miss them' cameo's that are funny! New Zealander Julian Dennison is perfectly cast as the alienated and rebellious Russell/ Firefist. I did laugh when he tried to spread some body positive messages by making a big deal about being a 'plus size' super hero!

Deadpool 2 is definitely bigger, louder and faster than Deadpool 1! There are some spectacularly crazy CG action scenes with lots of blood, violence and slow motion sequences thrown in. The soundtrack was fabulous with an unexpected mix of songs which I found myself singing along to. The humour is non stop and very similar to the first film with lots of pop culture references. Some of the jokes were recycled and weren't that funny and one scene towards the end was dragged out so much I actually found it painful to watch. The story-line is a little disjointed and raises plenty of questions that don't get answered but ultimately, Deadpool 2 does promote teamwork, collaboration, empathy and believing that people, particularly children, can change.

Unfortunately, although I really enjoyed Deadpool 2, like many a sequel, it didn't quite match it's predecessor. Some of the jokes were unnecessary and childish to the point of not being funny. It's a highly entertaining movie and if you enjoyed Deadpool, you'll enjoy it's sequel, just expect to see more of the same. As a side note, watch until the very end for one of the most entertaining post credits scene!

It's safe to say that Deadpool 2 has had the same problem. While there are some stark differences, between the original and the sequel, the comedic gold that was unexpected and fresh in the in Deadpool, became tired and overused in Deadpool 2.

Differences came in the form of more action, perhaps due to the loss of director Tim Miller and his replacement David Leitch. Leitch is probably best known for his work on the action-packed John Wick franchise. Unlike the Deadpool predecessor, which focused more on comedy, the sequel was much more action-oriented, to the point that it really lost a lot of the Deadpool vibe that had been created in the first film. What comedic elements that remained in the film's second installment was largely reused material, in the form of jokes around Wilson's appearance, his inconsistent ability to regrow limbs, and over-the-top homoeroticism.

This was exacerbated by the ratio of Wade Wilson to Deadpool, with the anti-hero spending much of the film out of his uniform. Clear attempts to humanize Wilson's character to make his creation of the X-Force seem less unusual for the "lone wolf" that Deadpool usually is. The entire mood of the film was dark and peculiar, with the protagonist effectively wanting to end his life throughout the entire film, but then reveling in helping others and meeting new people; the two factors clashed significantly.

The change in Deapool's preference for working alone, to wanting to form a team, led to an expanding of the cast, which was largely unspectacular. With the exception of Domino. Visually, looking the complete opposite of her comic counterpart, Zazie Beets does brilliant job bringing Domino to life; with a great positive, upbeat vibe that perfectly fits with her "luck" abilities.

Josh Brolin does well as Cable, though his character comes across as rather one-dimensional. He looks the part, though some may argue he looks less imposing compared to his own comic counterpart, but it added some material to the comedy side of things (which was unfortunately already "old" as the jokes had already been used in the trailers beforehand).

Morena Baccarin is still absolutely gorgeous, and while her role in the film is necessary to the plot, her presence was minimal, and I'd really love to see more of her in the next film (if they make a Deadpool 3). TJ Miller on the other hand didn't need to be in the film at all, and served little to no purpose, in terms of moving the plot forward, or providing comedic value.

The story line felt lacking. Despite some brilliant action scenes in the "convoy" scene, the plot felt again regurgitated with a heavy "Terminator" influence, and some very lazy writing, which while sometimes was joked about by the fourth-wall-breaking antihero, was far more present than the viewer would initially believe. Pay attention to Cables actions throughout the film, and you quickly find many plot holes, where the story moves along for the sake of convenience alone.

Is it an entertaining film though? It certainly is. The action is well choreographed, and there are some great examples of teamwork in the fighting styles used. The comedy however failed to strike as often as it did in it's predecessor, and as a result becomes like every other superhero movie, when the appeal of Deadpool, is his antihero status and his inability to adhere to moulds. Ryan Reynolds has secured his position as Deadpool, and is at the point where no other actor could do the role justice, but they really need to refocus on what makes Deadpool great.

The convoy sequence along with any other part involving Domino, makes this a film worth watching. Entertaining, but another case of sequel-itis.

My husband has been collecting comic books for a zillion years so as soon as one comes out he is usually frothing at the mouth dying to see them. I usually find them to talk heavy, action all over the place and I find in the majority of the movies, I seem to become restless by the end. There has of course been some exceptions to this like with the first Iron Man, the first Xmen and ummm yeah that is about it. Maybe because they were new and exciting and brought an element of magic to the world (I have yet to find a DC movie that I enjoy). I actually was not that impressed by the first Deadpool and found Ryan's voice was grating on me by the end, it was watchable but I did not rave about it like the rest of the world seemed to. So it is fair to say I was not holding much hope for this movie.

Very rare do you go to a movie and the whole cinema is silent besides the laughter and as this takes a lot of shots at various things/peoples/events it had people laughing at various things and then on occasions the whole theater would roar at the same thing. Like the opening credits had me in hysterics especially when one of the big wigs was named as 'the man who killed John Wicks dog' and seriously the laughs just kept coming. I love movies where they do not take anything serious and nothing is off limits. I especially loved all the pot shots at the DC World (Martha 2) but that is not to say Wolverine was safe. Where as Deadpool/Wade kept saying it was sloppy writing I thought it was gold.

I had tears rolling down my eyes at one part as without saying anything (although I am dying to) it is the most epic group of superheros ever until it is not and then his legs oh my did I cry. This is the first Marvel movie that I am dying to see again it is that good. I will say there was a small window at the beginning of the film where I did think 'why did I come to this' but that disappeared so fast especially when Dolly Parton's 'Nine to Five' came on as he went on a killing spree.

There is of course naughty words, violence, adult references but it is all done so well that it just goes over your head. The soundtrack was amazing and the girl sitting next to me would start singing well truth be told so did I on occasions. It was missing the Stan Lee cameo and at the end as all Marvel watchers know you have to watch the credits but I can let you know once Deadpool does "some travel" nothing else happens. It still has the feeling of a really big budget and the special effects came out to play.

The actors were fantastic and if you read the list of people in it you will notice Brad Pitts name, it is not an error but you only see him for a second and then he vanishes (you will get the reference). Julian done New Zealand proud and our country is mentioned which was met by very loud applause in the theater (I was at the premier with his family being present). Really this movie is awesome and if you are only going to watch one Marvel movie this would be it. It makes me so excited to watch the next one.

He has sworn to defend humanity yet he is not entirely human. He possesses the superhuman strength of vampires yet he fights for their annihilation. He is Blade, an immortal warrior born with powers greater than any man or vampire, and he has just one mission: to destroy an army of vampires preying on the human race. Blade is out to eliminate the blood thirsty killers for good, but first he must eliminate their omnipotent overlord, Deacon Frost. ... more...