« Nightflyers and other stories review 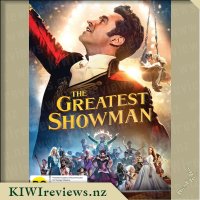 Hugh Jackman leads an all-star cast in this bold and original musical filled with infectious showstopping performances that will bring you to your feet time and time again. Inspired by the story of P.T. Barnum (Jackman) and celebrating the birth of show business, the film follows the visionary who rose from nothing to create a mesmerizing spectacle. This inspirational films also stars Zac Efron, Michelle Williams, Rebecca Ferguson and Zendaya.

The greatest Showman is a stylized version of the life of P.T. Barnum and based loosely on his life and rise to become a name synonymous with the circus. The film follows PT as a young man helping his tailor father, as he then grows living on the streets before whisking away the love of his life from her rich, overbearing father. He and Charity then settle, have a couple of kids and then when jobless, PT begins his idea of what will become a circus. This is all very loosely based on reality, as Charity had four children with him, wasn't a rich kid, Jenny Lind didn't make a move on Barnum and they parted amicably and not all of the people who joined the circus coincided. But artistic license is rife in Hollywood and it wouldn't be anywhere near as good a film if they stuck to accuracy.

The story itself is formulaic, boy has almost nothing to his name, boy falls for girl, boy and girl start a family and overcome all obstacles to end up happily ever after. There is a secondary love story going on which is sweet, again, formulaic but still enjoyable. I already knew "This is Me" because everyone was singing it before the film even came out, good marketing... There are a couple of songs which start off a bit too quiet, even now listening to the soundtrack at home I have to turn the volume up to catch every word at the start, which is a shame and takes away from the enjoyment of the songs. Beyond that the songs are fun and catchy and very well written, my kids and I enjoy the entire soundtrack.

The acting is well done, everyone is believable and though they don't have the conditions their real-life counterparts do (even Sam Humphrey is taller than Tom Thumb in real life) the pain and rejection their characters have lived through feels real (especially as there are still plenty of people who feel like outsiders today, because of whatever condition they may have or were born with). The costumes, particularly when worn on the circus floor, are stunning. So if you want a film accurate to history, then you won't enjoy this, but if you go into it expecting good acting, great costumes and even better musical numbers then step right up.

I was looking forward to seeing this movie as I was familiar with the story of P.T. Barnum (Hugh Jackman) already. Although I expected there to be some artistic licence, I was interested to see what take the director would have on the story. I was relieved to see that it did not stray too far from reality (although I was intrigued to see how Jenny Lind (Rebecca Ferguson) was presented as markedly less empathetic than she had been in real life - and there was never any evidence to suggest that she was remotely interested in Barnum!)

My initial impression of the movie was the introductory menu on the CD. The repetitive, aggressive sequence which persisted until I actually hit the play button was nothing short of painful. Even when the movie started, the sequence continued - changing key in the process, confusing and annoying me even more. Then it became apparent that one of the "instruments" was really a voice, but so muted that the words could not be made out - even by my cousin who has amazing hearing. As the film (and the song) moved on, the words gradually became audible. But we were left wondering whether the sound mixing was faulty or whether this was a deliberate device.

First impressions are so important to hook in a viewer, so it was a pity that this almost put us off watching the rest of the movie. Luckily the visuals were excellent: the choreography in this sequence was so good, and the sets so amazing, that we decided to give the film a chance. I am glad we did as the rest of the film was quite charming. Some of the remaining songs were catchy (although predictable in terms of both melody and rhyme - but hey, this was a musical!) and there were a couple of gems like "This Is Me".

As Barnum, Hugh Jackman is suave and eternally optimistic. Perhaps a little less brash than the original Barnum, but within the context of the movie the character works well. As his wife, Charity, Michelle Williams is the epitome of sweetness. She is well cast as his ever-supportive partner, always ready to be there for him and his children. Philip Carlyle (Zac Efron) and Anne Williams (Zendaya), were written into the script in order to provide an additional love interest and also to highlight the attitudes towards interracial relationships in those times. Unlike Barnum and his wife, these two characters never existed in real life.

Lettie Lutz (Keala Settle) was my personal favourite: I loved her voice and her character's attitude which summed up the "don't tolerate difference, don't accept it - just go ahead, be yourself and celebrate it" philosophy which is one of the themes of the movie. Barnum's first goal was to make money; he was an entrepreneur after all, out to prove a point to the world of white privilege - but in the process, he gathered a group of "freaks", people of non-white ethnicity, or with disabilities or physical anomalies, and empowered them to believe in themselves through performance. As he told Tom Thumb (Sam Humphrey) who was reluctant to perform because everyone would laugh at him, "They're laughing at you anyway so you might as well get paid!"

I did have a few qualms about the ethical issues raised by making a movie about people who did not confirm to the societal norm of the times. Barnum's original intention, to present what was then known as a "freak show", made me uncomfortable. In fact, we turned the DVD off at one stage and discussed what we thought of that aspect. However, Chang (Yusaku Komori) and Eng (Danial Son) were conjoined twins who synchronised their dance moves so that it was often difficult to tell that they were disabled at all. Lettie Lutz led several of the dance sequences; her singing and moves were so accomplished that her size and bearded face were irrelevant. The consensus was that we would reserve judgement till the end.

In effect, the big numbers were so lavish and so full of action that the main impression was one of joy and delight. The progression from static show to circus performers was a positive move for all the "freaks". They were watched for their talent rather than their differences. In this, the movie succeeded in its mission to celebrate and make the audience smile. As the story unfolded, we felt more relaxed watching it and started to enjoy the sheer exuberance of the performances.

The DVD includes a good selection of extras which are useful to provide background information to the film process. The songs are all included (with words, for those who enjoy singing along) and there are two slideshows of the storyboards and concept art. We watched the extras after watching the movie through to the end, and then I watched the movie again to make sure I had not missed anything.

Overall, I thought the film was good entertainment; my main reservations would be with the opening musical sequence. I would also like to have heard Jenny Lind sing something fitting her own abilities; I was reminded of Celine Dion rather than the diva Lind certainly was. She was a soprano with a wide operatic repertoire, so it would have been useful to include one such item in the movie. But that aside, Loren Allred (who provided the vocals for Rebecca Ferguson) and Michelle Williams were both adequate singers. However, I still think Keala Settle has the better voice!

The Greatest Showman is is rags to riches story based loosely on P.T. Barnum, an American circus showman. My 10 year old daughter had seen the trailers and heard the songs on the radio and was keen to watch this with me so we settled down to watch and have a bit of a sing-along!

The Greatest Showman is a flashy, fast-paced and uplifting film with a high feel-good factor offering a much welcome sense of escape. It features a stellar cast which caters to all age groups. Zendaya and Zac Efron have a huge tween fan base whereas Hugh Jackman offers an old-school charm. The talented and charming Jackman plays the lead character, Barnum and is definitely the star of the show with his singing, dancing and cheering smile. Michelle Williams also does a fabulous job as his long-suffering wife who shows Barnum what's really important whilst Rebecca Ferguson plays the aloof English singer, Jenny Lind to perfection.

The musical score is slick with some catchy tunes and my daughter and I found ourselves both singing along to Keala Settle's 'This is Me'. The songs were appropriate to the story and when the pace slowed down, it was usually followed by a song to pick things up.

Visually this movie is stunning with lots of incredible shots of the circus in action and various musical scenes scattered throughout various locations. The sets were spectacular with gorgeous ballrooms and fancy mansions. The period costumes were also beautiful.

The Greatest Showman isn't a challenging or perfect film, the story-line is pretty basic and the ending is predictable. There were definitely moments when my attention waned but overall, it was a fun, enjoyable family movie. My daughter gave it a resounding 10 out of 10 and although my rating isn't quite as high, it was an entertaining, feel-good film.

A reimagining of the classic horror tale about Carrie White, a shy girl outcast by her peers and sheltered by her deeply religious mother, who unleashes telekinetic terror on her small town after being pushed too far at her senior prom.