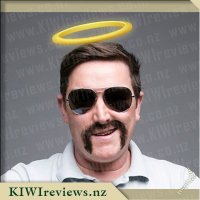 Australia's most wanted comedian is back and he's bigger than Jesus! Star of 7 Days, and Chopper's Republic of Anzakistan, Heath Franklin's Chopper brings his new show Bogan Jesus to New Zealand in May 2018.

The world has had religion ever since God was in nappies, and what have we got to show for it: wars, terrorist attacks and Christian rock. It's time religion took a hard look at itself, so Chopper is starting his own one, in his own image and giving hell to the almighty.

There is a new 'mo-ssiah' for a new age and he's holier than Oscar Pistorius' bathroom door.

Thou shalt harden up and become a Chopostle! So gather round and be healed by Bogan Jesus! 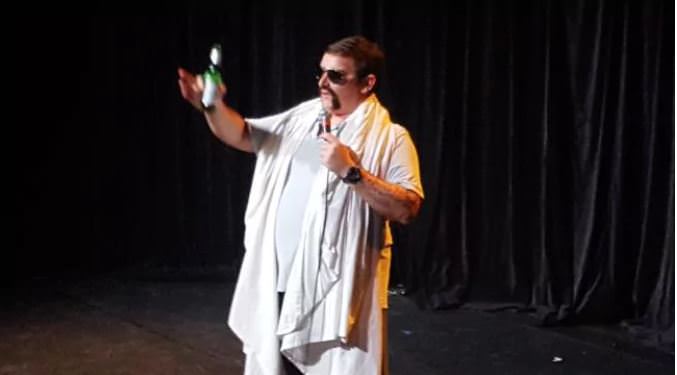 Heath Franklin has come along way since his stint on Ronnie Johns Half Hour back in 2005-2006. One of the things that came out of that show was his impersonation of the infamous Australian criminal Mark Brandon "Chopper" Read, a characterization that has since become his most commonly used comedic choice, transitioning from Chopper sketches to Chopper shows and tours. Twelve years later and Chopper is still selling out multiple shows at the International Comedy Festival.

Turning up to SKYCITY Theatre, the job ahead was not easy. Finding parking in the city proved to be very time consuming, eating up nearly an hour, and this was followed by long waits at the elevator as the 3rd-floor theatre is not accessible in that direction via the stairwell. But arriving in town an hour early, we still managed to get into the theatre with a few minutes to spare. So do be prepared to travel early.

In this case, however, the bogans were out in full force and the bar was swamped. The bell ringing alerting the patrons that the show was starting in 5 minutes, and the follow-up bell 5 minutes later, fell on deaf ears as the punters continued to wait to get served. As the house lights are switched off completely during the show, the start ended up being delayed by 15 minutes as people finally took to their seats.

Finally, the lights went out, and the announcer called Chopper out to the stage. It was just a matter of time before a member of the audience attempted to chastise Chopper for being late, to which he promptly shut them down, blaming the bogans at the bar, and showing disappointment at their audacity to attack his "professionalism"...as he drank from his bottle of VB BItter. Dressed in his usual attire (white polo shirt, jeans, jandals, and aviator glasses), Chopper added a white shawl for his new show, where he attempts to start his own religion.

Chatting to two members of the front row (Alan the trucking guy that doesn't drive trucks, and Jason the amphibious car salesman), he monologued about the decrease in the number of people following religions, and many reasons why that could be, before putting forward his own 10 commandments. Much of Chopper's appeal is that he will make fun of everybody, whether it be L. Ron Hubbard's science fiction religion, Christianity's Sunday masses that occupy peak hangover time, possible reasonings as to why Muslim's cannot eat pork, going as far as to decree a love for extreme Islamic terrorists.

His ten commandments cover a variety of topics from leafblowers, to cat cafes and Christmas carols. He talks about the zealots of non-religious groups, such as the cross-fit gym bunnies, and the vegans, and even throws a bit in at the end about transgender folk. A mishmash of topics, that increases the chance of hitting a home run, and nearly every single one proves to be a laugh-out-loud moment.

One thing that Chopper doesn't enjoy, however, is a heckler, and one woman turned out to be a sucker for punishment. Clearly a few too many wines down, she threw off his comedic timing, and in return was savagely slammed for a good 5-10 minutes. Several "shut the f**k up"s did not do the job, so he continued to mock and ridicule her to the point where you did start to feel sorry for the woman. But he relented, and the show went on, with a lacklustre ending to his joke as the comedic timing was long lost.

One does have to wonder when he created the show's content, as he pokes fun at blade-runner Oscar Pistorius, and talks about eating Stephen Hawking (RIP), but he still gets riotous laughs from the crowd as he keeps rolling out content that hits so close to home. tweaking his jokes to cater to the New Zealand audience, he talks about his hatred of Spark and wanting a dog called Dog. He gleefully mixes the pop culture and Kiwiana in with a lot of "f**kwits".

He knows what he's doing and knows the kiwi humour well. Will he be able to start his own religion? Probably not, but he at the very least might be able to cause some damage to Spark's stock prices as he tours the country..

Monster Jam monster trucks are custom-designed machines that sit atop 66-inch-tall tyres and weigh a minimum of 5 tonne. Built for short, high-powered bursts of speed, monster trucks generate 1,500 to 2,000 horsepower and are capable of speeds of up to 160 kilometres per hour. Monster trucks can fly up to 38 meters and up to 10 meters in the air. The 3.5 meter tall, 5 tonne machines will bring you to your feet, racing and ripping up a ... more...