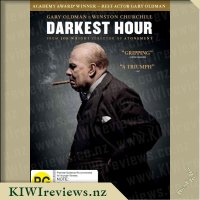 Disclosure StatementFULL DISCLOSURE: A number of units of this product have, at some time, been supplied to KIWIreviews by the company for the purposes of unbiased, independent reviews. No fee was accepted by KIWIreviews or the reviewers themselves - these are genuine, unpaid consumer reviews.
Available:
April 2018

During the early days of World War II, with the fall of France imminent, Britain faces its darkest hour as the threat of invasion looms. As the seemingly unstoppable Nazi forces advance, and with the Allied army cornered on the beaches of Dunkirk, the fate of Western Europe hangs on the leadership of the newly-appointed British Prime Minister Winston Churchill (Academy Award nominee Gary Oldman). While maneuvering his political rivals, he must confront the ultimate choice: negotiate with Hitler and save the British people at a terrible cost or rally the nation and fight on against incredible odds.

Directed by Joe Wright, DARKEST HOUR is the dramatic and inspiring story of four weeks in 1940 during which Churchill's courage to lead changed the course of world history.

I approached this film with curiosity as I have always had a mixed view of Churchill. He was a complex character who embodied so many facets of effective leadership, some of which were positive and others not so pleasant. It is true that, while leading and inspiring his own countrymen to fight for victory, he also ignored the needs of others and in the process was seen by many as guilty of dismissing some of the wartime atrocities in other countries as low priority. However, this movie concentrates on the first few weeks of his leadership so is concerned primarily with his struggle for initial support from his fellow MPs and his determination to stand firm against Hitler's challenge.

The figure of Churchill (Gary Oldman) is presented through a combination of stunning prosthetics (designed by the very talented Kazuhiro Tsuji) and the body language of Oldman himself, who studied Churchill's mannerisms and gait to the point that he effectively becomes Churchill. The cigar, the way he wears his costume, the glasses, even the way he cocks his head, all are pure Churchill. It is all about the illusion - the viewer sees the Churchill pointers, and the slight disparities between the historical figure and the actor cease to matter. This is no romantic portrayal: Churchill comes across warts and all as pushy, grumpy, intolerant, single-minded, driven - which serve to make Oldman's performance even more credible.

The supporting actors offer equally skilled performances. Kristin Scott Thomas, as Churchill's wife Clementine, is ideally cast as the one person who really has a handle on her husband's often rough treatment of other people and is able to steer him to more appropriate actions; this diplomatic approach is vital to his success as a politician. While Oldman's Churchill can be boorish and downright unattractive, she is always positive and perfectly presented without being over-dressed. Similarly, Lily James as Elizabeth Layton has the perfect balance between youthful enthusiasm, loyalty and annoyance: her facial expressions are a treat to watch as Churchill reprimands her yet again for not doing exactly what he wants at that moment - even if it would mean she had to be a mind-reader.

The plot is easy to follow even for someone who might not be familiar with this period in history. In fact, the storyline is fairly straightforward: politician who is unpopular becomes Prime Minister because at that moment in time he is the person best suited to the job, and achieves his aim of committing the United Kingdom to remain steadfast in its decision to protect itself at all costs against the threat of the enemy. Some of the events in the movie are fictitious (like the scene where Churchill travels on the London Underground) but are based on a broader interpretation of what might really have happened.

One effective technique that struck me especially is the way in which director Joe Wright has used panning when presenting some of the street scenes. This enables the camera to use slow motion as a way to show the British public, establishing both the social and the physical background of wartime London. A second very effective technique is the zooming out and morphing during battle scenes. And finally, the use of humour throughout the film provides some light relief in what could otherwise be a ponderous account. I especially laughed at the idea of Churchill's mini-office in his toilet, his reaction when he is told he has reversed the victory sign, and his abysmal attempts to communicate in French!

Finally, the big question once I had watched the movie through. At the end of the day, does the film title refer to Britain's darkest hour or Churchill's own? Maybe it is both! 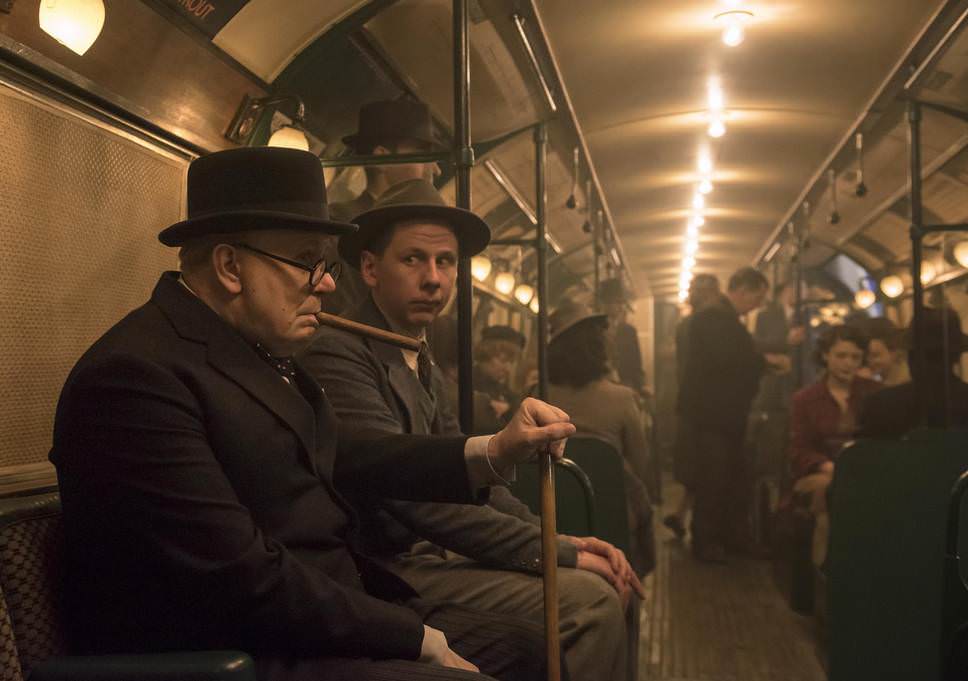 Winston Churchill is a very big name historically. Known for being the Prime Minister of Britain during the Second World War, and being the driving force of the allies victory over Hitler. While my knowledge of the political going-on during that period is very minimal, I did know that Churchill was a contentious choice as leader, who was promptly removed from office at the end of the war. It's little snippets of information like that that get the curiosity going, and piques potential viewer's interest. Hollywood would have us believe that the wars are only won on the battlefields, but war is a multi-faceted problem that requires political support as well as troop support. This is the story of Churchill's battle against his own country.

Neville Chamberlain was losing a war and in turn lost the support of the parliament. With his resignation demanded, his replacement needed to have the support of both the Labour Party and the Conservatives, and due to that fact alone, Churchill is brought into the mix. The film follows Churchill, as he attempts to juggle winning a war when his own War Cabinet members are conspiring against him, maintain peace on the mainland while still keeping their support, and showing a strong hand when every other political body is crumbling under the Nazi onslaught.

Cast as Churchill is Gary Oldman. With the exception of his eyes, Oldman is near unrecognisable as he loses his hair and gains the extra age and rolls necessary to look the part (obviously, this has all been done with prosthetics) While Oldman does not look like Churchill, he has a number of similar features that combine with his own features to create a Churchill/Oldman hybrid.

Darkest Hour has rather a peculiar pacing, with many of the parts that I found interesting, quickly skipped over, while the more dense, but uninteresting pieces got all the attention. Much of the narrative flow was lost by feeding too much of the background material for the supporting cast, effectively stalling the movie at certain points, there were multiple scenes with Halifax and Chamberlain and others with King George VI or Churchill's secretary that were unnecessary to the movement and understanding of the plot. Oldman's Churchill was the only character in this one-sided feature film that was holding it together. From quotes to mannerisms, Oldman pulled off a very good Churchill.

The "Underground" scene is a particular favourite, with a change of scenery and a script that allows Oldman to shine, it provides another dimension to the character beyond being cranky, and stubborn. As far as plots go, this is not all there. With no action and not focusing too much on the supporting characters, we ended up with a very thin film that struggles to stand on its own merits. Similar to Rogue One of the Star Wars franchise, Darkest Hour provides context and tries to elaborate on smaller details. A film such as this would pair well with Band of Brothers, or Dunkirk as they would feed off of each other. But as a standalone, Darkest Hour is somewhat lacking.