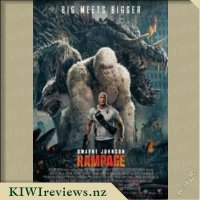 Disclosure StatementFULL DISCLOSURE: A number of units of this product have, at some time, been supplied to KIWIreviews by the company for the purposes of unbiased, independent reviews. No fee was accepted by KIWIreviews or the reviewers themselves - these are genuine, unpaid consumer reviews.
Available:
in cinemas April 2017

Dwayne Johnson stars as primatologist Davis Okoye, a man who keeps people at a distance but shares an unshakable bond with George, the extraordinarily intelligent, incredibly rare albino silverback gorilla who has been in his care since he rescued the young orphan from poachers. But a rogue genetic experiment gone awry mutates this gentle ape into a raging creature of enormous size.

To make matters worse, it's soon discovered there are other similarly altered animals. As these newly created alpha predators tear across North America, destroying everything in their path, Okoye teams with discredited geneticist Kate Caldwell (Naomie Harris) to secure an antidote, fighting his way through an ever-changing battlefield, not only to halt a global catastrophe but to save the fearsome creature that was once his friend. 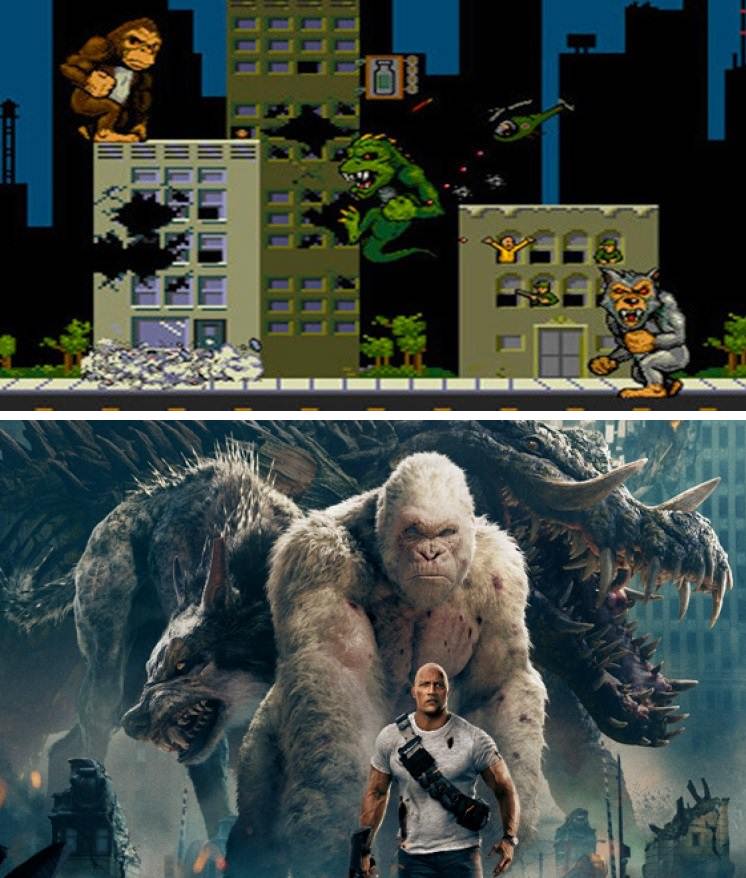 Rampage is based on the 1986 arcade game of the same name. Very simply put, the game revolves around 3 mutated creatures that are trying to destroy cities in Illinois while military units try to stop them. That's it. The characters in the game are George the giant gorilla, Lizzie the giant lizard, and Ralph the giant wolf. As far as premises go, it's pretty basic, which is both good and bad for a film adaptation, because it provides more freedom for the writers, but also means there is less background material to go off of. That being said, it couldn't be anywhere near as bad as the Battleship movie, a.k.a. aliens playing transformer noises featuring Rihanna.

Starring in Rampage is Dwayne "The Rock" Johnson. The actor who is in everything these days (6 large Hollywood blockbusters over the 2016-2017 period), much like Jennifer Lawrence and Scarlett Johannson used to be. Finding his niche in the action genre, Johnson has really managed to shed that pro-wrestling image but is yet to really showcase emotions. Be prepared to see more macho-manliness, stepping up, and figurative genitalia measuring between Johnson and every other male character he interacts with, in this film.

Considering the lack of a backstory in the arcade game, the writers had a great opportunity to come up with motives and deep three-dimensional villains and protagonists, but we end with a film that has a plot aimed towards a primary age child (despite the M rating), but and the parents that would be drawn in purely for nostalgia's sake. The film starts off reasonably well, we get introduced to how these 3 creatures will come to be and are then introduced to the protagonists. The opening scenes are quite brilliant; they originally perplex the audience as you are thrown into the middle of a fracas, they entertain with tense action scenes, they instantly create a feeling of anger towards the antagonist. This is followed by the introduction of the protagonists, and the writers take the opportunity to inject a positive vibe through comedic elements, mixed with their own tension and action.

It starts off quite strong. But then we realise the film is full of expendable characters. And once you get expendable characters, you stop caring about what happens to them. Out of all the cast, there are only really four characters that have any sway in the direction of the plot in the film. Jeffrey Dean Morgan plays a grizzled government agent, who has seen it all, is surprised by nothing and is seriously vibing Tommy Lee Jones' "K" in the Men in Black franchise. Naomie Harris, on the other hand, portrays the convenient plot device, who has the solution to everything. Malin Akerman pulls off a stunning yet crazy performance as the antagonist, assumedly basing a lot of her own performance on that of Christa Miller's "Jordan Sullivan" from Scrubs. Joe Manganiello barely has a cameo; while he does great work and really sells the whole Alien/Predator feel to the "hunt", he was really underutilised.

Am I being too harsh? Am I expecting too much from this film? Perhaps. This was never going to be a film with deep themes and multi-dimensional characters. How does it look then? The CGI is pretty damn good for the most part. Perhaps due to the success of the Planet of the Apes franchise, Hollywood has gotten really good at its computer-generated apes. George the albino gorilla has incredibly realistic hair and body movements, and it was enjoyable to watch. When it got to the other creatures, however, it lost that realistic edge. It certainly looks great compared to the 1986 game, but that's not really a high bar.

As a simple action flick, with giant monsters destroying a city, Rampage is a fun film that is action-packed and uses comedic elements really well. There were more than a few literal laugh-out-loud moments that would keep the positive vibe in the film. If you love your carnage, or want to keep the kids entertained for a bit, Rampage will serve you well.

Bertram Pincus (Ricky Gervais) is a man whose people skills leave much to be desired. When Pincus dies unexpectedly, but is miraculously revived after seven minutes, he wakes up to discover that he now has the annoying ability to see ghosts. Even worse, they all want something from him, particularly Frank Herlihy (Greg Kinnear), who pesters him into breaking up the impending marriage of his widow Gwen (Tea Leoni).