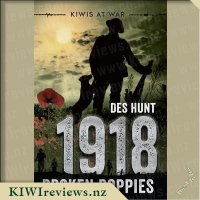 Four Christmases have passed since the world went to war in 1914. Struggling to survive in the trenches amid the terror of gunfire and the whine of warplanes, Kiwi soldier Henry Hunt rescues a shaken little dog. He has no idea he will soon face a disciplinary hearing. To Henry's relief, the Major allows the little fox terrier to live ... this time. Henry finds the dog is not only a comfort to his fellow soldiers on the battlefields of France, but a great ratter too. Together, can they survive the Great War?

This is the fifth and final title in the Kiwis at War series, each offering a unique perspective from a different author. In this book, Des Hunt has based his story on the experiences of his uncles Henry Edward Hunt and George William Hunt, both of whom served during the war.

Marvel Guardians of the Galaxy Vol. 2: The Novel
Rating: 9.3

I was already familiar with Des Hunt's writing, so I was prepared to enjoy this, the fifth and last in a series written by different authors to mark the centenary of the Great War. It was every bit as entertaining and informative as I had expected, and possibly the most enjoyable of the five - if you can describe a book about the death and destruction of warfare as "enjoyable". However, there is comradeship and humour behind the battle lines, and when you factor in the loveable rascal of a canine mascot, the story becomes a compelling read.

The inspiration for the book came from the author's two uncles, Henry and George. George enlisted in 1915 and was placed in the Wellington regiment. He died in a skirmish at La Basse Ville before Henry, who enlisted a year later, could find him. The divisions had originally been organised geographically, but some had sustained more losses than others, so Henry had been placed with the Otago regiment instead of being assigned with other recruits from his area. That made it difficult for him to find George.

This story follows what might have been Henry's experiences in the army, his progression from a raw recruit just seventeen years old to a fully seasoned soldier who had experienced frontline battles, injuries, and coping with the loss of his beloved cousin and some of his company mates.

A high point of the story is the arrival of Poppy, a little dog who is separated from Zoe, the little girl who owns him, while she is being evacuated with her family. Poppy reminds Henry of his own dog, Jill, back in New Zealand, so he rescues her. Poppy quickly becomes a valuable member of the company, catching rats and comforting soldiers who are injured or homesick. Despite the objections of some of the men, Poppy maintains her place as the company mascot and honorary soldier until the war is over. Henry then sets about fulfilling the promise he made to Zoe by returning her pet.

No review of this book would be complete without mention of the title. Poppies are a potent symbol of the Great War and are used today to commemorate the fallen soldiers of both World Wars on ANZAC Day. Their origin was an amazing event which happened on the battlefields of Europe. Poppy seeds can lie dormant in the soil for a long time, but then, once the ground is disturbed, they can germinate. The soil of Western Europe was churned up by shelling and the displacement of soil when trenches were constructed, so any poppy seeds that were unearthed started to grow.

The "broken poppies" which Henry's comrade Mark had pressed and placed in George's writing case for Henry to find were symbols of the men who had fought alongside them both. He had included one for each soldier, some with one petal removed, and some with no petals at all. These were the "Broken Poppies" of the title - the dead, the injured, and the survivors - all together in the same container.

And finally, Zoe's dog, which she had called Puppy because she had not yet chosen a name for her, was renamed Poppy by Henry and his friends as they had misheard what Zoe was calling. The name stuck, and Puppy was forever Poppy from that time on.

I look forward to reading this book again. It does not hold back on the horrors of war but amidst the aggression and bloodshed is the human backstory which gives the soldiers their identity and defines them as ordinary people caught up in a horrific event and surviving any way they can. And, of course, it is Poppy's story too!