ProdID: 7873 - Rebel In The Rye
Directed by Danny Strong 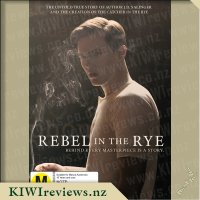 Rebel In The Rye product reviews

The Academy Award winning producers of Silver Linings Playbook, Milk, American Beauty and Sicario vividly bring to life the world of legendary writer J.D. Salinger and the experiences that shaped one of the most renowned, controversial and enigmatic authors of our time.

Set amidst the colourful backdrop of mid-20th century New York, Rebel In The Rye follows a young Salinger (Nicholas Hoult) as he struggles to find his voice, pursues a love affair with famed socialite Oona O'Neill (Zoey Deutch), and fights on the frontlines of World War II.

These are the experiences that will inform the creation of his masterpiece - The Catcher In The Rye - and its iconic protagonist Holden Caulfield. The novel's publication brings him overnight fame and notoriety but also leads him to withdraw from the public eye for the rest of his life. This is a tantalising window into the life and times of a little-understood and reclusive genius who broke the rules and redefined literature.

For many of us, "The Catcher In The Rye" was prescribed reading at secondary school. I remember being quite unimpressed by it when I read it at the age of 14, but when I revisited it some 20 years later I realised how much I had missed the first time round because of my youth and relative inexperience. I found I was looking forward to seeing this film as perhaps it would fill in some of the missing pieces, the life events that formed the background to the story and the motivations that drove Salinger to write it.

The film appeared rather slow to get started, and with the addition of the muted toning in many of the scenes it gave the impression that this would be a movie that leaned towards the "artsy" approach. Not that this is necessarily a bad thing, but I found myself hoping it would not be at the expense of the storyline. There is a fine line between maintaining audience interest and losing them altogether! The French, of course, have perfected this balance.

As feared, the film was rather ponderous in the early scenes, almost as if the director were showing off his command of different cinematic effects! But then, to my great relief, Kevin Spacey burst in and suddenly things started to happen. As Whit Burnett, Salinger's teacher and mentor, he presents the perfect foil to Salinger's ego, matching sarcasm with sarcasm. I enjoyed his performance from start to finish; unlike the rather boring and conceited Salinger, Burnett is all energy and rough edges. And he is more than a match for Salinger - which means that the young author respects him; he is willing to allow himself to be guided by his new-found mentor.

I feel that it is important to read "The Catcher In the Rye" before watching the movie if at all possible. The film includes flashbacks, not always clearly linked to the plot, which assume some viewer knowledge of the book; otherwise, it would not hang together well. Some characters made a guest appearance for no apparent reason: Salinger's first wife featured in one scene but there seemed little point in including her at all when a simple reference might have made more sense. Other characters would have benefited from being fleshed out more - his parents, and his sister, for example. The most significant comment on them was the repetition of the dinner table scenes, where the formal nature of the seating and the stilted movements of the family members were reminiscent of a religious ceremony.

Contrasting with the rigidity of the dining-room scenes were the open-air scenes - at the merry-go-round, or in the midst of the fighting at the front, or even at the hospital. In all of these scenes the characters were lively, moving freely and using their voices to full effect. I would have liked more of the temple scenes too; the monk was an empathetic character who could have been expanded. Just as Salinger himself acquired acquaintances and then dropped them before a friendship could develop, the movie continually mirrors this use-it-once-and-throw-it-away trend! However, in the film's defence, there were some beautifully presented establishing shots in the all-too-brief temple scenes, and another amazing image looking out at the world from inside a typewriter.

Insofar as Salinger is intended to be portrayed as immature, selfish, and unsympathetic despite his undisputed genius as a writer, the film succeeds - in many ways he emerges as an anti-hero. The actors did their best with a script that was not always cohesive; I also wondered whether the expression "warm fuzzies" as mentioned by Dorothy Olding (Sarah Paulson) actually existed at the time in which the film is set. Certainly, Kevin Spacey carries the film; without his presence it would have been rather dull. Be that as it may, it was interesting for me personally. But as I mentioned, you really need to read the book first!

Score: 6.8
Product reviews for listing 3970: Its a wonderful afterlife -  Directed by Gurinder Chadha

The director of Bend It Like Beckham invites you to enjoy a dark comedy about the murderous lengths to which a mother will go. When her efforts to marry off her dowdy daughter are dashed, Mrs Sethi's focus turns from matchmaking to revenge. The series of spicy murders have London police baffled - among them DS Raj Murthy.

Her victims cannot be reincarnated until their killer dies and Mrs Sethi can't leave this world until ... more...