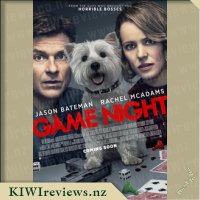 Disclosure StatementFULL DISCLOSURE: A number of units of this product have, at some time, been supplied to KIWIreviews by the company for the purposes of unbiased, independent reviews. No fee was accepted by KIWIreviews or the reviewers themselves - these are genuine, unpaid consumer reviews.
Available:
February 22nd 2018

Jason Bateman and Rachel McAdams star as Max and Annie, whose weekly couples game night gets kicked up a notch when Max's charismatic brother, Brooks, arranges a murder mystery party, complete with fake thugs and faux federal agents. So, when Brooks gets kidnapped, it's all part of the game...right? But as the six uber-competitive gamers set out to solve the case and win, they begin to discover that neither this "game" - nor Brooks - are what they seem to be.

Over the course of one chaotic night, the friends find themselves increasingly in over their heads as each twist leads to another unexpected turn. With no rules, no points, and no idea who all the players are, this could turn out to be the most fun they've ever had...or, it's game over.

Blade of the Immortal
Rating: 7.3

I'm always looking for a good film that provides a good mixture of genres without dropping the ball when it comes to any of its content, and Game Night delivers.

The movie starts with a brief intro to our main couple, Annie and Max, leading to them now married and hosting a weekly game night with the high school sweethearts Michelle and Kevin and Ryan and whoever his flavour of the week is - usually someone supermodel pretty but rather conceited and not particularly bright. The film then introduces us to their neighbour, Gary, who wants to join in but they are avoiding as he's the creepy ex of their friend who no longer joins them for game night. Max's brother joins in the night, promptly acts like an arse and invites them all to his house for a game night to eclipse them all. When there he informs them that one of them will be 'kidnapped' by a troupe of actors and given clues to find him, however things suddenly go awry.

Each of the couples has their own little personal challenges, Michelle and Ryan about what went on when they had a break, Ryan and his date of the night Sarah who is the opposite of his usual choices and of course, Max and Annie who are disagreeing over the start of a family together. We do get a nice amount of focus on the two minor couples spread well through the film but the focus is definitely Max and Annie, not just on their relationship decisions but how they deal with Brooks kidnapping and the subsequent twists and turns, and there are a few so make sure that you're paying attention. Don't forget to throw in the creepy police officer neighbour who makes his own appearances (and is suitably creepy and awkward).

There's plenty of special effects made well use of in this film, going from model landscapes to real houses, to car chase scenes and blood... Everything was done really well, the only time when it didn't feel natural was just before the end credits, though I can't say anything without giving away a big spoiler... However, other than that part, it all flowed really well. Jesse Plemons, in my opinion, really stole the show for someone who was a secondary character, I loved every scene he was in and while he was suitably creepy, I couldn't help but hope he ended up back in the group.

The theatre was in stitches and I certainly enjoyed this far more than I expected, it had a great mix of comedy, action, drama and mystery. If you like going to the movies or watching a good comedy, add this one to your list.

When Marmaduke (Wilson) moves to a new neighbourhood with his family, the super-sized teenage dog soon discovers he just doesn't fit in - literally! But, with the help of his best pal Carlos the Cat (Lopez) and some newfound four-legged friends, Marmaduke may ... more...