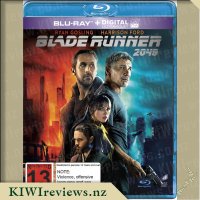 Officer K (Ryan Gosling), a new blade runner for the Los Angeles Police Department, unearths a long-buried secret that has the potential to plunge what's left of society into chaos. His discovery leads him on a quest to find Rick Deckard (Harrison Ford), a former blade runner who's been missing for 30 years.

I actually got this movie confused with the 'Blade' series and was rather confused as to why there were no vampires showing up and instead there was talk of 'replicants' so after fifteen minutes into the movie I paused it and asked my husband to explain the premise to me, since I had obviously never seen the original as it sounded okay I continued on the journey. But I was not prepared for just under three hours of the movie. Unlike my husband I ended up going to bed half way through it and watched the rest the next night where he was up to past midnight watching it.

As much as it was 'viewable' I still found it very slow in places and my mind wandered quite a bit, and, on more than one occasion I found myself picking up my tablet to check something out. It was easy to understand but at the same time it was complicated in areas. I am still unsure why various characters would show up and I don't actually know they brought anything to the story. The acting was alright no one person really stood out for me and I can understand why Ryan Gosling got the part. I find he has a very vacant face and does not express a lot of emotion at the best of times. During the plane crash my husband said that was some great acting but I can not see it, as far as I can tell it was just him being him and showing a lack of anything.

I can understand why the movie won an Oscar for its Visual Effects it really is visually appealing especially when you throw in K's girlfriend -it really is mind blowing. Although, I am still confused as to why a replicant/machine needs to have a girlfriend to begin with. Then you have the memory creator and those scenes alone left me wanting more. The creative process was extremely well done.

I am guessing if you know the backstory of Harrison Fords character the movie would probably make a lot more sense. I didn't want to assume anything so picked up the breadcrumbs as they were thrown out and as K I believed the same outcome. But as the truth is revealed it did make more sense as to various things that had been said previously and as to why she cried when asked if the memories had been planted. I am also unsure why K was required to kill cyborgs, the few he had interaction with seemed fine to me. It did leave me with some questions but not enough to warrant me watching the original for or seeking out the answers over.

My husband was impressed with the movie, but then again, he loves the original where as I found it okay but nothing I would watch again.

I've honestly never been a fan of Ryan Gosling. I've never found him particularly handsome, and I rate his facial expressions along the same vein as Kristen Stewart (an actress I actually had to google "chick from twilight" to recall her name). It was, therefore, no surprise that I found his acting rather wooden and uninspiring. Thinking about his role in the film, I initially thought his role as a replicant was the reason for his unconvincing style, until I remembered the original blade runner film, where the entire crux of the film revolved around whether Harrison Ford's character Deckard, was a replicant or not. Ford's performance had been so human that it became quite the conundrum as it was never properly revealed either way. I would have preferred Gosling to have taken a similar stance on his own character.

The film goes carries on from the original, with amazing breathtaking cinematography, and expansion of the lore and history of the blade runner universe, and while it is full of little bits and pieces that diehard fans will love, it is spread out along the 160+ minute runtime and leaves the average viewer rather bored. Technology and graphics have come a long way since the original, and I really would have loved to have seen more of the gorgeous graphics and environments in this world. The effects were top notch as well, the mix of practical and computer-generated effects did an amazing job bringing back characters from the original (minus the ageing), and creating expansive skylines.

Ignoring Gosling, I found the casting to be rather hit and miss. Leto's performance as Wallace was intriguing, but his presence added very little to the film. Much in the same way of his Joker appearance in DC's Suicide Squad, there was hype about the role, but it was unnecessary. Sylvia Hoeks did a marvellous job running Wallace's affairs and really could have taken on all of that herself without the need for Leto being present at all. Other standout performances came from Dave Bautista and Ana de Amas, who really sold their roles in the film. Bautista especially, really sold the opening scenes, and made me wish the entire movie was more along the lines of an action thriller.

For those wanting to know more about Harrison Ford, take note that he enters the film rather late and while a major character, he has a minor role in this film. Many of the questions that linger from the original film continue to linger, but there are moments and phrases that could be interpreted to answer them, depending on your point of view and how deeply you analyse it.

It may have been the length of the film, but I struggled to really get into the plot. It reads much like the second film of a trilogy, filling in exposition, but really having few story arcs that come to completion in a satisfying way. The twist was well done, but the story still feels cut short. The film is hit and miss for me. Perhaps I need to rewatch the original several more times beforehand to fully appreciate the complexity and layers of the sequel, but as a casual viewer, I left somewhat unsatisfied.

Several months after the events of Captain America: Civil War, Peter Parker, with the help of his mentor Tony Stark, tries to balance his life as an ordinary high school student in Queens, New York City while fighting crime as his superhero alter ego Spider-Man as a new threat, the Vulture, emerges.