This is not the sort of movie you want to watch if you are tired. As it was, it took me two attempts to watch and I was tempted more than once to just turn it off and walk away. But as my curiosity got the best of me, I forced myself to watch to the end. A friend had recommended this movie when it first came out, and to be honest all I remembered that it had Michelle Pfiffer and Jennifer Lawrence in it and that it was Biblical.

The beginning seems harmless enough, you realise straight away that Lawrence is very nervous and has no self confidence and as the movie progresses you find she is in a loveless marriage where her emotions and opinions are completly disregarded. After I got confused by Ed Harris and Michelles Pfeiffers children fighting and them all rushing off to the hospital I turned it off and went to bed. I later spoke to my friend who explained the movie to me from the directors point of view. His mother, also didn't understand it, and he was also a little confused but once you hear the directors vision it actually makes more sense. Lawerence is Mother Nature her husband the poet is actually god and the house is actually earth and the concept is Mother is caring for her house, putting all of her love into making it perfect and we are effectively distroying it.

The movie itself made me so mad and I felt at times the rage inside of me increasing. I was so tense and actually felt like screaming more than once. All I can say is I am lucky my husband was out. I have never seen a movie that envoked that kind of emotional response from with in. I was so fustrated at the pathetic response of the poet to the situation occuring around him or when Mother was asking people not to touch things and everyone was completly ignoring her. When the house started to get ripped apart I was just shocked and then it hit me this is occuring everyday to our beautiful planet and no one is listening or caring.
Symbollic it is fantastic - but then if I had not known the true meaning I think the exercution is poor and would be over a lot of peoples head.

It is not the sort of movie I would watch again, more so because of the physical and emotional feelings I felt during it. However, I have found I have asked various people have they seen to which the response has been 'no what is it about' and each time I have been asked I am at a complete loss as to what to say. When asked is it worth watching (as now on Netflix) I again am at a loss and just say 'it is extremely weird about how we are destroying the earth'. It has left me thinking about it, more the fighting and exercusions and makes me realise how much people suck. So I guess in a weird way it is a great movie - but yet - it really isn't. 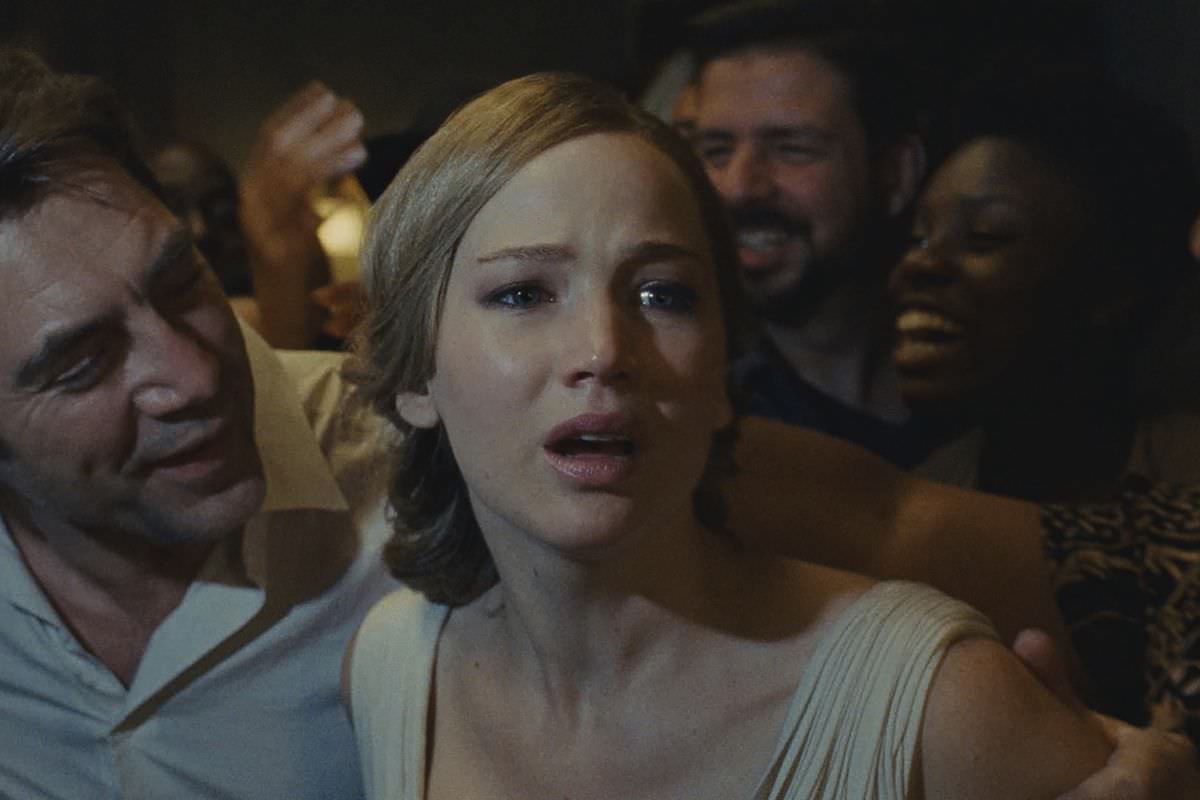 Broadly categorized as a psychological drama, Mother! has a level of twisted imagery and events that lend it more towards the horror category. As arty as a film can be with such names as Jennifer Lawrence, Javier Bardem, Ed Harris, and Michelle Pfeiffer, the film works to remove any unnecessary extravagances, placing the focus purely on the quality of the actors and the depth of the portrayal of the characters. An example of the minimalistic take is how none of the characters are given names; referred to as Mother, the Poet, Man, and Wife, the names are not needed and therefore not known.

The film takes place in one setting; either inside the house or directly outside the house, and follows the point of view of Jennifer Lawrence's character, the Mother, with all shots with focused on Lawrence's face, looking from her point of view, or over her shoulder. The viewer receives no information that the protagonist doesn't have, and it creates a very immersive experience. Seeing all that she sees, it does not take long to start seeing the set of events leading to a chain reaction.

The entire plot revolves around the Bardem and Lawrence's characters and their contradictory viewpoints. Lawrence's Mother, who has fully renovated their home herself, connecting with it on a spiritual level, making the house effectively a part of herself, and whose only want is to spend her time with her husband isolated from the rest of the world. Bardem's Poet, on the other hand, is the ever-obliging host, who craves to please those that worship his work. These contradictory viewpoints begin to clash and escalate as more characters begin to enter the story until the situation devolves into the climax of the film.

Mother! is a polarizing film. You will either love it or hate it. It leaps beyond the boundaries of what is expected from a film and takes the viewer on a journey that will no doubt frustrate and baffle them. Lines between reality and fiction blur as time moves and bounds inconsistently. The film has no filler; every action leads on towards something further into the film, but that is not to say it is easy to follow, not in the slightest. Climaxing with an irreconcilable hallucinogenic fever dream sequence that folds in on itself, we are treated to a vicious cycle that highlights a selfish, narcissistic society which takes what it wants.

An intriguing story, that leaves you with many unanswered questions. The framing and perspectives of the shots are truly brilliant, and the plot is certainly a simple and original idea but is it enough to make it a great film? That is up to each viewer to decide on their own. I was engaged, and I empathised with Lawrence's Mother character, but it is not a film I will feel the need to see again.