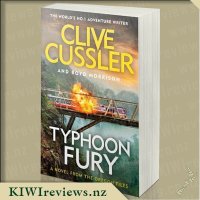 Juan Cabrillo and the crew of the Oregon are about to sail into a perfect storm of danger. Their mission? To stop a new world war...

Hired to search for a collection of paintings worth half a billion dollars, Juan Cabrillo soon finds himself in much deeper waters when he discovers the vicious leader of a Filipino insurgency is using the paintings they seek to finance his attacks. Far worse, Salvadore Locsin has stumbled upon a deadly secret of World War II: a formula designed to create an army of super-warriors.

With Locsin's plan threatening to engulf Asia in war, Oregon's crew must take on the rebel commander, a South African mercenary intent on taking the drug for himself, a swarm of torpedo drones targeting the US Navy, and a gathering megastorm.For Juan and his elite team, failure is not an option. An apocalyptic world war is on the horizon, and only they can stand in its way.

As with so many of Cussler's collaborative works, this one carries with it two distinct flavours - there's the over-arching Cussler universe and key characters, but the plots are as varied as the co-authors. In this case, Boyd Morrison, who has only co-authored one other title with Cussler, and one I haven't read - adds a new flavour to the tales. Being set in the Oregon Files series, this story follows Juan Cabrillo and his team of mercenaries who travel the world in an impressive warship hidden in plain sight as a disgusting tramp cargo ship.

Unlike the previous Oregon Files tales, this one seems to carry more of a personal flavour to it... while the mission is of international importance, the crew seem to get more personally involved and take things quite to heart in many of the pitched battles. And I assure you, the action is plentiful with a lot of pitched battles, compounded and complicated by an impressive array of baddies all powered up on the titular superman-making drug - Typhoon. The majority of the story has you looking at one scenario, but as usual, Cussler throws in a twist that changes the context of the action part-way through without really affecting how the plot plays out. It's a technique I greatly admire in Cussler's works. It's like those pictures that ask you "do you see an old woman or a young woman?" or "which is the front face of the wireframe cube?" It's still the same drawing, but your mind suddenly flips it on its head and shows you something unexpected.

I can't say this is the most riveting of the Oregon Files tales I have come across - there were patches that, at first glance, seemed to be just filling in space to bulk up the word count, but perseverance revealed how there was key plot development tucked away in them as well. I must admit that the "art assessor" character annoyed me far too much to add value, but she was a vital piece in the overall strategy so I guess her role isn't a complete waste of words.

Overall, this was another great book in Cussler's world, and I look forward to reading more such tales. The action is always simmering under the surface when it isn't exploding out into your face, and I love to see Juan making good use of his artificial leg in every tale these days.

Ella is excited to be going on her favourite TV show. Can Olivia help her become a spelling superstar?